Where some see a bridge, others recall a massacre 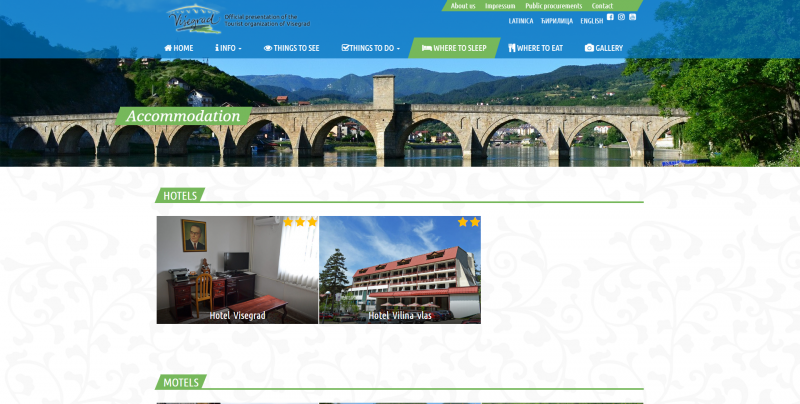 Screenshot of the web page of Tourist organization of Municipality of Višegrad promoting the Vilina Vlas Hotel, a former rape camp and site of other war crimes, as a top accommodation option.

The Vilina Vlas just outside of Višegrad in eastern Bosnia is no ordinary hotel, but you would not know that from the way the Republika Srpska tourism authorities are promoting stays there.

Search for the hotel and spa complex on TripAdvisor and you will find the following notice:

Due to a recent event that has attracted media attention and has caused an influx of review submissions that do not describe a first-hand experience, we have temporarily suspended publishing new reviews for this listing.

The message is likely a reference to an online backlash from Bosniaks after the authorities in Republika Srpska, a Serb-dominated federal entity of Bosnia and Herzegovina, began promoting the hotel as part of a subsidized tourism scheme last month.

But the actual events that make the Vilina Vlas so notorious occurred during the Bosnian War (1992-1995), when the hotel played host to horrendous war crimes perpetrated against Bosniaks and Bosniak women in particular.

No, this is not #TheHandmaidsTale, this is real: The Bosnian Serb Tourism Agency recommends Vilina Vlas – a spa resort/rape camp where women and girls from Višegrad were raped until they got pregnant, many have been killed, just a few have survived. In 1992, in Europe! #genocide https://t.co/H1htnUGclw

Quoted tweet  by @VisitSrpska: If your choice for this year is to visit Višegrad Spa Complex, the Vilina Vlas Hotel enables use of the tourist vouchers for the quests from Republika Srpska, subsidizing part of the expenses for hotel accommodation…

Back in 1991, when Yugoslavia began to splinter, ethnic Bosniaks made up more than half the population of the Višegrad municipality. Pogroms targeting Bosniaks and outmigration have seen those demographics shift drastically — Bosniak returnees now compose less than 10% of the municipality's population.

The town saw some of the worst genocidal atrocities committed against Bosniaks during the war, including two live pyres just two weeks apart in June 1992, which killed a combined total of 123 Bosniak civillians.

These atrocities were carried out by cousins Milan and Sredoje Lukić. Both men were convicted of war crimes at the International Criminal Tribunal for the Former Yugoslavia (ICTY) in 2009.

Vilina Vlas was one of the most infamous of the Serb-controlled rape and detention camps during the Bosnian genocide. Hundreds of Bosniak women were kept as slaves there and sexually assaulted on a daily basis by Serb soldiers, as well as Serb and Russian paramilitaries.

That Vilina Vlas remains a fully functioning resort welcoming tourists every year is bad enough for many who know what took place there.

But the special effort made by Republika Srpska tourism board to promote the hotel on Twitter and Instagram in the last week of June sparked outrage among Bosniaks. On Twitter, many used the term “genocidal tourism” (genocidni turizam).

Sign this petition to get google remove this rape camp being marketed as tourist destination, from their websites.@Google Google: Remove Vilina Vlas hotel (as a tourist site) from Google search and Google Maps. – Sign the Petition! https://t.co/j2MY4XnXVX via @Change

Such whitewashing is not new in Višegrad. Local tourism authorities love to promote the town's old Ottoman bridge — a gem of Ottoman era architecture.

Yet foreign tourists rarely learn during visits to the town that the bridge was a site where the town's Bosniak Muslims were slaughtered en masse.

Nor do they learn that the town's mosques, which were built during the same era, were all destroyed during the Serb-nationalist onslaught.

On some occasions, genocide denial has taken a more active form. In January 2014, Republika Srpska authorities forcefully removed the word “genocide” from a memorial stone in Višegrad's Bosniak Stražište cemetery. As well as trying to demolish one of the houses where people were burned alive in June 1992. Rebuilt by returnees, it now serves as memorial.

The extreme violence and depravity witnessed in Višegrad and all along the Drina Valley, as well as in towns and hamlets in northwest Bosnia and Herzegovina during those years were all part of the genocidal policies implemented by the Army of Republika Srpska and various paramilitary groups under command of General Ratko Mladić, a convicted war criminal.

Their success in was partly due to the fact that international attentions were trained on the siege of Sarajevo. 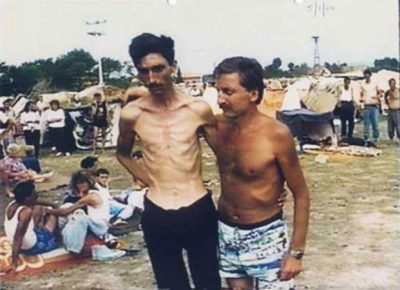 Detainees of Trnopolje Concentration Camp near Prijedor, Bosnia-Herzegovina, 1992. Photograph provided courtesy of the ICTY via Wikipedia.

Koljević taunted the journalist over it taking him and his colleagues so long to discover a network of Serb-run concentration camps in the region —  Omarska, Trnopolje and Keraterm.

So you found them! Congratulations!  It took you a long time to find them, didn’t it? Three months! And so near to Venice! All you people could think about was poor, sophisticated Sarajevo. Ha-ha!

Building on top of bad memories

Emir Kusturica, an internationally acclaimed Serbian filmmaker, who after the breakup of Yugoslavia also started several tourist businesses, has also found a home in post-genocide Višegrad. 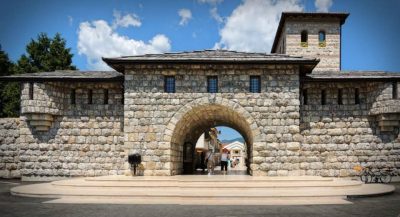 In 2011 he started a project called Andrićgrad (Andrić Town) named after the Yugoslav writer and Nobel Prize laureate Ivo Andrić, whose historical novel The Bridge on the Drina is centered on the old Ottoman bridge in Višegrad. The complex, also known as Kamengrad (Stone Town) is modelled on a medieval fort.

The Andrićgrad complex was also built on the site of a former sports center that was used as a detention camp for Bosniak civilians during the genocide ten years before.

Kusturica's fervent advocacy of Serbian nationalism is not been well known outside of the region of former Yugoslavia.

For those acquainted with his political activities, however, it will not surprising that he would make a home in a place where new and old Serb-nationalist mythology come together.

In 2012, the Constitutional Court of Montenegro threw out of court the filmmaker's defamation lawsuit against Montenegrin writer Andrej Nikolaidis. Kusturica had sued Nikolaidis for pointing out in 2004 that Kusturica's post-war films were either funded by the Milošević state apparatus or the post-Milošević Serbian state with a single goal in mind: To advance the Serb-nationalist narrative.

In post-genocide Višegrad, Kusturica found a place to set this narrative in stone.