‘African art has nourished all civilizations': A Conversation with Algerian artist Rachid Koraichi

Paris-based Algerian artist Rachid Koraichi, 73, is known around the world for his use of numbers, letters, mystical symbols and signs in his artworks. He is also an outspoken critic of the challenges people regularly face in the Middle East and North Africa, from racism to immigration to poverty.

“We cannot sit still and work in a bubble without thinking about our environment and what surrounds us,” said Koraichi in an interview with Global Voices. “There is still enormous suffering in many countries.”

In 2019, in response to devastating waves of migrants losing their lives in search of a better life, he created a cemetery in Tunisia called “Jardin d’Afrique” (“Garden of Africa”), to serve “as a burial site and memorial for migrants who have died in the Mediterranean Sea.” Dozens of drowning victims have already been buried in the cemetery.

Koraichi’s worldview is heavily influenced by Sufism, poetry, philosophy and Quranic verses, and his works have been exhibited throughout the world for decades, from solo exhibitions in New York to art fairs such as Frieze and the 1-54 Contemporary African Art Fair.

Rachid Koraichi, from the series A Nation In Exile.

A painter, sculptor and calligrapher, Koraichi's work incorporates poems and quotes from Sufi mystics such as Rumi and Al-Arabi and Palestinian poet Mahmoud Darwish and creates a mysterious and moving universe that offers the audience the chance to enjoy its beauty, regardless of the riddle the words may, for many, pose.

I express my appreciation to Dheeya Somaiya of Aicon Art for making this interview possible. Excerpts from the interview follow:

Omid Memarian: What is your strongest inspiration, something that has driven you to create art for decades, whether sculptures, paintings, or ceramics?

Rachid Koraichi: I have realized the dream of my own mother. My mother drew a lot, even as a young girl. She received France's grand prize for drawing (at that time Algeria was a French colony). I have evolved in this direction, often under her gaze. When I was working, she would stand behind me and see where I was at, how things were going, how the canvas was developing and so on. For me, it was this sense of my mother looking over my shoulder that was very important.

It was really a continuation of what she would have liked to do in her youth and perhaps in her adult life, something she could not achieve for many reasons. She had to stop her studies after she got married. She had a lot of children, which actually meant she was not able to do what she wanted to do.

When I picture my mother, I always see her cooking for the whole family, then she moves and stands behind me, looking at a painting I have been working on for a few days, all without saying a word. She leaves and, from time to time, she comes back again. I still feel her eyes on my back, without realizing it; the tenderness, the affection and the desire for her son to make art. 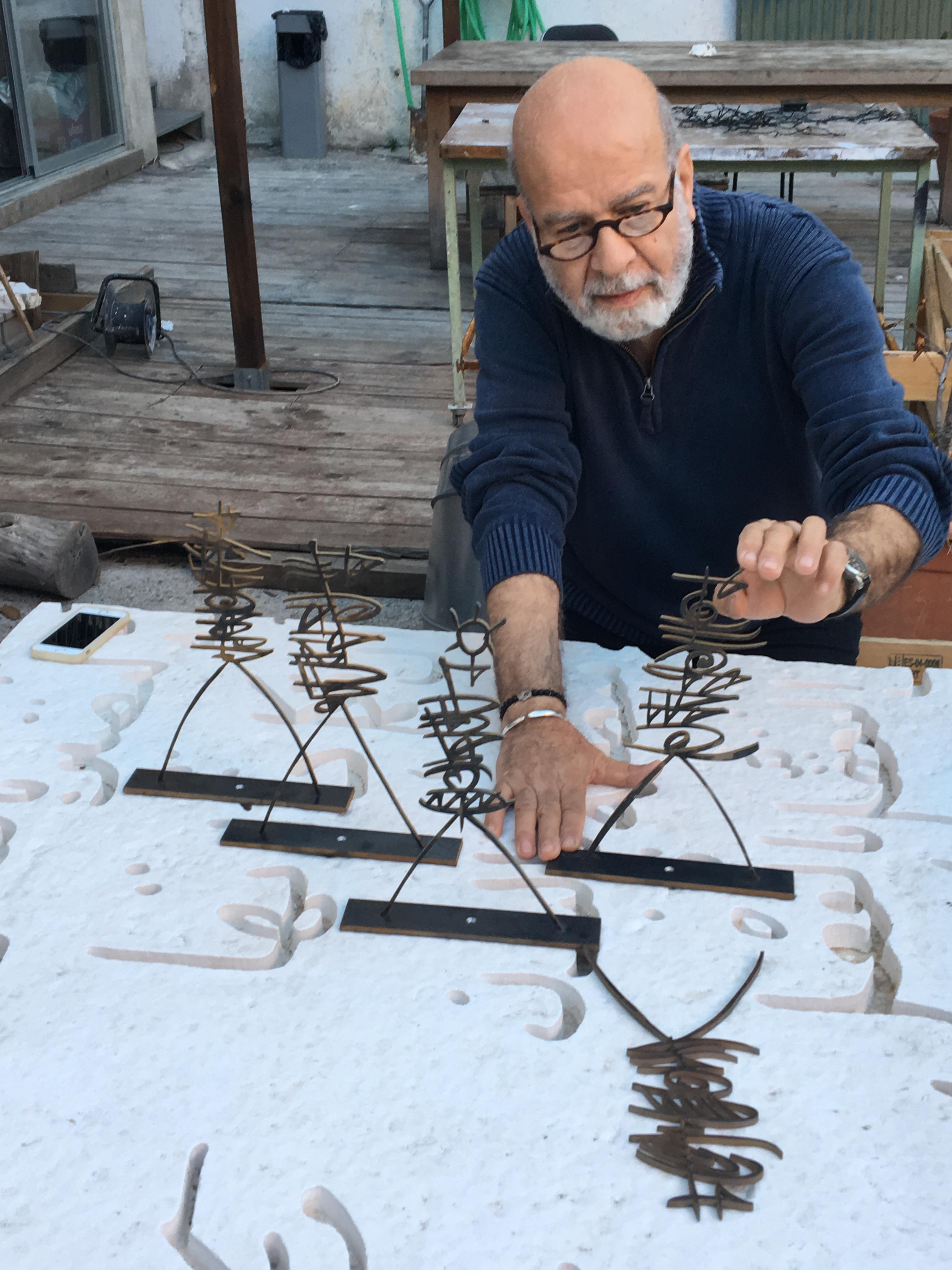 OM: Mahmoud Darwish, the renowned Palestinian poet, has a very strong presence in your oeuvre, including your exhibition, “Path of Roses/Beirut’s Poem/A Nation in Exile.” What's your connection to him and his poems? And how he has persistently been a part of your visual vocabulary?

RK: The bond and connection with Mahmoud Darwish goes back several decades. Certainly, Mahmoud Darwish is a significant poet of the Palestinian cause, which has also proved to be a great cause for people across the Arab world, the Islamic world, and people in all countries who seek peace and true decolonization, because today the history of Palestine poses questions for all of us about its past, its present and certainly its future.

When Mahmoud Darwish died, a three-day period of national mourning was announced—which is rare in a state that barely exists as a defined territory, especially for a poet. This speaks to his profound importance.

Mahmoud left Beirut and settled in Tunisia where he was allocated a house in Sidi Bou Said. That's where I had a workshop. This house belonged to my friend, the painter Ali Belaada. He was an artist and a great man. We were neighbors. Mahmoud liked to cook but I did not, so that was the beginning of what became a strong bond. We saw each other every day, we spent the afternoons and evenings together, and then one day I said to him: “Listen Mahmoud, as long as you're here, as long as I'm here, let’s create as much as we can together, take things forward, reflect on them.”

What interests me in Mahmoud Darwish is his writing: the moment, the story, the pulse that triggered the writing of the poetic text. It was not about illustration—I'm not an illustrator, I'm a visual artist.

I also connected with Mahmoud Darwish over Jalaluddin Rumi who was the spiritual father of Dariush. There was work around his spirituality related to dance and music, and this in particular countered the Islamists who forbade radio, television, music, dance and the arts. Rumi is a great Islamic mystic, who anchored his philosophy and thought. Dance as an element is a fundamental axis of his philosophy and mysticism.

OM: What is the role of artists, particularly those who have access to global platforms in both shaping and shifting narratives to confront major issues of our time, such as immigration, racism and intolerance/injustice?

RK: We cannot sit still and work in a bubble without thinking about our environment and what surrounds us. There is still enormous suffering in many countries.

Look at the experience of independence: unfortunately almost all countries that revolted against Western colonization found themselves under the dictator's boot in their own country.

It is serious. Before, we had a clear cause for which we struggled. Many were even willing to die for it. But today, we see our leaders plunder their countries and their people. We cannot sit idly by and accept this. Look at Algeria: after seven years of horrific wars, we wanted a level of existence that they did not give us. Our leaders continued to behave almost like dictators, torturers, occupiers. Maybe things will change; the world has changed and we hope things will be different.

Today we see clearly the acts of racism that are still happening in North America, we see very well acts of racism from one tribe to another in Africa, and how one tribal leader raises his population against their neighbors. Today, in many countries, we live as if we had learned nothing from the history of our continent.

We artists are questioned, we are obliged by our conscience, to take a stand, it is impossible to remain inactive and do nothing.

OM: Words, numbers, symbols and signs are some of the major elements that you draw and visualize in an aesthetically beautiful and sophisticated harmonic way. What’s your connection to the numbers and words in your works?

RK: I think that numbers chart the paths of our existence. From conception to birth, to life, to the beginning of life: this is a journey that is peculiar to us. The Arabs have invented quite a few things, including the famous Arabic numerals with which we work, the talismans and the elements found in the architecture of texts or talismans have always been the basis of pattern structure of drawings and paintings. It is this form of magic that is not black magic or simply magic, it is really an algebraic, mathematical, philosophical and also mystical reflection that comes from the mystery, the mystery of writing, the mystery of the figure.

I have always been interested in the writing of letters, the writing of words, in composition that becomes almost minimalist. It may be a form of cannibalism: of all that the eye sees, the things on which the gaze arises. After all, there is the evolution and reflection that the brain makes and that also our sensitivity and our way of digesting and seeing what all that can give and how to pass it to the other.

African art has nourished all civilizations, all cultures. Artists like Picasso, Matisse and many others drew heavily and deeply into African art. Because this land is generous, it is fertile, it is truly great. Really we owe a vote of thanks to this wonderful continent that allows us not only to exist but also to give lessons, even if some people want to push us into the corner as we are sitting at the back of the class. We are not sitting in the last row of the class. We are the first in the class, except we saw our cultures looted, and we fade from time to time. Unfortunately, in our continent we let others really loot us quietly and at all levels.

OM: As cultural/religious symbols and also calligraphy are dominant in your artworks, how, in your opinion, is your work communicated to an audience who might have a different cultural and historical background?

RK: I think that all humans can decode aesthetic and beautiful things. When I see myself in the exhibitions on the Mayans and the Incas, the Egyptians, African art and others, the audiences are mixed. An object has a value and life, it’s loaded and it’s not just a matter of aesthetic beauty.

People all come with their life stories, with their formations, their cultures, their backgrounds, and try to apprehend things. Maybe we do not all apprehend them in the same way, but I believe that every human has a certain sensitivity and uses it.

I think about the history of art in passing time, that makes a work continue to exist or disappear on its own. It goes back to the time of Michelangelo or Leonardo da Vinci or others who came before them and even the people of prehistory, when they drew on the cave walls, they did not think for a moment that it would last centuries or millennia.

People did things for the sake of beauty, but it was also a time when they were in a desert or were in a cave, and they wanted a playful way of painting on the walls. Even today, you will see children pick up pens and draw on the wall or table of the house.