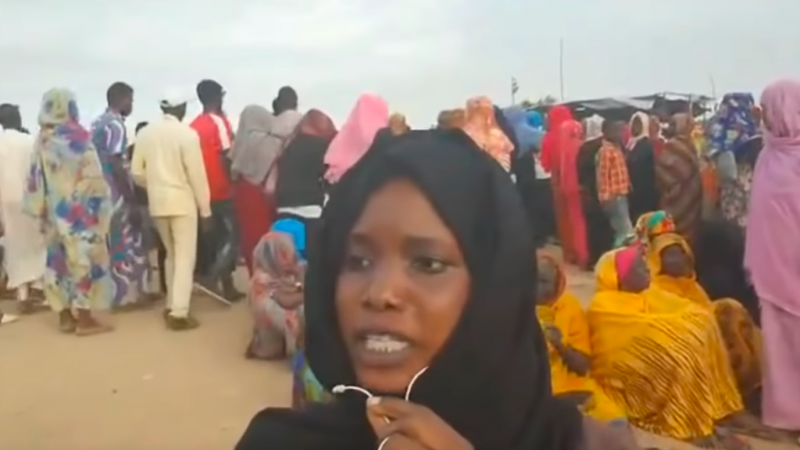 Thousands of protesters gather at a sit-in in Nertati, Central Darfur, Sudan, to make demands for peace and security in the region, July 3, 2020. Screenshot from a report by Sudan YouTube.

As the world continues to combat the coronavirus pandemic, citizens in the Nertati region of central Darfur, Sudan, are rising up to demand security and peace.

On June 28, citizens gathered for a sit-in that continues today with several key demands: An end to armed militia attacks on civilians, disarmament, the arrest of perpetrators and agricultural protection during the harvest season.

About 3,000 citizens have gathered in front of the army garrison in Nertati, with support from neighboring villages and towns. Resistance committees from the town of Nyala, southern Darfur, marched together to Nertati to support protesters at the sit-in.

Since at least 2003, the region has been known for war and armed conflict, having suffered from major insecurities after years of war between rebel groups and the government-supported Janjaweed, armed Arab groups supported by then-ruler Omar al-Bashir. The war in Darfur claimed the lives of over 300,000 people and displaced at least 2.7 million people, in what several human rights groups described as genocide.

When Bashir fell from power in April 2019 after a series of revolutionary uprisings and protests that led to his ouster, a governmental civilian-military power share was established. Their plans to resume peace talks have faltered in Darfur, and until now, insecurity in the region continues with intercommunal, ethnic violence between Arab and non-Arab groups.

The sit-in has received a wide popular and official response, as Sudanese activists have created hashtag #كلنا_نيرتتي, which means “We are all Nertati.”

The revolution will not end, unless all its demands are fulfilled. The Nyala march arrives to Nertati to support the sit-in and fulfill all the demands.

The people of Nertati annually face the threat of armed robbery of agricultural crops and the killing of civilians by armed militias. People also suffer from intercommunal violence due to the widespread availability of firearms in Darfur, despite the government's efforts to disarm civilians.

In October 2019, two underage girls were raped near Nertati by militiamen.

In January 2017, Janjaweed militia killed 10 people and injured at least 60 in a retaliatory attack due to the death of a militia member in Nertati.

These are just some of the more recent examples of why citizens in the Nertati region have decided to hold a sit-in.

Many Sudanese netizens on Facebook added a cover to their profile pictures to show their support for the sit-in.

The Sudanese Professionals Association (SPA) issued a statement published on Twitter announcing its full support for the sit-in and its demands. The SPA described the Nertati sit-in as “a new stream that flows into the course of the Sudanese people's battle.” It speaks to the proven power of peaceful protest to access human rights and also speaks to the urgent need to stop the war and end policies of marginalization, human rights violations and the chaos of an illicit arms trade.

This netizen shared photos of protesters holding signs against the proliferation of weapons in Darfur:

Over the last week, several photos circulated on Twitter of the large crowds gathered with their demands made clear:

More than 3,000 citizens enter their fourth day as they sit in Nerti Central Darfur, and in front of the army garrison demanding an end to the continuous violations achieving peace, the return of the displaced, and retribution for the martyrs.#كلنا_نيرتتي pic.twitter.com/ucMnhSSRRh

The demands of our people in Nertati, in the state of Central Darfur, are just and deserving demands. I sent a government delegation to visit and meet the protesters to work to achieve their demands to ensure the security and stability of the region. We bow in appreciation and respect for the civilized form of the sit-in and continuous peaceful expression, may God preserve Sudan and the people of Sudan.

Since 2019, Sudan’s transitional government has been working hard to make peace and manifest social justice. This is a chance for them to prove their seriousness in achieving these goals.

Before the Sudanese revolution, citizens were not allowed to talk critically about the government, let alone protest vocally against them. Today's sit-in at Nertati is a sign of a new, bright Sudan where citizens finally have the right to freely express their concerns and calls for justice.