Made in China: The draconian details of Hong Kong's national security law 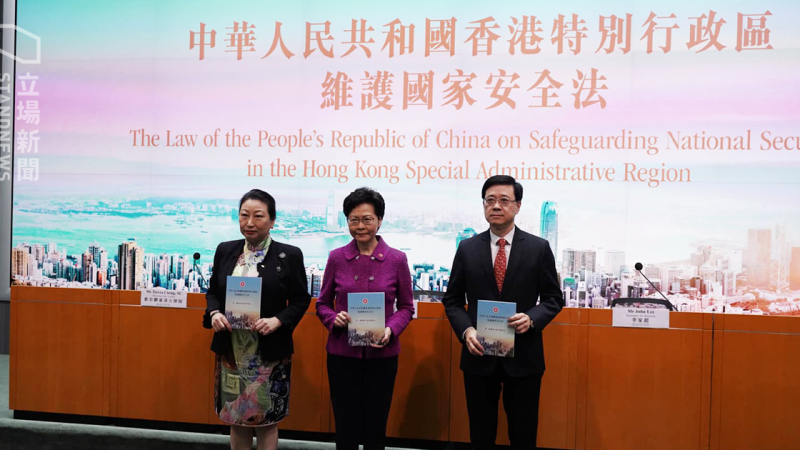 The text of the newly enacted national security law of Hong Kong (HKNSL) was first released to the public at 11:00 PM local time on June 30. It was not passed through Hong Kong's legislative council (Legco) and went into effect immediately.

The law defines four kinds of criminal acts — secession, subversion, terrorism and collusion with foreign power — in vague terms that can criminalize a wide range of speech and protest acts.

The maximum penalty for all these offences is life in prison.

The implementation of the law is under China's purview and mainland security agencies will not have to follow local Hong Kong laws during operations in the megapolis.

For this reason, many are proclaiming the end of “One Country, Two Systems.”

Major news outlets have developed explainers of the law.

Here we take a look at some of the major concerns as raised on Twitter.

Like many Hongkongers, China reporter Allen-Ebrahimian was taken aback upon reading Article 38 of the law:

Oh my god am I reading this right???

Article 38: The law applies to persons who do NOT have permanent resident status in HK and commit crimes under this law OUTSIDE Hong Kong.

Did Beijing just grant itself sweeping extraterritoriality to…everyone on the planet?

Indeed, according to article 38 of the law, any individual that supported Hong Kong's protests for political autonomy could fall under the law's jurisdiction when entering Chinese territories including Hong Kong and Macau.

The majority of the individuals targeted would be overseas Chinese and Hongkongers holding foreign passports, but foreign organizations and nationals could also be subjected to the law if it were found out that they were committing any of the five illegal activities stated in article 29:

- waging a war or threatening to use force to seriously undermine China's sovereignty, unification and territorial integrity;
– seriously disrupting the formulation and implementation of laws in HK and China;
– rigging or undermining an election in HK;
– imposing sanctions or blockage, or engaging in other hostile activities against HK and China;
– provoking by unlawful means hatred among HK residents towards HK and the Chinese government.

Against this background, Canada which has seen two of its citizens jailed for spying in China has issued a travel warning for its citizens regarding Hong Kong:

#HongKong: National security legislation came into effect on July 1. You may be at increased risk of arbitrary detention on national security grounds and possible extradition to mainland China. https://t.co/au9O2eyPsm pic.twitter.com/tbb4e37UU8

Vague definitions, criminalization of protests against HK and Chinese governments

The vague definition of offences can be seen throughout the law. For example, physical assault and vandalism of private and public facilities can be interpreted as terrorist activities under article 24.

As pointed out in a statement by Amnesty International, the definition of “national security” in the newly enacted law is so vague that it prevents anyone from knowing how and when they might transgress it.

Such a vague definition could result in the criminalization of online speech. In fact, said Beijing’s Hong Kong and Macau Office deputy head Zhang Xiaoming in a press briefing, the meaning of inciting hatred could be as broadly defined as spreading rumors about HK police force.

Under this definition, many political slogans, like the popular slogan “Corrupt cops, may your whole family die!”（黑警死全家！) that condemn police violence in protests, could be viewed as undermining national security.

As previously revealed, Beijing will set up a National Security Office (NSO) in Hong Kong to oversee the local implementation of the law, collect and analyse national security intelligence as well as handle national security offence cases (article 48 and 49).

Yet, many were shocked to learn that article 60 specifies that Beijing’s secret police shall not be subjected to local jurisdiction when performing their duties:

Really let this sink in: the NSL creates a secret police branch in Hong Kong that is not subject to HK law. They can do anything, wave an ID at local law enforcement, and walk away. The potential for abuse is infinite.

Article 55 meanwhile gives that NSO the power to exercise jurisdiction over cases under three sets of circumstances:

It is worth noting that it specifies in article 16 that the Hong Kong police's national security department head must “observe the obligation of secrecy”, which means the head shall not answer to public inquiries, including inquiries made by the Legislative Council, on the department's work.

It is also worth noting that the department will be able recruit qualified professionals and technical personnel from outside Hong Kong, most likely from mainland China.

Secret trial will become a legitimate practice as article 46 gives the Secretary of Justice the authority to decide on whether a case shall be tried without a jury in High Court on the grounds of protection of state secrets, involvement of foreign factors, protection of personal safety of jurors and their family members, among others.

There is no other local institution, not even the court, that can question the decision made by CSNS, as article 14 of the law gives immunity to the authority from judicial review.

A number of law professors pointed out that the new law will undermine the common law practice in Hong Kong, as the power of interpretation is in the hands of the Standing Committee of the National People’s Congress (NPC), according to article 65 of the law. HK-based lawyer Antony Dapiran explains the situation in plain language:

What does the national security law mean for HK’s rule of law? We now have a major piece of criminal law, with penalties of up to life imprisonment, which no HK lawyer or judge can definitively interpret, advise upon or apply. Think about that.

Even without Beijing’s direct intervention, the power of the Hong Kong Chief Justice is seriously undermined, as according to article 44, the Chief Executive was given the power to appoint the judges that will handle national security court cases.