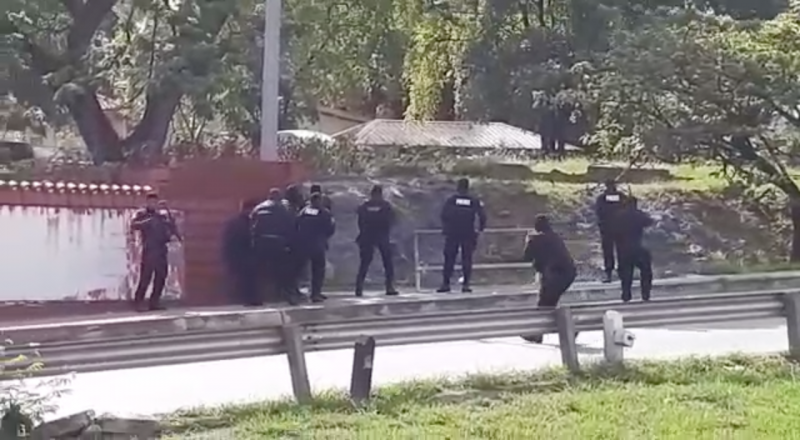 Screenshot of a video shared via WhatsApp and broadcast in a TTT Live Online video, showing police officers returning fire against protestors in east Port of Spain, Trinidad, on June 30, 2020.

On Saturday, June 27, hours after police officer Allen Moseley was shot dead in Morvant, a depressed area in the east of Port of Spain, Trinidad and Tobago's capital, officers from the Trinidad and Tobago Police Service's (TTPS) Guard and Emergency Branch—the unit in which Moseley served—went into the district and killed three men.

The police claim they were fired upon by the occupants of a vehicle, but security camera footage of the incident circulating via WhatsApp shows at least one of the men raising his arms in surrender.

Clinton, who was acquitted of theft charges laid against him a few years ago, was suing the state for police brutality over a related beating incident that left him in hospital for weeks.

Lawyers representing the families of two of the deceased referred to their deaths as “extra-legal,” “arbitrary” and “summary executions,” and demanded that the officers involved be suspended from duty while the investigation takes place, a call that was echoed by at least one newspaper editorial and the NGO Womantra.

Commissioner of Police Gary Griffith and Alan Miguel, Chief Investigator at the Police Complaints Authority, the statutory body charged with independently investigating complaints against the TTPS, stated that an investigation the killings had been launched, but on the morning of June 30 the protests continued, blocking main transportation routes in and out of the capital city as people processed through the streets demanding justice and chanting “Don't shoot!”

Some demonstrations reportedly turned violent; at least one video shared on social media channels showed protestors shooting at the police and officers returning fire. A third-floor window at the attorney general's office was shot at. Protest actions also mushroomed, spreading to areas outside of the capital.

At about 11 am on June 30, Minister of National Security Stuart Young held a press conference in which he stated that community residents were being paid to cause civil unrest. He suggested that citizens should consider “who stands to gain” in such circumstances, making the point that “criminal elements are not always who we call gang members”. Protestors have refuted claims of payment.

One aspiring politician, Fuad Abu Bakr, son of Yasin Abu Bakr, the leader of the insurgents who staged an unsuccessful coup d'etat in 1990, was arrested, allegedly for disturbing the peace. Trinidad and Tobago is scheduled to hold general elections later this year.

The unrest was quelled by the authorities shortly after noon Trinidad time (UTC−04:00) on June 30, but the online discussion continued.

Youth activist and law student Kareem Marcelle, who has been advocating for justice in the deaths of three men, condemned the violent protests, explaining that responding to acts of illegality with other acts of illegality is counterproductive. In a public Facebook post, he pleaded:

Personally, I don’t support not encourage violent or destructive Protests! I’m begging y’all let’s not take away from what we want! We need Public Support for this! We can’t hurt nor distress the very same people we want to support our Cause!
Let your voices be heard but PLEASE operate within the confines of the LAW! Don’t defeat the Purpose PLEASE!
Right now the families are cooperating with our Legal Team, the PCA and the TTPS! Let’s not mess this up! Justice have to and will be served!
#MorvantBlackLivesMatter

The unrest is also happening against a disturbing backdrop: over the past year, police killings in Trinidad and Tobago have increased by a startling 86 percent, with 43 people shot dead by police officers so far this year. Facebook user Terry-ann Roy was disturbed by the statistics:

Yal sharing a pic of one of the victims with a gun as if that negates the fact that we have a thing called DUE PROCESS and that the police aren't judge jury and executioners!
All that shows is you have no understanding of what justice means.
#morvantblacklivesmatter

Such protests are also happening within a social system that makes it difficult for people from depressed communities to rise above their current circumstances, reigniting conversations about equitable wealth distribution, systemic racism and police abuse. According to Kareem Marcelle:

Once you’re a young black man from a ‘Hotspot’ and you’re killed by Police Officers; there are many persons in society that AUTOMATICALLY Presumed that:
1. You’re a Criminal
2. Police deserve to kill you
3. Police are always right
4. Your life don’t matter
5. You’re Guilty by default
You know what is the WORST part of it all? Many times its our OWN Black Brothers and Sisters pushing this agenda! And THAT is PRECISELY why many Police Officers feel as if they a Judge, Jury and Executioner!
YOU Empower them when you defend their Actions!

For all those who are wondering why protests are happening pic.twitter.com/Lzob1fhv9j

Still, many social media users remained at opposite ends of the divide:

Riots are the language of the unheard.

Stop policing the people who are the victims of police brutality and instead police the actual police. It's their actions under scrutiny… Not protestors.

While attorney Justin Phelps suggested that the response “needs to be far broader than the investigation of the one shooting”, Minister Young has tried to focus on the “robust” investigatory process of the PCA even as businesses in and around the capital city made the decision to close early, and the US Embassy in Trinidad and Tobago issued a security alert related to “civil unrest”.

Adding fuel to the fire was yet another police killing, this time of a woman in the disadvantaged area of Beetham Gardens. The incident sparked fresh protests in the presence of police officers. The police service put out a press statement shortly thereafter:

The Trinidad and Tobago Police Service (TTPS) wishes to assure the public that the well-orchestrated plan to destabilize the country by a few, has been quelled. So far, 72 persons have been arrested, and others are expected to be charged when investigations are completed.

There has been one casualty — a woman — and investigations are underway to determine the cause of her death.

Intelligence has revealed that this was an orchestrated plan that was led by several gang members, whereby the intention was to use the shooting of the three young men a few days ago, as a front to cover the planned plot to shut down the country.

Amid some public scepticism over the alleged destabilisation plan, the release also stated that the police force remains on high alert, with the nation being kept “under heavy police surveillance” for the next 48 hours.