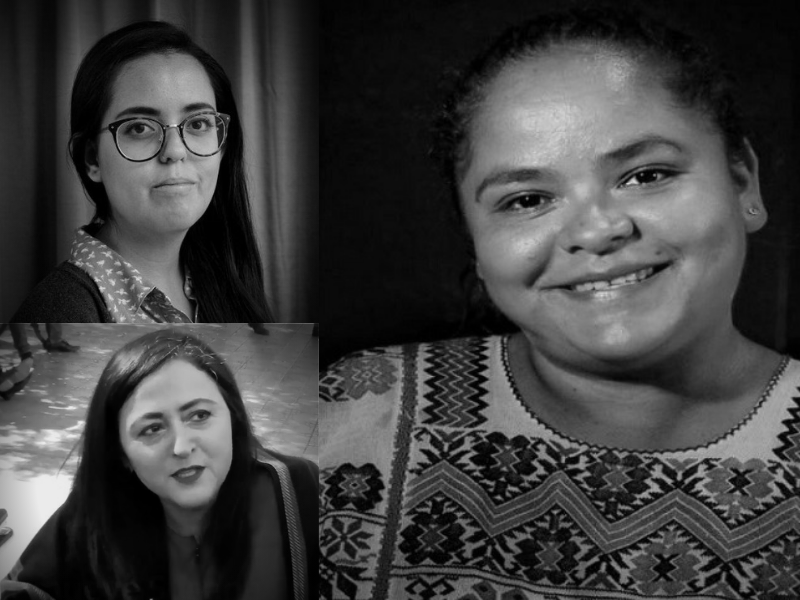 Susana Prieto, Claudia Hernandez [1] and Kenia Hernandez [2]. Montage made by Global Voices, of photos by IM-Defensoras [3] and a screengrab from a video by Milenio [4].

The health emergency caused by the COVID-19 pandemic has not diminished the threat of intimidation and violence faced by Mexican activists, human rights defenders, and journalists. The month of June saw cases [5] of assault, death threats and arrests of some of these human rights defenders on potentially trumped up charges.

On 8 June, Susana Prieto Terrazas, a lawyer committed to defending workers’ rights in the factories of Matamoros city in northern Mexico, was arrested [6] by local police on charges of “rioting, threats and assaults on public servants”. Prieto Terrazas was involved in creating a labour movement called Movimiento 20/32 [7]. At the beginning of 2019, this movement started a strike with thousands of workers to demand a salary increase and better working conditions.

Various organizations in Mexico, such as trade unions and human rights defenders, consider [8] her a political prisoner who is being punished for exposing irregularities and corruption by transnational companies. Currently, Prieto Terrazas remains in prison waiting for clarification on her legal status.

Two days before Prieto Terrazas was arrested, on 6 June, feminist activist Kenia Hernández was arrested [9] after being stopped by police in the state of Mexico [10] and detained along with three minors who were traveling in her vehicle.

“During the arrest, Hernández and her three companions were forced out of the car in which the defender was being driven. She was held at gunpoint and her companions were beaten. They all had their belongings taken away and were not informed of the reason for their arrest,” said the Zapata Vive [11] Collective [11], to which the activist belongs. Kenia Hernández was also imprisoned, although five days later she was released from jail to attend the proceedings against her under probationary measures. In her statement broadcast online, Kenia said:

“They couldn't even frame me (…) When they arrested me after the demonstration they didn't tell me why”.

#Live: Statement on the release and legal status of #KeniaHernández

A day earlier, on 5 June, human rights defender Claudia Hernández was arrested [1] by agents of the San Luís Potosí state police while participating in a demonstration to protest the extrajudicial killing of Giovanni López.  [16]López was a young worker who lost his life after being restrained by police who arrested him for allegedly not wearing a mask while outside his home.

According to a statement by the Mesoamerican Initiative [17] of Women Human Rights Defenders, Claudia attended the demonstration to conduct observation and mediation work during the march. After being arrested, she was held incommunicado. Like Kenia Hernández, Claudia was released, but subject to proceedings with probationary measures.

During the month of June, threats and intimidation extended to organizations as well as the individuals mentioned above. On 15 June, members of Consorcio Oaxaca [22], a feminist organization that promotes women's rights and gender equality, found a black bag containing pieces of meat (apparently an animal head) with a threatening and misogynistic message at the door of its premises. State actors, like in previous cases, are accused of the threats.

According [23] to the organization, there have been several incidents of intimidation since they launched a campaign to demand justice for femicides committed in Oaxaca state.

In this case, the Inter-American Commission on Human Rights (CIDH) urged Mexico to clarify the incidents against Consorcio Oaxaca. It has pushed for the adoption of protective measures for the organization as well as Soledad Jarquín, a feminist journalist who is part of Consorcio Oaxaca and mother of María del Sol, a victim of femicide. Jarquín has received [24]threats for years while demanding justice for the murder of her daughter.

The #CIDH notes that @consorciooaxaca has connected the act of intimidation to their struggle for justice in the femicide of #MaríadelSolJarquín in Juchitán, Oaxaca in 2018, which has implicated Oaxacan state officials. #Women #HumanRights

The #CIDH urges #Mexico to clarify the facts, considering as a first hypothesis the advocacy work carried out by @consorciooaxaca and to adopt the necessary measures to protect the organization from threats and especially Soledad Jarquín and her family. #HumanRights