Has COVID-19 provoked a crisis of faith in Georgia's Orthodox church?

Despite restrictions, the church insisted on holding easter services 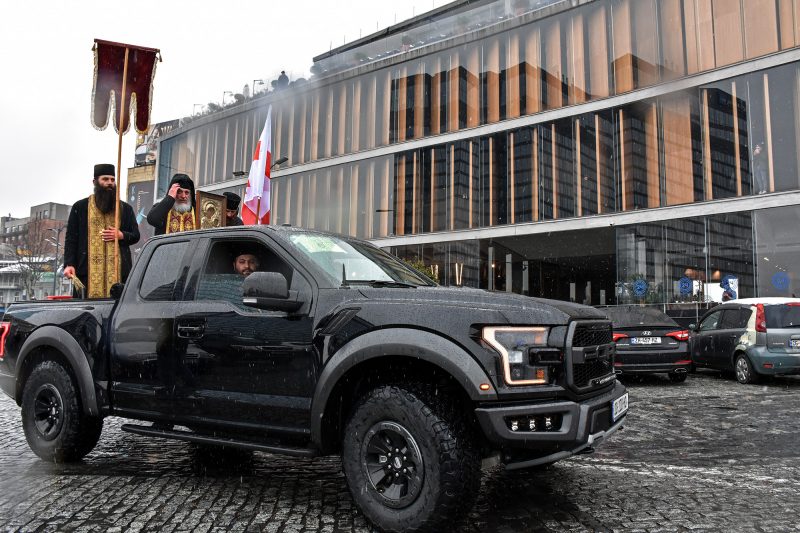 The COVID-19 pandemic has affected the world highly unevenly; Georgia has surprised the world with its success in the fight against the virus.

There are different explanations for that success, including accusations that the true scale and real statistics are being hidden (according to the Johns Hopkins University Map, on June 29, the country had 926 confirmed cases and 15 deaths). Whatever the real story turns out to be, the first wave appears to be waning, providing an opportunity to reflect on the response of important actors and institutions in this country in the South Caucasus.

The Georgian Orthodox Church has immense social and political influence in Georgia, where 83.4 percent of the population are members. Repressed under Soviet rule, the church has received extensive financial support in the form of public funds and property restitution, which a 2016 report by local NGOs revealed was worth several tens of millions of Lari (these financial privileges have since been challenged by the country's constitutional court).

It commands widespread respect in Georgian society — a study by the National Democratic Institute (NDI) and CRRC-Georgia published this January found that in November-December 2019, 50 percent of the population trusted the church implicitly. However, this indicator has been steadily dropping for several years — this figure stood at 64 precent in July 2019, and was even higher in previous years.

This means that the church's actions during the pandemic are particularly worthy of scrutiny. Now, some observers are wondering whether those actions will harm the church's popularity even further.

Georgie officially recorded its first COVID-19 case on February 26. The first reaction from the Georgian Orthodox Church came on March 17, when clergy sprinkled holy water along the central streets of Tbilisi, the Georgian capital. Archbishop Shalva Kekelia explained the act as a way of asking the Lord for help in protecting the country and the people from the virus. Three days later, the Patriarchate issued a statement calling on parishioners with health problems to stay away from others until they had completely recovered, and suggested performing church services in the open air to avoid large crowds gathering in small spaces.

As the number of COVID-19 cases grew, Georgia declared a state of emergency on March 21 which banned any gatherings of more than 10 people. When asked by reporters from On.Ge whether the ban also applied to church services, Prime Minister Georgi Gakharia responded that it “applies to everything and everyone.” Public discussion ensued about the safety of attending church services, leading the patriarchate to issue an announcement on March 25 reaffirming that while church services would continue, it supported the state's crisis control measures. The statement noted that some media had described the situation in such a way as to suggest that the church could be blamed for the consequences of the virus's spread.

The authorities’ attempts to find a common language with the church and the faithful came to a head in early April, when Easter Sunday and Palm Sunday approached. Gakharia said that he would be watching the easter service on television from home, while Minister of Healthcare Ekaterina Tikaradze added that people should pray from home, as “God is everywhere,” not just in church.

Nevertheless, the Georgian Orthodox clergy was unwavering and said that church services would continue. However, they stressed that they had enforced social distancing guidelines within churches, urged parishioners to listen to sermons outside over loudspeakers, and ordered that places of worship be disinfected. The church was less flexible on other rituals: for example, the use of a shared spoon to serve communion wine at church services. “It is completely unacceptable for members of the church to doubt the mystery of the sacrament and to demonstrate that with their actions, such as refusing to share a common spoon as a source of infection,” read a church statement after a March 20 synod meeting.

When reacting to the synod's decision Giga Bokeria, an opposition politician from the European Georgia Party, suggested that the church should not have expected special treatment and that restrictions had to apply to all institutions and citizens equally.

Therefore, part of Georgian society still looked towards easter with unease. On March 7, the Georgian theologian and former priest Basil Kobakhidze gave an interview to Pirveli TV in which he attacked the patriarchate for “fanaticism” over its approach to COVID-19. Kobakhidze, who lives in France, argued that the church has become a “state within a state” and could contribute to the spread of the disease. At the same time, he stressed, the country's political elite and high-ranking members of the clergy were not in any danger as they would not face problems getting medical treatment.

And although the government declared a lockdown of Georgia's four largest cities (Tbilisi, Kutaisi, Batumi, and Rustavi) on April 15, preparations for a large easter vigil continued. Tikaradze remarked very delicately that all members of Georgian society, including the church and individuals, had to share responsibility with the government in order to beat the virus.

Father Shalva Kekelia, priest at the Church of the Transfiguration in the Tbilisi district of Vake, said that he intended to set up a temporary structure for worshippers that evening — although social distancing measures would be respected within, it was supposed to accommodate 2,000 people. It would allow worshippers to remain on the church's premises overnight, thereby avoiding curfew violations. Similarly, Metropolitan Iakob of Bodbe, one of the church's most influential clerics, stressed in an interview with InterPressNews that the church had not ordered anybody to attend services and that “Christians must be responsible for themselves.”

On April 17, Kobakhidze declared in another interview that the patriarchate's commitment to holding large services amounted to a serious threat to public health. But it was not just prominent critics of the church who appeared to support his words. The same day, 13 clergymen signed an open letter stating that they temporarily refused to participate in the liturgy:

True communion with Christ is not just about attending church. We can create a true temple of Christ in other ways, as partakers of His holy body. Those who today refrain from gathering in prayer due to the epidemic are not betraying Christ; on the contrary, they are trying their best to perform the spiritual liturgy with their neighbour in mind, given the current situation. Fear does not always mean cowardice; sometimes it can be the basis for great acts.

Yet in the run-up to easter and Good Friday, the Georgian Orthodox clergy appeared to pick and choose which restrictions to obey. Under Georgia's lockdown, the movement of vehicles was prohibited from 12 o'clock in the afternoon. Nevertheless, on April 17 the patriarchate stated that the ban had not been agreed in advance with the patriarchate, and that the clergy, members of church choirs, and ushers would be free to move around by car to attend services.

So the easter liturgy was held with a smaller number of worshippers than in previous years; many of those attending were relatives of the clergy.

Hundreds of parishioners across the country attended the services on April 18, despite the authorities’ calls to stay at home. In Tbilisi's Sameba Cathedral, Reuters reports, all were wearing face masks and generally respected social distancing. The virus had struck fear into many people, said Patriarch Ilia II in his easter speech, which had turned their minds to God. “We should not be afraid of temptation, the Christian takes problems with gratitude and sees God’s hand in everything … and at the same time tries to find the right solution in the current situation,” continued the head of the Georgian Orthodox Church.

Although there have been some cases of clerics testing positive for COVID-19, such as one employee at a church in Tskneti outside the Georgian capital, it is hard to say whether public prayers were ultimately responsible. Tikaradze, Georgia's Minister of Healthcare, stated on May 5 that the authorities had not yet identified any “church cluster” of COVID-19 cases.

Whether worshippers were infected or not may be beside the point. For some in Georgia, the church's reaction to the state's COVID-19 restrictions has revealed how the clergy regard their relationship to the state — and wonder if the lessons of the pandemic might provoke a crisis of faith in the Georgian Orthodox Church's role in society.