In Brazil, COVID-19 death rate for black community is higher than for other populations

The results of an analysis by Agência Pública 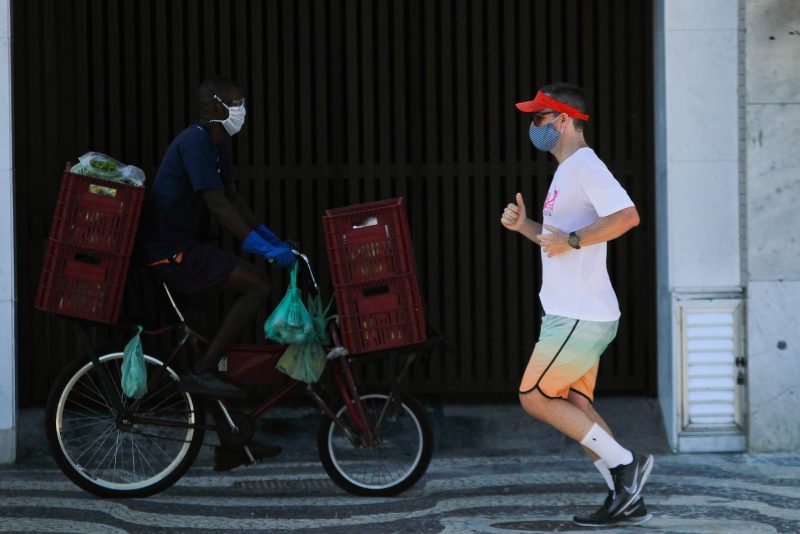 Photo by Pedro Conforte in Plantão Enfoco, used with permission.

This article was first published in Portuguese on May 6, 2020, and translated into Spanish by our Brazilian partner Agência Publica. It was then republished and edited by Global Voices with their permission.

For the white Brazilian population, the rise in deaths during these same two weeks was significantly smaller: deaths increased three times and the number of hospitalizations increased by a similar proportion.

By 18 June, the total number of deaths from the coronavirus in Brazil had risen to 46,842. Since the beginning of the pandemic, President Jair Bolsonaro has minimized the seriousness of COVID-19 and argued for keeping the economy open. Quarantine rules have been decided by regional governors. Today the country has the second-highest number of cases in the world.

The large increase in the number of black people who have been hospitalized or have died due to COVID-19 has highlighted issues of racial inequality in Brazil. Among the black population, one in three patients has died from complications due to the virus compared to one in 4.4 deaths among white Brazilian patients. 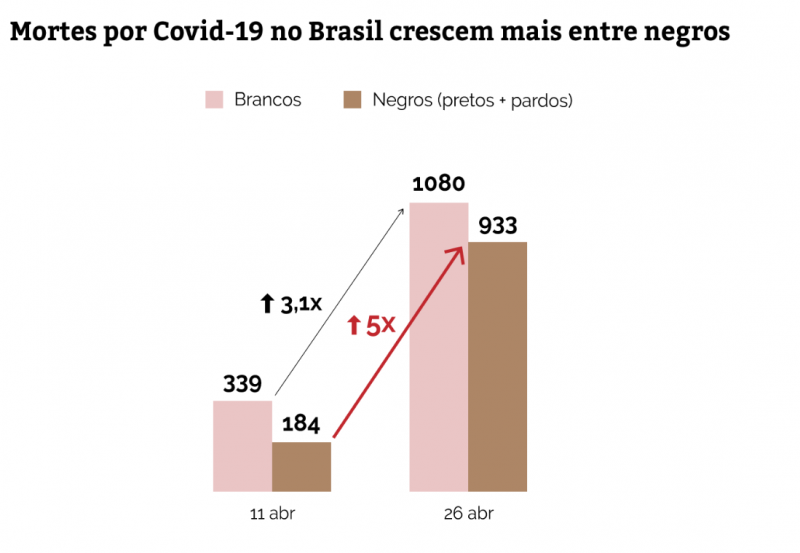 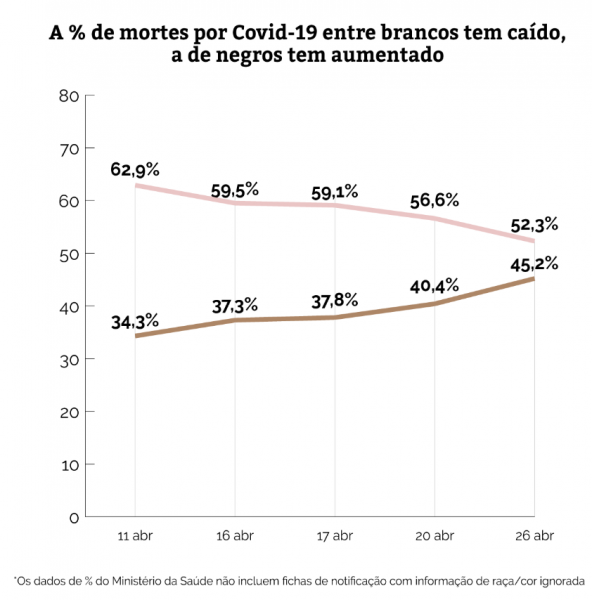 The percentage of deaths among white people has decreased, while among black people it has increased. Graph used with permission. 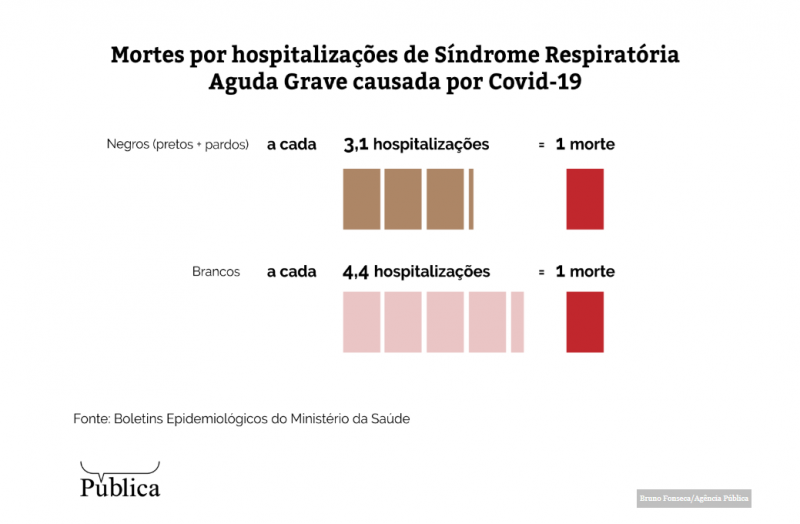 These data have been taken from an analysis carried out by Agência Pública based on epidemiological reports from the Ministry of Health which contain information on race in hospitalisations and deaths from coronavirus. The federal government published these updated figures on 26 April. 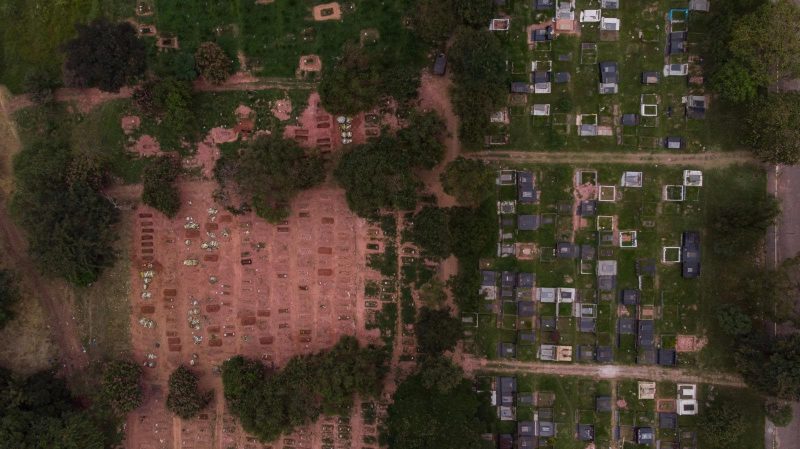 Graves are opened in the Vila Nova Cachoeirinha cemetery, which serves the community of Brasilândia, a neighbourhood in São Paulo where black people comprise half of the population and have the highest number of deaths from COVID-19. Used with permission.

For every death in Moema, four die in Brasilândia

São Paulo, the country's biggest city and the one with the highest number of deaths from COVID-19, has registered increased death rates in neighbourhoods where the black population is larger. According to Agência Pública, of the ten neighbourhoods with the highest death rate from coronavirus, eight have a larger percentage of black residents than the São Paulo average.

When adjusting the figures proportionally, the two neighbourhoods still have different realities: compared to the number of residents in Moema, Brasilândia has approximately 25 percent more deaths. Agência Pública used data from the last census (2010) to analize the population size and residents’ race. 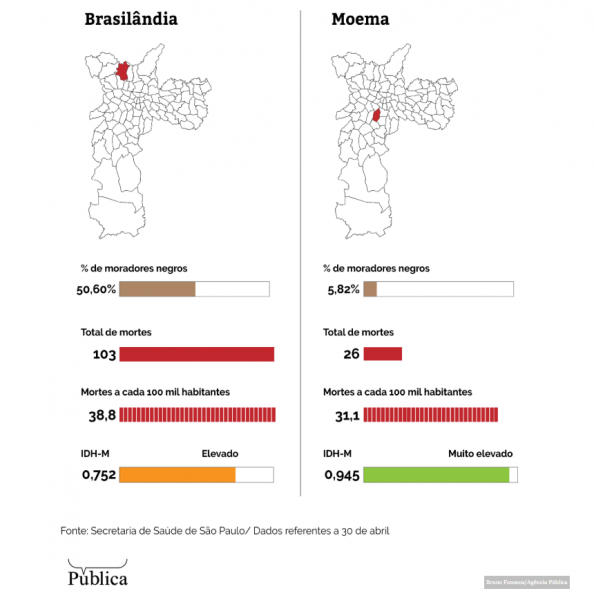 COVID-19 data for black residents in Brasilândia and Moema. Graph used with permission.

In Jardim Ângela, the neighbourhood with the highest percentage of black people in the whole city, deaths from coronavirus almost tripled in about two weeks. In other neighbourhoods with a majority black population, such as Grajaú, Parelheiros, Itaim Paulista, Jardim Helena, Capão Redondo and Pedreira, deaths from COVID-19 more than doubled during the same period.

In Rio, neighbourhoods where more black people live than the city average already have more deaths 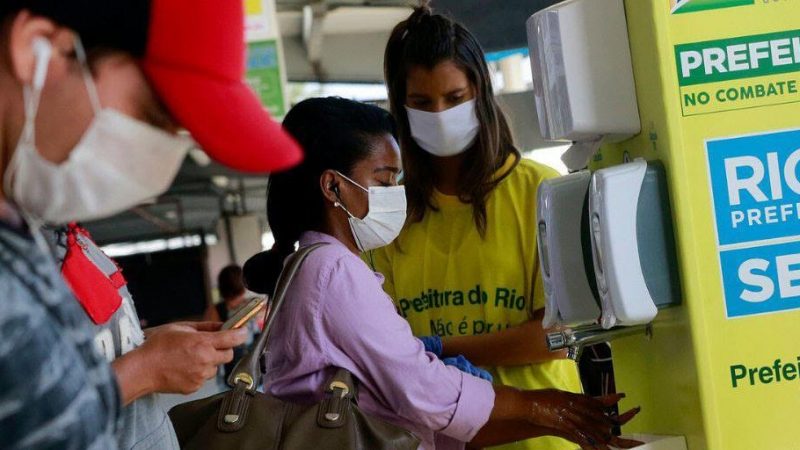 In Rio, increasing cases of COVID-19 in neighbourhoods where there are more black residents than the city average have led to these areas recording more and more deaths. Used with permission.

Currently, Campo Grande, which has more than 50% black inhabitants, is the neighbourhood with the most deaths. The neighbourhood overtook Copacabana, which previously had the highest number of deaths from COVID-19. After Copacabana, Bangu and Realengo, two neighbourhoods with a majority black population are the third and fourth most affected in the city. 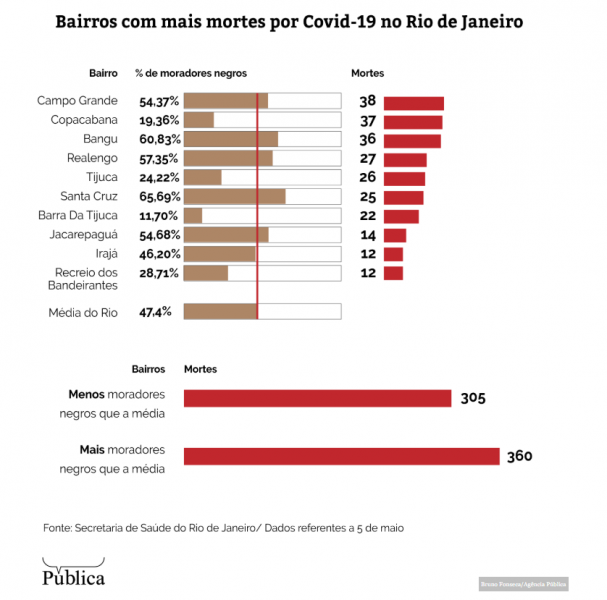 Neighbourhoods with most COVID-19 deaths in Rio de Janeiro. Graph used with permission.

In Rocinha, the city's largest poor neighbourhood, there were nine deaths according to official data at the time of the investigation. Doctors working in that community questioned the number and pointed out that there were already 22 deaths in the favela.

The relationship between the number of confirmed cases and deaths is also quite different between the rich and poor neighbourhoods of Rio de Janeiro, which may indicate difficulties to get tested for residents of favelas and suburbs.

In Amazonas state, where the public health system has collapsed, black people are dying in higher numbers than white people who are severely affected COVID-19 patients. According to Agência Pública, one black person dies for every 2.4 patients in serious condition, while among white people there is one death for every 3.2 seriously ill patients. 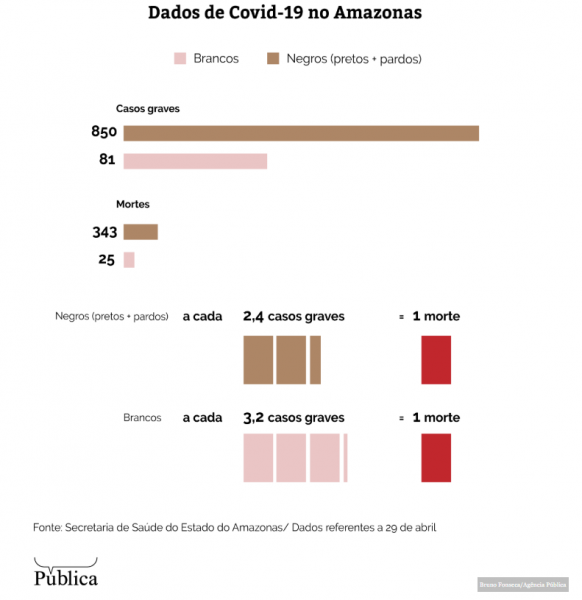 The state of Amazonas, which was the first to reach its maximum capacity of intensive care units for patients with COVID-19, has recorded a more significant increase among black people severely affected by COVID-19 than among white people. At the end of April, the number of seriously ill black patients doubled.

In Amazonas,13 black people died for every white person who died. The health department had registered about 850 black patients with severe coronavirus infections and over 340 deaths. Among white people, there were 81 serious cases and 25 deaths. The data on race was updated on 29 April. 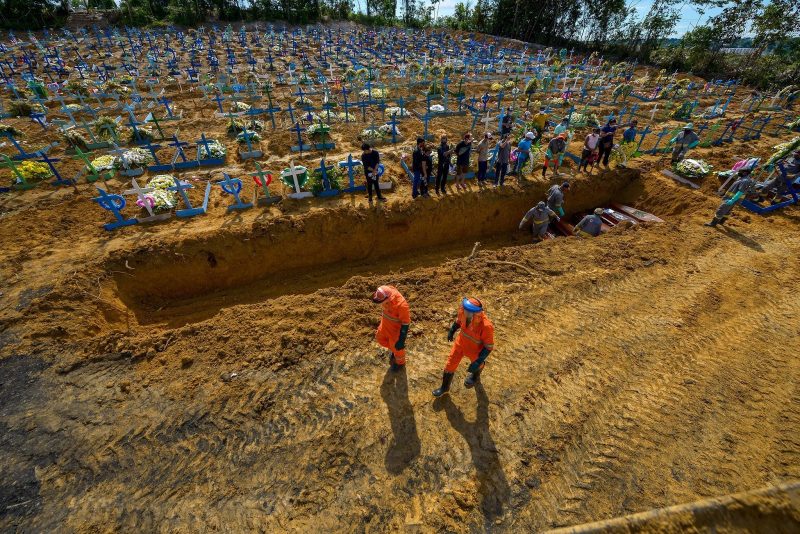 In Manaus, the first Brazilian city to have its public health system collapse, more than 13 black patients died per one death of a white patient. Used with permission.

Despite data that shows a greater increase in deaths in the black population and more deaths among hospitalized patients, the Federal Government does not release details about this information. For example, there is no information available about how many cases were confirmed by race, nor the number of tests done on black people, white people, and other populations.

The lack of official data on race has a long history in the country, says lawyer Daniel Teixeira, director of the Centre for the Study of Labour Relations and Inequalities (Ceert). According to Teixeira:

There are several factors that may explain the high lethality [of COVID-19 among the black population]. Indeed, having more information means that we can even confirm or exclude the importance or relevance of each of these factors, as the case may be. That's where the importance of the data lies.

Teixeira believes that the gap is not only in the area of health and that it is widespread in the country.

The lack of this type of data could prevent people from having public policies that take into account this situation which, historically, ignores the factors of structural inequalities in Brazil.

The Report was originally published by Agência Pública.