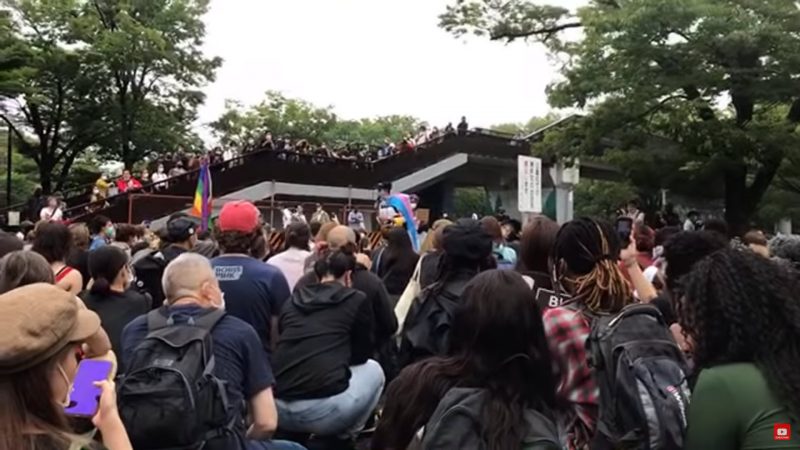 Black Lives Matter rallies and marches were held in cities across Japan throughout June, as part of a global display of solidarity with demonstrators in the United States and other countries. They also highlighted the importance of Black lives in Japan, and the problem of police brutality in the country.

As in the United States, Japan's Black Lives Matter marches were preceded by an incident of police brutality that happened to be recorded on video. On May 30, several days after Americans began protesting the killing of George Floyd, video emerged of police in Shibuya, Tokyo, assaulting a Kurdish man.

The video was shared thousands of times as part of a social media campaign on Twitter and other social media platforms, and on May 30, 200 people attended a protest in front of the local police station.

While not directly related, the Shibuya protest kicked off a month of nationwide demonstrations opposing police brutality and voicing support for Black lives. These included a nighttime march in Tokyo on June 5; a Black Lives Matter protest organized by high school students in Nagoya, in central Japan; and a well-attended demonstration in Kyoto.

As the momentum continued to grow, a march in Osaka on June 7 attracted ten times as many attendees than had been expected:

Anti-Black racism is a problem

While Japan has long been home to many Black residents, anti-Black racism is not unusual. The use of blackface tropes in the media and in Japanese advertising is still so common that in early June, a major television network invited well-known American white supremacist, Jared Taylor, to provide “context” about the Black Lives Matter movement.

One example of the deep-rooted anti-Black racism displayed by the Japanese media is an “explainer” of the Black Lives Matter movement that national public broadcaster NHK aired in June. NHK was later forced to apologize for the animation, which portrayed Black Americans as violent looters:

This TV program seeks to educate and update viewers on a range of issues and is quite a good show. Most of the material is appropriate and fair but not sure this video is ok. #アメリカ #抗議デモ #世界のいま #アニメ #BlackLivesMatter ?? pic.twitter.com/4WpflexivO

As Krissy, a game designer, attested in a widely shared tweet, the danger of such racist coverage is that it has the power to misinform and influence:

My job in Japan is scared I might start breaking stuff or looting because I’m a black American. The faq ? Thanks NHK

Prominent biracial and mixed-heritage Japanese personalities have also been on the receiving end of abuse. Ariana Miyamoto, who was crowned Miss Universe Japan in 2015, endured criticism for “not being Japanese enough“.

Tennis star Naomi Osaka, who is Black and Japanese, has long been outspoken about racism in Japan, and recently said she is “in no mood to back down on support for Black Lives Matter”.

Meanwhile, Jay Jackson, a Black American pitcher in Japanese professional baseball, thought the simplest way to foster understanding is to have conversations:

How about they just ask black people from America to explain to them instead….??? There are quite a few that live or work in Japan now.

Explaining the significance of Black Lives Matter and the ongoing crisis of police brutality in an essay for prominent business magazine Toyo Keizai, commentator, activist and longtime resident of Japan, Baye McNeil, suggested:

One might say, if the media here really cared, if black lives really mattered in Japan, they would. The fact that the media has been soliciting white thought exclusively leaves me feeling that perhaps they merely want to appear to be trying to understand what’s going on as opposed to wanting to know and report the truth.

Not all Japanese media got it wrong, however: Toku, Da Ne, a weekday morning television talk show that is popular with retirees, received praise for its fledgling attempts to explain the issue of Black Lives Matter, and brands like Sanrio, the creator of Hello Kitty and other cute, kitschy characters, voiced support for Black lives:

Friends are always there for one another. Here are some tips on how to be a better friend and ally ? pic.twitter.com/WtXoq33db7

The Black Lives Matter movement appears to be just getting started in Japan, with demonstrations scheduled to continue throughout the summer, including a march on July 5 in Nagoya.

Note: The exerpt from Baye McNeil's Toyo Keizai article has been updated with the original English.