From prison to exile: An interview with Vietnamese activist Tran Thi Nga

They broke her bones in one attack, but never her spirit 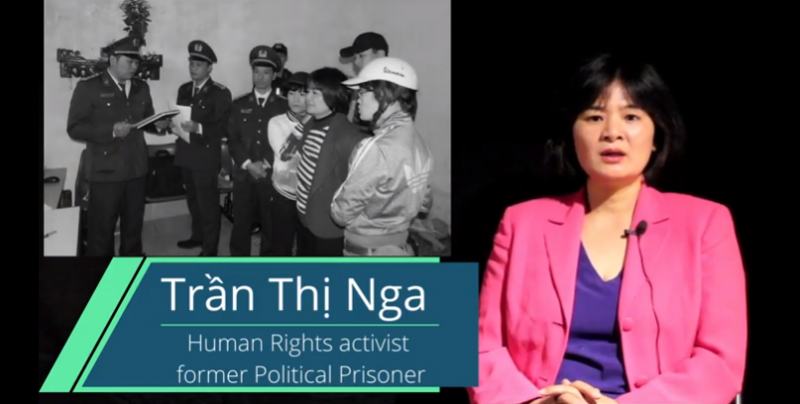 Former political prisoner Tran Thi Nga talks about the effects of prison on women and children. Source: Screenshot from YouTube video uploaded by The 88 Project

The 88 Project had the opportunity to interview former political prisoner Tran Thi Nga about her experience in prison and conditions in prison for women and children.

Tran Thi Nga was released from prison in January and was immediately sent into exile in the United States. She was about three years into a nine-year prison sentence for her activism on land and labor rights when she was released.

In the video, Nga speaks about the psychological effects of her arrest and time in prison on her young children. Her youngest child was only four-years-old when he witnessed his mother being detained by the police in their own home. When Nga’s husband was taken in for questioning, their six-year-old was also detained and was even separated from his father. Nga’s children struggled with discrimination at school during her imprisonment, as well as difficulties in visiting their mother in prison. Nga was transferred to a facility 1,000 km away from the family’s hometown, and the authorities often used visitation rights as a means to try to get her to admit guilt.

She urges international stakeholders to speak up for the rights of women and children and remedy the injustices caused by the Vietnamese authorities’ poor treatment of female prisoners.

Tran Thi Nga is the fourth political prisoner in the past few years who was released early but had to go into exile in exchange for their freedom, following Nguyen Van Dai (June 2018), Le Thu Ha (June 2018) and Nguyen Ngoc Nhu Quynh (October 2018).

Tran Thi Nga worked as migrant laborer in Taiwan, where she experienced many injustices. When she returned to Vietnam, Nga became an advocate for migrant laborer rights, as well as a supporter of multi-party democracy and women’s rights. She also became involved in land rights activism to protest land grabs by authorities in her community.

She was beaten at least twice for her activism, once by pro-government thugs in May 2014, who broke her arm and leg, and once by police, who dragged her from a bus in August 2015.

Nga was arrested at her home in Ha Nam on January 21, 2017 for her online videos and writings deemed as “propaganda against the state.”

She was held in incommunicado pre-trial detention in Ha Nam until her trial in July 2017. Her trial was only one day, and her family and supporters were prohibited from entering the courtroom. She was sentenced to nine years in prison and five years of house arrest.

The 88 Project team is happy that Tran Thi Nga is now free and reunited with her husband and young children.

However, we would like to note that Nga’s early release should not be seen as a sign of improvement in the human rights situation in Vietnam. Early releases in the past few years have been scarce, and political prisoners who were released early all had to leave the country. Those refusing to leave have to remain in prison and potentially face further harassment.