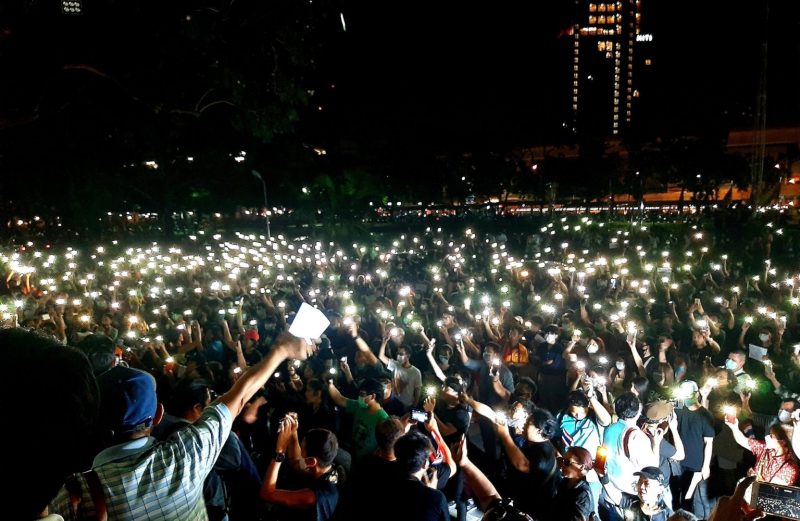 Students alight their mobile phones during a protest at Kasetsart University on February 29, 2020. Photo by Chonthicha Jangrew. Source: EngageMedia / Coconet

This article by Chonthicha Jangrew is from Coconet, a platform for digital rights movement-building in the Asia-Pacific hosted by EngageMedia, a non-profit media, technology and culture organization. This story was edited and republished on Global Voices as part of a content-sharing agreement.

Hope for political change in Thailand has grown stronger in 2020 after a wave of student protests across the country followed the constitutional court’s dissolution of the opposition Future Forward Party.

This decision sparked flash mobs against Thai Prime Minister Prayut Chan-o-cha and his authoritarian regime, which has been in power since 2014. From February 21 to March 14 there were at least 79 flash mobs in universities, according to the Thai Lawyers for Human Rights group.

This wave of protests, dubbed the “youthquake” phenomenon, is reflective of growing political awareness among Thai youth.

With young people on their side, pro-democracy groups saw potential for ousting the pro-military government.

But Thai authorities have also been upping surveillance of online activities.

The government even has an Anti-Fake News Center that has been dubbed the “Fake News Center” by critics who have accused it of focusing on restricting rights to freedom of expression, rather than dealing with disinformation.

The center is known to censor information and criticism regarding the government’s management of the pandemic. It has even pressed charges against citizens for stating obvious truths.

Danai Ussama, an artist from Phuket, was arrested by police under the Computer Crimes Act after he posted on an online platform that there was no COVID-19 screening at the Suvarnabhumi airport, where he arrived following a stay in Spain in March 2020.

But harsh measures have failed to stifle dissent.

In fact, the June 4 disappearance of political exile Wanchalerm Satsaksit in Cambodia reignited protests against the pro-military government, with more than 400,000 retweets using the hashtag #SaveWanchalearm the following day.

Amid restrictions, Twitter has become the main space for freedom of expression in Thailand. One of the viral hashtags during COVID-19 has been #nnevy, which emerged when Thai Twitter users sparked a war against Chinese nationalist trolls and created “a new pan-Asian solidarity”.

This happened after Chinese fans of Thai actor Vachirawit Chivaaree retweeted a tweet that called Hong Kong a “country.”

Thai Twitter users retaliated against the online attacks against Chivaaree, which appeared to be led by pro-Beijing trolls.

Soon after, Twitter users from Hong Kong and Taiwan joined the defence, which led to popular hashtags #MilkTeaAlliance and a Thai equivalent that translates to #MilkTeaIsThickerThanBlood.

Joshua Wong, the Hong Kong pro-democracy activist, posted a photo of the actor with a message that Hong Kong was standing with Thais who loved liberty and standing against persecution by China.

He even called for the building of an Asian alliance against dictatorship.

The Student Union of Thailand then came up with an online campaign to “protest from home” by sharing photos or placards commenting on government performance with the hashtag #MobFromHome. This hashtag topped Twitter trends in Thailand.

Apart from using hashtags, pro-democracy activists online have also adopted a strategy called “bombardment”, or “ทัวร์ลง”, in which a user asks other users to collectively criticize a problematic post.

In Thailand, this kind of online public mobilization has been used to counter the government’s information operation (IO) campaigns that involve online attacks targeting dissidents and critics.

While Twitter has been the platform of choice for anti-youth activists, two events that happened in close succession led to a drop of general confidence in the platform.

Following these updates, #NoTwitterThailand topped the country’s trending page as Thais saw this as part of the government’s programme of surveillance and restriction of free expression online.

Even more users began to doubt the security and privacy of the platform after Buddhipongse Punnakanta, the Minister of Digital Economy and Society, tweeted about his recent discussion with Twitter's senior director of public policy & philanthropy for Asia-Pacific, who is based in Singapore.

This new distrust of Twitter poses questions for the future and efficacy of online activism.

Will enough Thai users flock to these social media alternatives to reach a critical mass, and therefore enact concrete social changes? How do we continue to talk about diverse issues in online social movements? And how do we transform awareness into the change we dream to see?

There are no easy answers to these questions. But in the case of Thailand, we continue to witness a “youthquake” and increased political awareness among Thai students.

We also continue to witness how open spaces online have led to a more critical discourse regarding the government.

Authorities’ manipulation  of the information space has simply accelerated this process.

*Chonthicha Jangrew (Lookkate) is a co-founder of the Democracy Restoration Group (DRG), a Thai pro-democracy and human rights activist. She has been advocating for freedom of expression and freedom of public assembly in Thailand since the 2014 coup.