People with disabilities left stranded during national lockdown in Uganda

During curfew, people with disabilities were harassed, shot and trapped 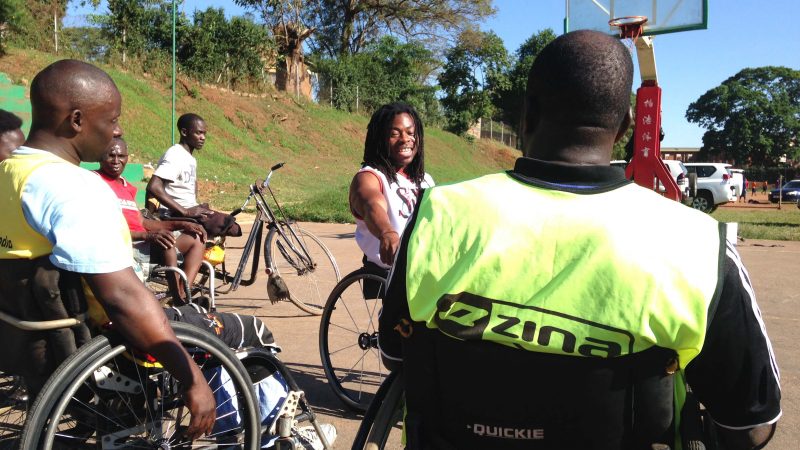 Ugandan national wheelchair team practices on the court on October 24, 2013, Uganda. Photo via DfID on Flickr CC BY 2.0.

Nearly a month after Uganda enforced a national lockdown and curfew, 25-year-old Willy Oloya, who is deaf and blind, was shot by a team of Local Defence Units in Agago District, in the northern region.

On April 30, during a strict curfew due to the coronavirus, the LDU officers tried to speak to Oloya as he was walking. But Oloya could not see or hear them and continued walking when the officers shot him in the leg. Oloya had to amputate his leg and now endures the burden of another layer of disability that could have been prevented.

But Willy Oloya who has hearing and speech impairments did not. The 25-year-old resident of Mugila West Village in Agago District, was shot 5 times in the leg, by LDU personnel enforcing the 7pm to 6.30am curfew. https://t.co/4NtjWnndLz pic.twitter.com/8umM4H00Xy

It took substantial advocacy and lobbying around the shooting of Oloya to have adequate PWD representation on the government’s national COVID-19 taskforce through its risk communication committee.

The needs of marginalized people, especially those of persons with disabilities were conspicuously absent in President Yoweri Museveni’s COVID-19 directives.

Betty Achana, who works for the National Union of Women with Disabilities of Uganda, told Global Voices:

One of our first interventions was for me to engage with our line ministry and to say that these directives are not inclusive of the special needs of persons with disabilities. We instantly began to get news of how the directives were impacting them [PWDs] negatively. They had no information on what COVID is, how it is spread, who is COVID affecting, what the directives are about. People did not know about curfew. That is how the boy in the north gets shot. That is how the girl in the north gets beaten by LDUs.

Achana and her colleagues’ advocacy paid off.

She joined the task force at its ninth meeting and promptly began a project to translate pandemic-related information into sign language. Sign language interpretation was incorporated into all official televised addresses on COVID-19.

While commendable, this progress was a little too late for some PWDs. 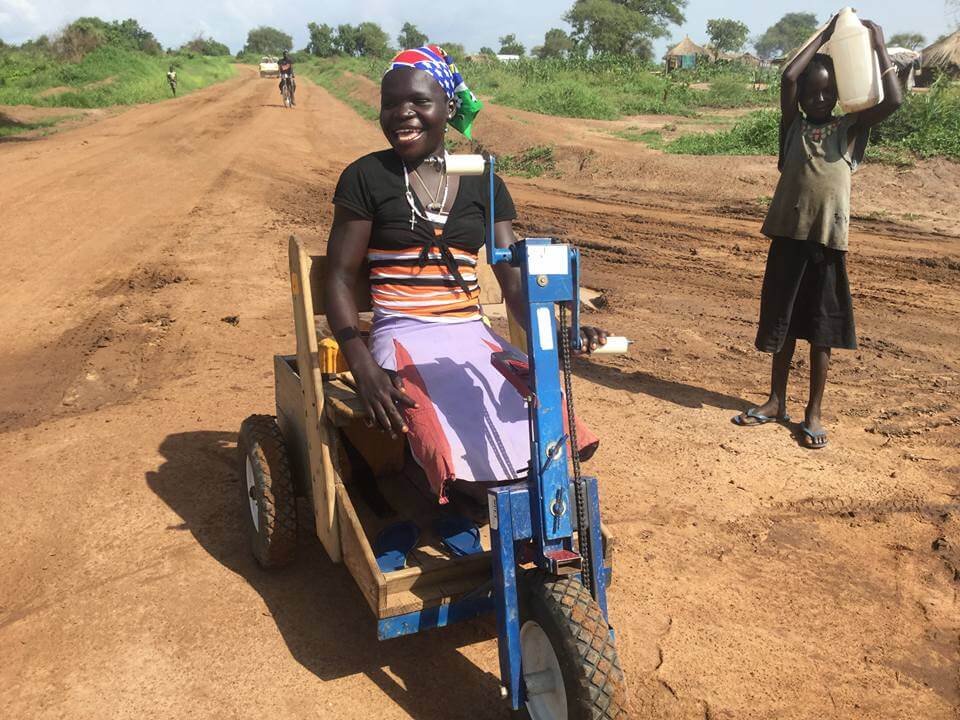 Annette Okuvuru travels around in a wooden wheelchair in Arua District, Uganda, via COMBRID-Friends of Disability Facebook page, used with permission.

The ban on private and public transportation was essential to prevent the spread of COVID-19, but the decision was not inclusive of PWDs, excluding those with desperate needs for health care or food supplies.

While non-disabled people could easily walk to buy groceries, many people with disabilities made the difficult decision to drive a car or ride on a boda-boda or motorcycle taxi, out of necessity, at great risk to their personal safety.

Muzamil Ali, a visually impaired teacher and nongovernmental worker in the northwestern district of Arua, was harassed by soldiers for allegedly flouting social distancing measures while walking with his personal assistant.

Lydia Abenaitwe, a woman with a physical disability in Kampala, the capital, was arrested and detained twice while driving to buy groceries. She told Global Voices:

The first time I was held at a roadblock for about 30 minutes. The second time, I was taken to Kabalagala police station. The District Police Commander expressed his remorse for how I was treated and after about an hour, I was escorted to buy my groceries.

The struggles of some PWDs exist at the intersection of class, gender, HIV/AIDS status and multiple disabilities or other power differentials, increasing their vulnerabilities.

By the time the lockdown came, we were stopped from using private transport. One time we accessed the District Health Officer [in] Wakiso District to get clearance. But these guys [police] by the roadside confiscated our car key for hours and we missed the surgery because the doctor was on appointment. We had to make another appointment and it had to be at night. And curfew hours start at 7 [p.m.], [so] we had to incur more costs to be residential [at a private clinic] which we had not budgeted for. 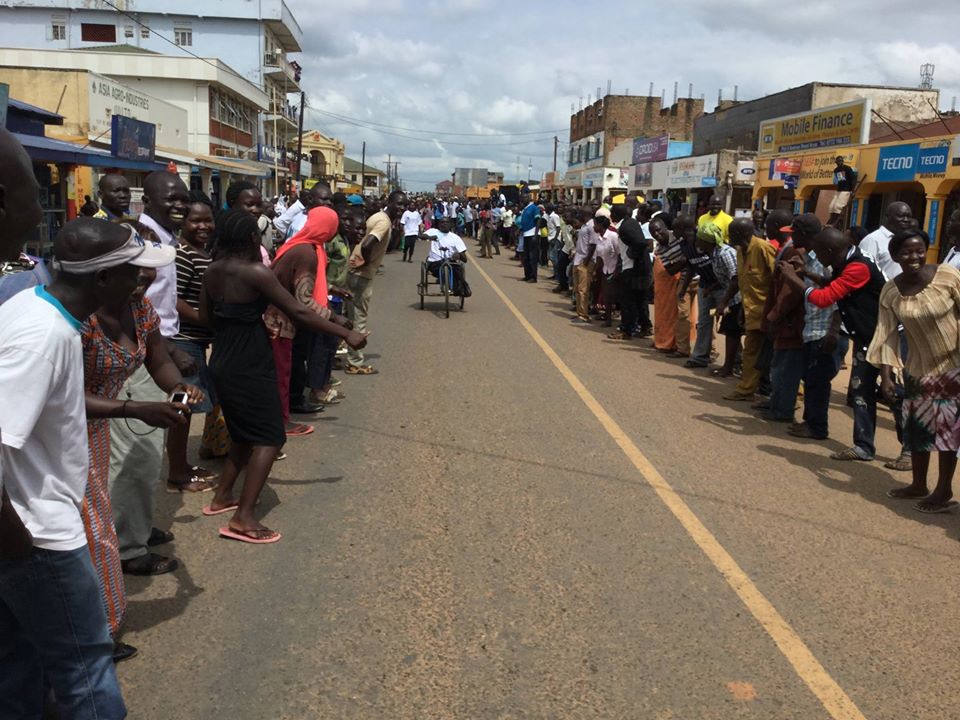 Disability Awareness race in Arua District, organized by COMBRID-Friends of Disability in Arua, Uganda. Photo via Facebook, used with permission.

Uganda has a rich legal and policy framework governing disability rights. In 2008, the country ratified the United Nations Convention on the Rights of People with Disabilities. Several state obligations come with this ratification: The government is tasked to ensure personal mobility with the greatest independence for PWDs; accessibility to transport; and inclusion in political decisionmaking.

The glaring disparity between the well-intentioned laws and policies and their implementation is partly a result of budgetary constraints.

In the national budget passed in 2020-2021, the social development sector under which PWD fall was allocated just 0.38 percent, whereas the top three priority sectors — works and transport, security and debt interest financing — respectively represent approximately 13 percent, 10 percent and 9 percent of the entire budget.

This allocation reflects the government's low level of interest in citizens’ social protection.

Patrick Pariyo, director of COMBRID-Friends of Disability, a community-based organization in northwestern Uganda, told Global Voices that the government’s underfunding of disability rights is rooted in commercial interests, individualism and a culture of quid pro quo that pervades every sector of Ugandan society.

Pariyo explained how the coronavirus measures interrupted his organization's community-based approach to disability rights. Before social distancing was enforced, they used to directly engage community educators and leaders to assess needs and help PWD acquire equipment and support.

Now, with social distancing, we were not able to reach people. COVID [-19] has blocked resources. We have over 1,500 epileptic patients in 16 health centers to whom we would provide anti-seizure drugs.  Everyone is talking about COVID [-19].

COMBRID’s plight is inevitable as donor countries begin to shift their funding focus to fighting COVID-19 at home. The government received generous donations from individuals and businesses to assist, but disability rights organizations still struggle to get citizens to care.

Ali, the visually impaired teacher, said: “If we cannot have representatives who are more vocal as far as PDWs are concerned, then the same issues will continue manifesting themselves.”

Abenaitwe agrees: “You cannot expect people who do not understand what another category of people goes through to represent them well.”

Achana says that mapping disability needs and creating awareness is the key to policy change, adding that police and military officials lack awareness of PWD issues.

Uganda partially lifted its lockdown in early June, but PWD stigma and prejudice continues. The fight for inclusion ties into broader social protection issues in Uganda, such as unfair labor conditions and youth unemployment.