In the wake of Black Lives Matter's protests, death of black 5-year-old becomes symbol of Brazil's racism and inequality 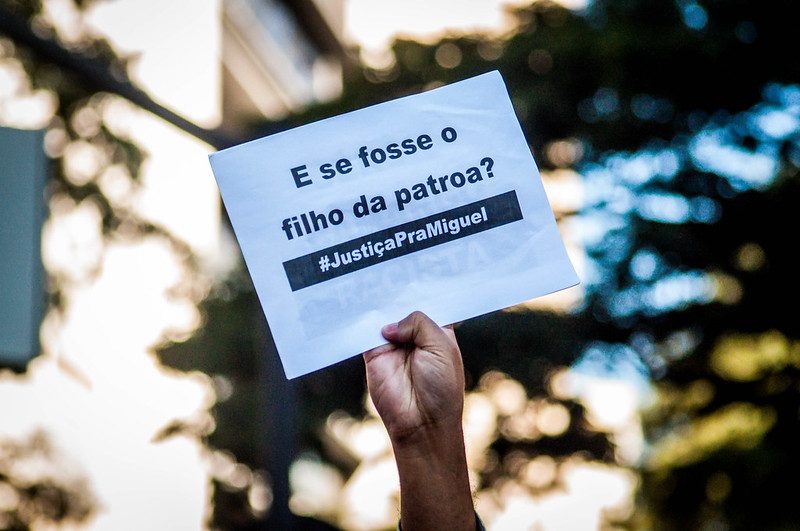 A protester holds a sign saying ‘what if it was the employer’ son? Justice for Miguel. Image: Mídia NINJA/CC BY-NC 2.0

On June 2, Mirtes de Souza, a domestic worker at an upper-class family home in the northeastern Brazilian city of Recife, brought her 5-year-old son Miguel to her workplace. While nurseries and schools have been shut in Recife since the beginning of the COVID-19 pandemic, Mirtes wasn't granted time off by her employers.T

That day, Mirtes asked her white boss to mind Miguel while she went out to walk the house dog. When she came back, she found her son on the ground floor of the building after an apparent fall. Miguel was taken to the hospital alive, but didn't survive.

CCTV images obtained by the police later showed Mirtes’ boss, Sari Côrte Real, placing Miguel into an elevator by himself, and pressing the button to one of the top floors of the building. Images then show Miguel leaving the elevator on the ninth floor where, authorities later deduced, he climbed an unprotected gallery with air-conditioners, and fell.

Côrte Real was arrested and charged with manslaughter but released after paying a 20,000 BRL bail (around 4,000 US dollars). Police says it's investigating the possibility that Miguel was pushed from the ninth floor.

In the wake of George Floyd's protests in Brazil, the case sparked outrage on social media, with many considering Miguel's death yet another example of the racism Brazil's black citizens endure.

If it was me, my face would be on the front pages, as I’ve seen happening many times on TV. My name would be on the headlines and my face would be everywhere. But hers can’t be in the media, it can’t be made public. (…) I hope that justice is served, because if it was the other way around, I think I wouldn’t even have the right to post bail. A life is gone, because of a lack of patience. To leave a child on their own, in an elevator, you can’t do that. A child that was entrusted to her.

Miguel's story quickly became national news. Many have seen it as a symbol of the worst in Brazil, especially its systemic racism against black citizens.

Brazil forcibly brought around 5 million Africans to work as slaves in a period spanning 400 years — over ten times more than the United States. Brazil was also the last country in the Americas to abolish slavery (in 1888).

But Miguel's death was also a reminder of Brazil's rampant corruption and inequality, and how both have been exacerbated in the COVID-19 pandemic.

Mirtes had no choice but to keep working during the pandemic in order to provide for her family. She wasn't an exception: The first COVID-19 death registered in Rio de Janeiro, in March, was of a domestic worker who was also impeded to quarantine by her employer.

In an interview, Mirtes said that she, her mother, and her son Miguel all had tested positive for SARS-CoV-2 (COVID-19's virus), but their symptoms were mild.

Brazil registered over one million cases of the new coronavirus as of June 22, and over 50,000 deaths. It's second on both counts only to the United States.

Meanwhile, Mirtes’ employer Sari, a white woman living in one of the wealthiest areas of Recife, was a member of a traditional political family in the state of Pernambuco. Sari's husband, Sérgio Hacker, is the mayor of Tamandaré, a small town 100 km away from Recife to where Mirtes says she was frequently brought over by the family.

Following Miguel’s death, it was revealed that Mirtes had been hired as a public employee of Tamandaré. According to the registry, Mirtes had a management position in the city hall, earning 1,517 BRL — Brazil’s minimum wage is 1,045 BRL (282 and 194 US dollars respectively). Mirtes said she never worked for the city hall and denied knowing that she was officially hired as such. The case is under investigation.

WE WANT JUSTICE FOR MIGUEL!
In Recife, protesters make an intervention in front of the place where Miguel died, the luxury condo known as Twin Towers. 20,000 is the life of a poor black child and a mother's pain.

Miguel’s death sparked protests in the streets of Recife and on social media. The building where it happened made it even more symbolic to activists: its construction has been marred in controversy as it's located in a protected historical area.

On June 5, dozens of protesters, alongside Miguel’s family, marched towards the buildings, where Corte Real and her family lives. People laid down on the street to remember how the child died.

“I want my mother”, protesters today in Recife, in memory and asking for justice to little Miguel, age 5.

Miguel's death was also remembered in Brazil's protests against racism in the wake of the death of George Floyd in the United States and the Black Lives Matter movement.

Another case remembered at the protests was of João Pedro, a black 14-year-old killed by the police inside his own home in Rio de Janeiro on May 18.

A collective of daughters and sons of domestic workers, created in March to ask for social isolation rights for their parents, published a note reminding that what happened to Miguel could have happened to any of them:

What happened with Miguel, 5 years-old, opened wide the INEQUALITY, RACISM, CLASSISM. The denied right for isolation that are mothers are facing. How many of us died in the big house? How many will have to die in the buildings until something is done?