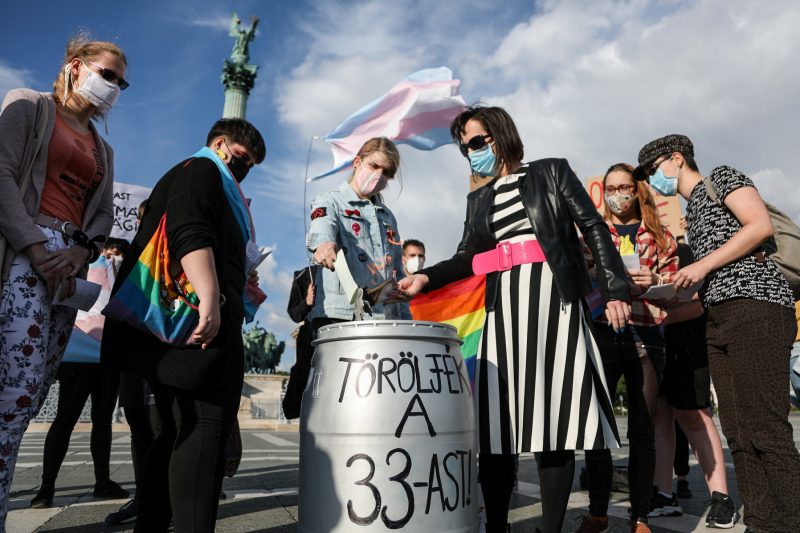 Being a transgender person in Hungary is about to become even harder, after the government passed a law that will demand all citizens write their “sex at birth” on their national IDs. And the response in this field cannot be changed.

“I have no hope of getting my gender recognised now,” said Ivett Ördög bitterly, sitting behind her home desk, which has now become her office, with her dark hair and eyes, a colourful floral shirt, and big earrings.

She is a software developer, a very successful one, but she has struggled a lot in the workplace. Why? Because she was biologically born as a man.

She told her story with half a smile and plenty of concern and desperation. Desperation over what is happening in her country.

Ivett is a transgender woman who said that her rights “are being violated by an European Union (EU) country.”

This is the law whose 33rd article forces all citizens to write “sex at birth” on their national IDs.

This result of the law is that no Hungarian citizen will be able to legally change their gender and those who have undergone a physical transformation are vulnerable to potential discrimination upon document-checking.

Document checks are fairly frequent in Hungary, where identification is required to pick up a parcel, pay with credit card and get on a bus.

“It could become dangerous,” said Ivett, explaining why she doesn’t use public transport or go to the doctor’s anymore.

She didn’t get her gender legally recognized, so anytime that someone checks her ID, they will see that she was a man, and this scares her.

Just  imagine […inaudible…] being pulled by policemen, and you show your ID and they don't believe you it's your ID. What do you do then? Policemen can get quite brutal at times, and then I can't even call the police! Because – they are already there. […] Especially in a country that is so homophobic, and, obviously also trans-phobic, it's not safe. Definitely not safe.

Hungary has shed 8.46 percentage points on the 2020 ILGA-Europe Rainbow Map — an online index that ranks all 49 European countries to see how laws and policies impact LBGTI people's lives. That was the most drastic drop in Europe. 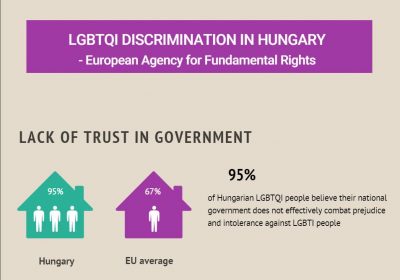 Click to see infographic about LGBTQI discrimination in Hungary.

Dorián Palai, a transgender man, explained that when someone checks their ID, they might be tolerating, but they might also start to make fun of them, “out” them or even attack them.

“Your whole life will depend on other people’s kindness,” Palai said .

Despite the fact that Palai secured recognition of his gender, he has still been discriminated against by medical professionals. Their rudeness, especially when he took his clothes off, left him utterly dejected.

When I left the medical center I started to cry, because it was not just frustrating — it was very frightening. And also very disheartening.

Hungary doesn’t have a law that regulates gender recognition and for the last 3 years nobody could get their gender legally changed.

Ivett told Global Voices that she has sent all the papers to have her gender recognised, but she was told the government was “reorganizing” legislation for gender recognition.

Little did she know that this reorganization was actually Article 33 of the Omnibus Bill.

One such person is Zsófia Szabó, who left Hungary because she was discriminated for being a transgender woman. She now lives in Sweden and manages the Prizma organisation to help the transgender community in Hungary.

She said the purpose of the Omnibus bill is to “throw transgender people to the trenches.”

But Zoltán Koskovics, an analyst for the Center for Fundamental Rights, a conservative research institute in Hungary, said in an interview with Global Voices that the legislative procedure was transparent and necessary to “fill a legal gap”, because the Hungarian law didn’t have a legal definition for “sex”, so it was creating uncertainty.

He noted that the Hungarian constitution doesn’t recognize the category of “transgender,” but protects every citizen from discrimination.

Palai disagrees with that take and said that he doesn’t feel like “a real citizen”.

Dunja Mijatović, the Commissioner for Human Rights of the Council of Europe tweeted that the new omnibus law is against the European Court of Human Rights’ jurisprudence.

I regret that parliament in #Hungary adopted today a law that makes it impossible for #transgender people to obtain legal gender recognition. This is contrary to @ECHR_CEDH jurisprudence & a blow to trans people's human dignity.

But a spokesperson for the EU Commission said in an interview with Global Voices that “the procedures for legal gender recognition are a matter of national competence and fall outside the scope of EU law.”

Ivett said that the EU has failed to enforce respect for human rights in countries like Hungary. She now wants the chance to leave the country and obtain citizenship somewhere else, in order to have her gender legally recognized.

The problem is that she would have to live in that new country for at least 10 years, without moving away, before she can get the citizenship.

“What the EU can do right now is to help transgender people to leave Hungary and get citizenship elsewhere really quickly,” she said.

In the meantime, Hungarian activists are trying to fight this law.

Áron Demeter, the program director of Amnesty Hungary, said Amnesty will ask the Hungarian Commissioner for Fundamental Rights to bring the law to the Constitutional Court, which is the only institution that could annul article 33.

“It’s the only hope we have,” Demeter told Global Voices via email.