"And there is nothing else / All is within us." 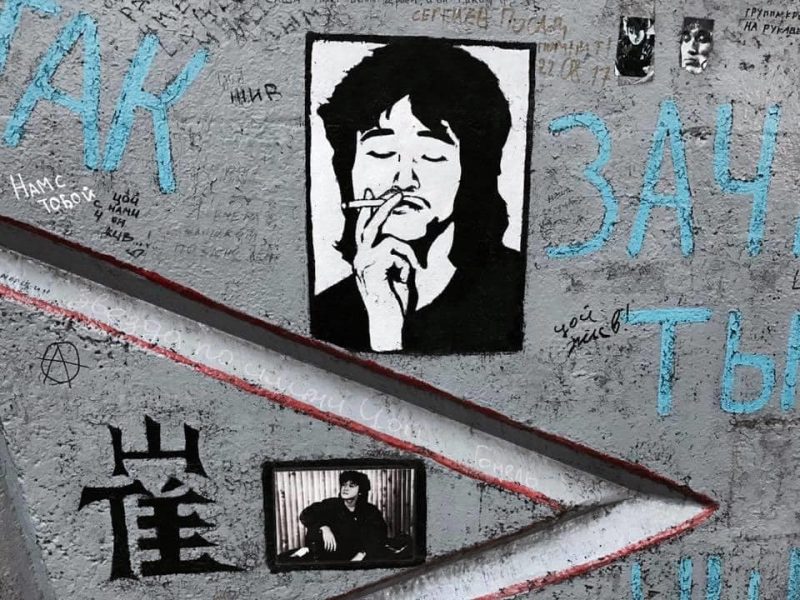 The Viktor Tsoi wall in central Minsk, where the Chinese character “崔” is used to write his Korean surname. Photo by Filip Noubel, used with permission.

June 21, 1962, is the birth date of Viktor Tsoi, a Korean-Russian rock star from the late years of the Soviet Union who now enjoys cult status across Russian-speaking countries, 30 years after his tragic death.

Tsoi was born in Leningrad to an ethnic Russian mother, Valentina Guseva, and an ethnic Korean father, Robert Tsoi. Tsoi's father traces his origins to today's North Korea via Kazakhstan, as his family was deported to Soviet Central Asia during Stalin's rule.

Viktor Tsoi studied art, but soon dropped out of school and started playing rock music in the 1970s. During that period, rock was mostly banned by Soviet authorities as a symbol of “Western decadence” incompatible with communist ideology.

After meeting one of the most influential alternative Soviet musicians of the time, Boris Grebenshchikov, in 1980, Tsoi's career would take a turn. By 1982 Tsoi had created his own band, Kino, which propelled him to rapid fame across the Soviet Union. Kino's first album, “45”, was recorded in 1982 together with Grebenshchikov's band, Akvarium. Another album, “Noch,” was recorded in 1986 and released in the US on a double-album titled “Red Wave: 4 Underground Bands from the USSR.” 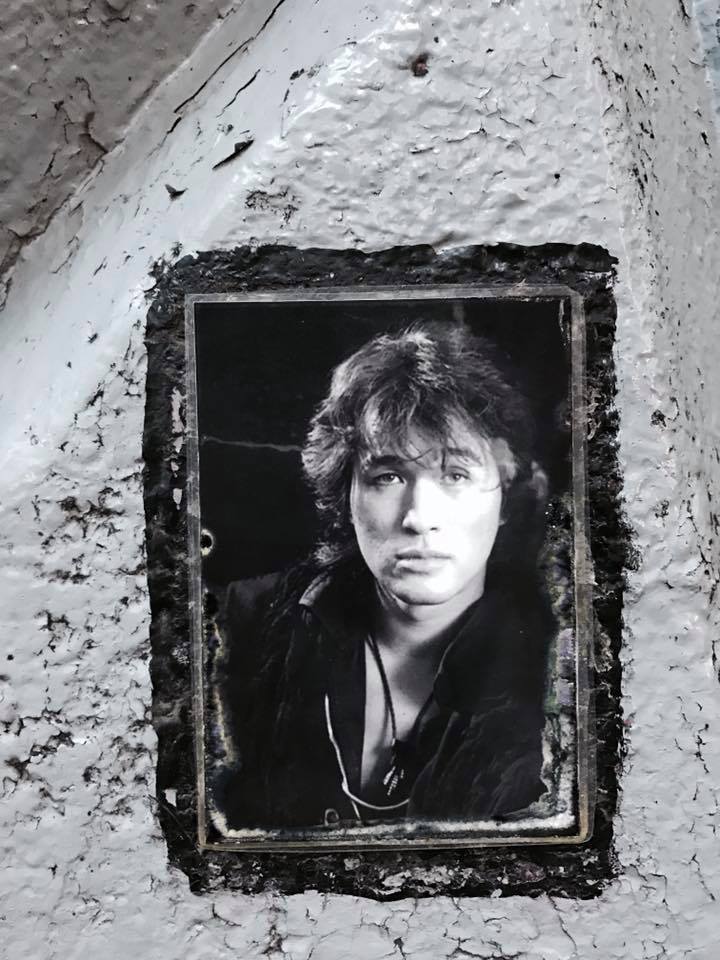 Portrait of Viktor Tsoi on his memory wall in Minsk in Belarus. Photo by Filip Noubel, used with permission.

Altogether Tsoi composed and recorded over 90 songs that became instant hits through unofficial channels, including underground concerts and bootleg tapes, at a time when, due to censorship, tape recorders were difficult to obtain.

Regardless, the lyrics of his songs spread by word of mouth, attracting underground audiences with their messages of youth empowerment, independent ideas, and absence of praise for the Communist Party. The song “And from now on we are the ones in charge” (Дальше действовать будем мы), for instance, has a line that goes: “So we came here to claim our rights: yes!”  (И вот мы пришли заявить о своих правах: “Да!”)

After perestroika, which allowed more space and tolerance for alternative ideas, particularly in the arts, Tsoi and Kino would be allowed to perform officially and to be interviewed on Soviet television.

In 1988, Tsoi appeared in a film called “The Needle” (Игла) by director Rashid Nugmanov that was filmed in today's Kazakhstan. It caused a sensation with its depiction of drug addiction, an issue that was unmentionable under Soviet ideology and considered an exclusively “Western” condition, in spite of affecting many young Soviets, particularly after the Soviet war in Afghanistan.

The movie, which also features songs by Kino, is available on YouTube:

On August 15, 1990, Tsoi died in today's Latvia at the age of 28, after his car collided with a bus. His untimely death became the subject of many myths, including the idea that he had committed suicide, or had been killed by the Soviet secret service.

Thirty years after Tsoi's death, he continues to have countless fans in Russian-speaking countries and communities and has inspired a wide range of people, from musicians to astronomers.

On YouTube, some videos of his songs have over 37 million views. Some of his hits have also been covered by contemporary stars of the Russian rock and pop scene, such as the Tatar-Bashkir singer Zemfira in her remake of the song “Cuckoo” (Кукушка):

His songs are also remixed and played by DJs across Russian-speaking countries and communities. Global Voices talked to DJ Hem, a native of Tashkent who lives in Helsinki and runs live DJ sessions of Soviet music on YouTube, including a special Tsoi Birthday Party on June 21. Here is DJ Hem's take on the Tsoi phenomenon:

The band Kino was the second band from Leningrad that I had ever heard, with the song “Aluminium Cucumbers“, which with its content and lyrics somehow dramatically changed my perception of rock of and Soviet rock.

I think Kino's popularity is due mostly to Tsoi's heroic aura — his bearing on stage, his style of performance, his voice, his entire image… This was missing on the [Soviet] stage, and in life.

Back then this was an issue for the entire country that had just completely changed its direction. Generations of people who had grown up on images of [Communist] heroes suddenly experienced an internal vacuum because of perestroika. People had no experience of living without heroes. Thus, a hero had to show up, and this happened with Viktor Tsoi.

The lyrics of his songs are unlikely to get old. And the songs with a civic subtext sound very contemporary in the context of the current Russian life, and still relevant. What is extraordinary is that the Russian rock and pop scene hasn't produced to this day any group or singer who could just with three chords touch the soul of such a large number of people!

In 2018, Russian director Kirill Serebrennikov made a film called “Leto” (Summer, in Russian) about Tsoi's life and the making of Kino's first album in the early 1980s. The movie was selected for the Palme d'Or category at the 2018 Cannes film festival.

Tsoi is also an inspiration beyond the world of music and movies: he is an icon of the contemporary urban landscape in a number of post-Soviet cities that display murals, statues, and graffiti celebrating his songs. One popular Tsoi-related graffito is “Tsoi is alive” (Цой жив!).

In Minsk, the capital of Belarus, there is a memory wall devoted to Tsoi in a park in the city center: 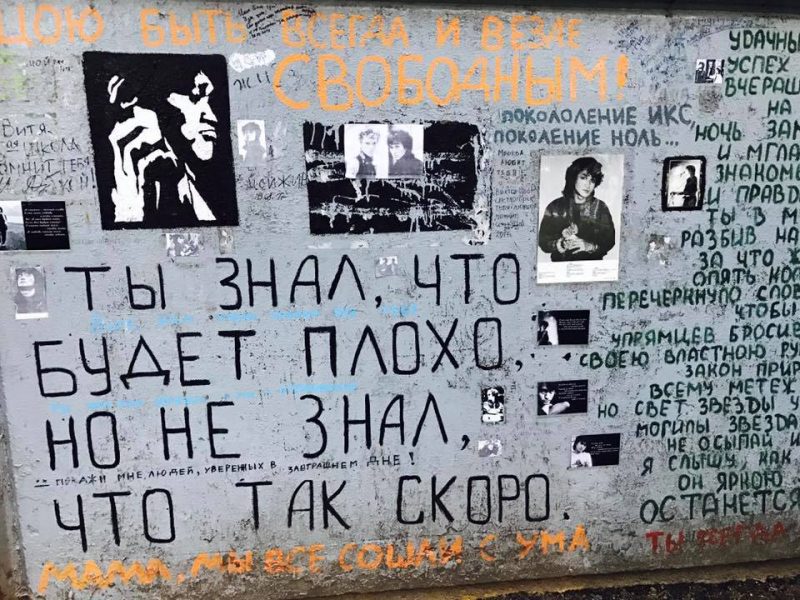 In Almaty, the former capital of Kazakhstan, a statue of Tsoi was erected on June 21, 2018 in honour of his numerous connections to the country. This tweet from May 2019, when the country experienced anti-government protests, features the Tsoi statue in dissident icon mode:

“And there is nothing else
All is within us.” [Lyrics from Tsoi's song “Changes” (Перемен)]

Kyiv, the capital of Ukraine, also has its own Tsoi wall as can be seen in this video:

Tsoi has even inspired the astronomers from Crimean Astrophysical Observatory at Nauchnij, who have named the asteroid 2740 Tsoj after him.

But there is no doubt the thing that will continue to inspire new generations of fans are his lyrics, which people still learn by heart and are quoted and referenced in daily life by Russian speakers around the globe. Among some of his best are the following, from the song “A pack of cigarettes” (Пачка сигарет):

Sitting and looking at an alien sky from an unfamiliar window
I do not see a single familiar star,
I walked all the roads, here and there,
Turned around – and couldn’t find my tracks.

But if you have a pack of cigarettes in your pocket,
Then things are not that bad for today.
And an air ticket to sit on a plane with silver wings,
That as it takes off, leaves nothing but a shadow on earth.