Cameroon's mangroves could 'vanish without action' 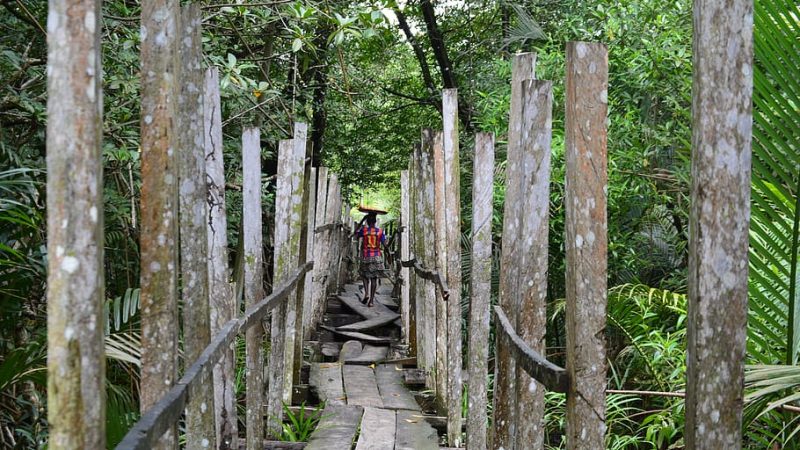 A man walks through the mangroves in a wildlife reserve in Manoka, a town and commune in the Littoral Region of Cameroon, Manoka island, south of the Wouri estuary, within the Douala Edéa Wildlife Reserve, Cameroon. Photo via Piqsel, public domain.

In Cameroon, extensive mangrove systems provide an abundance to the communities that surround them. From firewood to fish, communities have depended on mangroves, locally known as matanda, for years.

Due to overfishing and overharvesting its wood, mangroves have seriously depleted in recent years. Sea level rise due to climate change also threatens the mangrove ecosystem. Now, during the COVID-19 pandemic, a spike in the price of fish is largely blamed on mangrove depletion.

Jocien Siyir Kinyuy, a student living in Buea, the southwest regional capital, told Global Voices that the price of fish has definitely increased in the market during the pandemic. “I used to buy a kilogram of fish for 650 francs [$1.11 United States dollars] but now I get it at 750 francs [$1.28 USD], sometimes 800 [$1.37 USD],” she said.

Kinyuy notes that most fish at the market is now imported, driving the prices up even higher. “From my experience, it’s even more expensive to buy from the petit traders down at Limbe beach who buy from the fishermen,” adding that foreign companies dominate the market and pay high taxes. However, Cameroon placed a temporary ban on importing fish from China due to the coronavirus in February.

As of 2010, Cameroon’s mangroves were nearly 75 percent depleted, but today’s figures are likely much higher, according to the Andalou Agency.

Mangroves offer a variety of benefits to surrounding communities, providing a favorable environment for most fish species — including crabs — to reproduce, according to Chechua Manzo, a master’s student in natural resource management in Cameroon. They are also home to many migratory birds.

Mangrove roots act as good speed brakes for waves, providing calmer waters for toddler fish and crabs to lay eggs. In 2009, over 5,000 tons of fish were sourced from the mangroves, according to a study reported in BusinessCameroon. “Bossu, bar, mulet, machoiron are some of the types fished in these mangroves — the most sought after by consumers,” the report said.

Over the years, fishing communities have placed immense pressure on mangroves, where over 80 percent of the population relies on mangrove wood to smoke and preserve their fish.

“Passing along the village streets of Yoyo [Littoral coastal Sanaga-Maritime area], one can see hips of harvested mangroves … and the people say it’s comfortable … to use [the wood] as fuel to smoke their fish,” Manzo explained.

On Twitter, Regina Fonjia Leke explained how this crisis plays out in the town of Mouanko, Sanaga-Maritime area:

2500 cubic metres of #Mangroves are lost everyday in #Mouanko #Cameroon. They are harvested to smoke fish n this pressure has led to a drastic reduction in the pop of this vital https://t.co/dX4mGIydMI local NGO,CWCS is trying to turn the tides. Watch how https://t.co/vXFsxI1utc

“The main threat to mangroves is the Nipa palm [variety],” Manzo told Global Voices, adding that extensive construction in Cameroon’s Littoral region has seriously threatened its extinction in this region.

Meanwhile, Cameroon’s Ministry of Forests and Wildlife sells mangrove timber used for construction on destroyed mangrove areas for less than one dollar, according to the Andalou Agency.

The government has made several efforts to safeguard Cameroon’s mangrove ecosystems. In 2006, Cameroon signed the Ramsar Convention, the only international legislation that focuses specifically on wetlands conservation. In March 2007, Cameroon created its own National Ramsar Committee on Wetlands.

At that time, the Ministry of Environment decreed that 30 percent of Cameroon’s land should be preserved for natural resources, including mangroves, and “this 30 percent … is divided across five agroecological zones,” explained Songe, the southwest regional environment delegate.

In 2006, the government worked with the Food and Agriculture Organization to encourage local communities to find alternate ways to smoke fish instead of harvesting mangrove wood.

These efforts continue in various ways:

Visit to Manoka island with @CIFOR, where the #Cameroon team is working with a local women association to develop a more efficient technology to smoke fish using less wood to protect the mangroves! pic.twitter.com/81fuc4Csyz

Fishing (for men) and fish smoking (for women) are the only livelihoods in the island. This is why @CIFOR and its partners are helping the community to better manage natural resources. pic.twitter.com/wvuOwRRgL6

In 2011, the government invested in reforestation efforts, “but the wood is often cut down in less than three years and with the government’s permission,” explained Langmi Moses, who heads a mangrove conservation agency, to Andalou Agency. He continued:

By cutting down mangrove trees that have been planted in less than three years and with the government's permission, operators are destroying the mangroves and preventing their regeneration. … We can't reforest all the time when our work is destroyed after two years.

However, overexploitation continues to be the main cause of mangrove depletion, according to Jean Marie Tchouala Wabo, a Cameroonian forest manager.

“These mangroves are being vandalized under the watchful eye of the government,” he told Anadolu Agency.

What a sad reality about the mangroves of my home country! I have been studying these mangroves for a while now and I must say something urgent needs to be done to turn the tides around.
Cameroon's mangroves could vanish without action https://t.co/ROdAczQbR1