Kano State government used 'its power to hide these deaths' 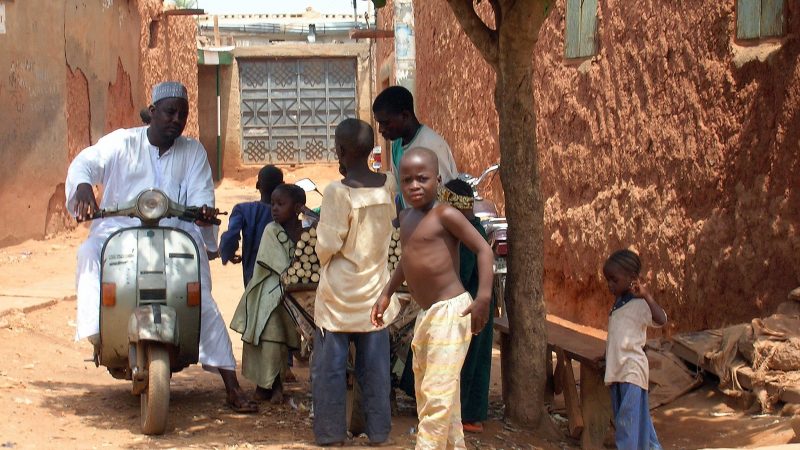 Editor’s note: This story is the first part of an investigation on the COVID-19 “mysterious” deaths in Kano State, Nigeria. Read Part II here.

For months, confusion and conjecture surrounded the story of mass deaths in Kano State, northwestern Nigeria, that occurred in April during the COVID-19 pandemic.

After several weeks of speculation and official denial, on June 8, Nigeria’s Health Minister Dr. Osagie Ehanire confirmed that a surge of mysterious deaths recorded in Kano State was “triggered by or due to COVID-19.”

Ehanire stated that Kano witnessed 979 deaths “at a rate of 43 deaths per day” in April. The deaths, within eight local government areas of Kano State, affected people 65 and over with pre-existing conditions.

This official validation ended the conjecture regarding the cause of this death spike in Kano. Ehanire, on May 5, stated that there was “no evidence” linking the Kano deaths to the coronavirus. This claim came a day after the head of the presidential COVID-19 task force said that the deaths were indeed caused by the virus.

Social media narratives, as well as investigations and documentation by both citizen media and journalists, may aid in understanding the full scope of this story.

With the Global Voices’ Civic Media Observatory on COVID-19, I conducted qualitative, ethnographic monitoring of Nigeria’s social media space that revealed several dominant narratives about the Kano deaths on social media, including denial and suppression of news about the deaths, disinformation, ethnically and religiously divisive messages, political rivalry and the outbreak of similar mysterious deaths in neighboring states.

What really happened in Kano?

150 people were reported dead in 2 days, no action but silence from Nigerian Govt.

There is both reality and disinformation about #Kano mass deaths. Our report will clarify. pic.twitter.com/6lBlADp0yQ

However, there was confusion regarding the exact number of deaths.

A chilling news report by Nigeria’s national TV channel shared on April 21 by activist Badero Olusola, on the Concerned Nigerians Facebook page, garnered 13,000 views, 127 likes and over 300 comments. The report showed that in just three days, April 17 to 19, over 150 people had been buried in Kano. Gravediggers had a hard time keeping up with the fatalities, with as many as 40 people reportedly buried daily in a cemetery in Kano metropolis.

However, an investigation by Dr. Zainab Mahmoud, a Kano youth activist, put the number at over 100, as shared on Twitter on April 25:

Three days ago my colleagues and I decided to investigate the deaths in Kano. By day 2, we had received reports of over 100 deceased people. A large number highly suspicious for COVID 19.

That same day, the Nation, a Nigerian daily, tweeted a report containing a list of about 20 prominent people who had died in Kano. Premium Times, a Nigerian online newspaper, also reported about the death of seven professors in Kano.

The Kano casualties were no longer faceless individuals.

Unpacking the cause of deaths in Kano

Media narrative surrounding the Kano deaths revealed that the Kano State government (KNSG) tried to suppress the news, denied the existence of a political rivalry in Kano that may have interfered with a prompt COVID-19 response and failed to account for the absence of proper documentation about the deaths.

On April 26, KNSG stated that the deaths were “caused by complications from hypertension, diabetes, meningitis and acute malaria and not the COVID-19 pandemic,” reported Reuters.

However, not everyone accepted the state government's position.

Usman Yusuf, a professor of hematology-oncology, in an op-ed by BusinessDay newspaper, stated that “KNSG lacks the will, capacity, compassion, transparency, or the trust” to mitigate the crisis. Yusuf further asserted that the government was “in denial and doing all in its power to hide these deaths.”

Nigerian investigative journalist Fisayo Soyombo in a Facebook post attributed the deaths and sluggish COVID-19 response in Kano to the “collapse” of three agencies after their personnel tested positive to coronavirus, including the testing laboratory, the team responsible for retrieving patients and the state committee on COVID-19.

Soyombo wrote that the situation was further aggravated because “the state government played needless politics” by initially declining the offer by the Federal Ministry of Health to take over the COVID-19 response.

The KNSG also rejected a donation of a hospital as an isolation centre due to political rivalry.

But why reject donation of a newly-built 60-bed hospital as isolation center for Coronavirus patients?

Is Kano aware they will need any free beds they can get? Are we still playing politics with people’s lives?

Former Kano State Governor Rabiu Kwankwaso had on April 20 donated the 60-bed Amana Hospital in Kano, owned by his foundation, to the state government as a coronavirus isolation center, but the government denied receiving any such donation.

There has been a political war of attrition between former governor Kwankwaso and his erstwhile then-deputy Ganduje (now governor) since 2015.

Kano is predominantly Muslim, with existing tensions between science and religion that can sometimes affect the government's handling of burials and death certification.

Conducting autopsies is a sensitive issue in Kano because “a lot of things in science and medicine are not accepted by all,” said Dr. Sanusi Bala in an interview with Punch newspaper. Bala, head of Kano State chapter of the Nigerian Medical Association, said that autopsies could not be carried out without express consent from relatives of the deceased.

Mubarak Bala, a self-proclaimed atheist and activist from Kano, also observed in a Facebook post that the lack of birth and death certifications and the inability of health officials to conduct autopsies also had an impact on mass deaths in Kano State. 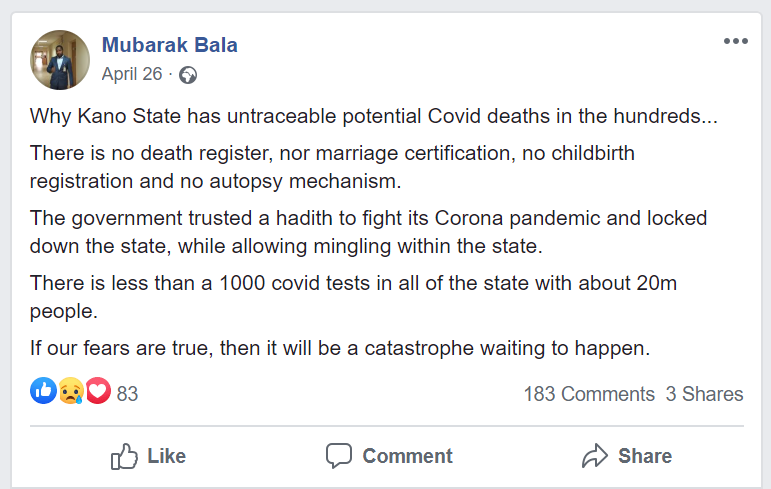 Instead, KNSG conducted a “verbal autopsy” on April 28 to investigate the cause of the deaths. A verbal autopsy is an epidemiological method that uses techniques developed by the World Health Organization to examine the cause of death in populations lacking proper documentation systems.

The result of the verbal autopsy conducted by three doctors in Kano, Maryam Nasir, Zainab Mahmoud and Khadija Rufai, was frightening. Within 48 hours, the researchers discovered “183 deaths in Kano metropolis that occurred between 18 to 25 April 2020.” The symptoms, “a trend of febrile and respiratory illness that progresses to death within one to two weeks,” were consistent with COVID-19.

Dr. Osagie Ehanire's admission in June — linking the Kano deaths with the coronavirus — finally confirmed information that had already been circulating in Nigeria’s digital public square since April.