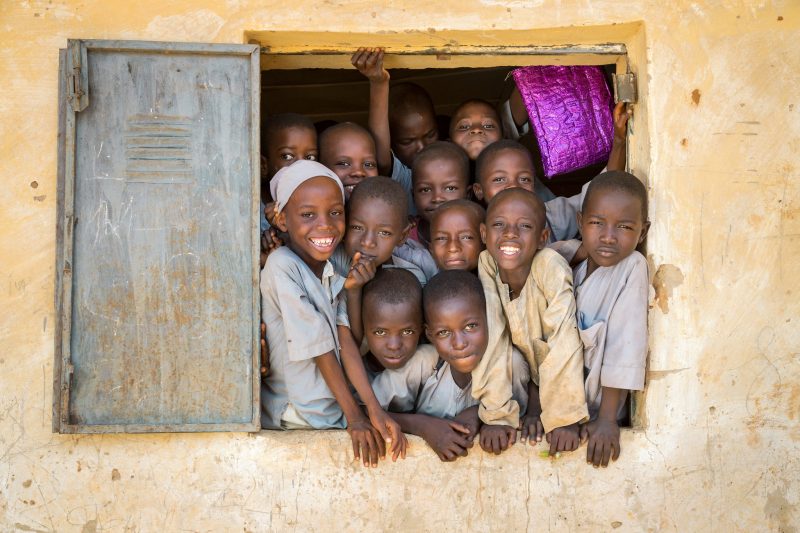 Editor’s note: This story is part of a two-part series on the COVID-19 “mysterious” deaths in Kano, Nigeria. Read Part I here.

In northern Nigeria, a series of “mysterious” deaths in April — during the height of the COVID-19 pandemic — sparked a flurry of confusion and denial by government officials.

As social media narratives began to piece together possible reasons for the spike in deaths, dis-and misinformation were driven by ethnoreligious tensions in the predominantly Muslim northern region.

To complicate matters, a series of forced relocations of boarding school children from Kano, northwest Nigeria, back to their home villages sparked concern about possible exportation of the coronavirus to other parts of the country.

In this complex, layered context, it has been difficult to gain a full understanding of the reasons behind the mass deaths in Kano State.

In Nigeria, children known as Almajirai (“religious migrants”), are sent to Islamic boarding schools in the predominantly Muslim northern region of the country. These children are usually from very poor homes and cannot afford formal education.

Almajirai children in this region often beg from house to house in groups, “scrambling over a small plate of food” or “singing the yar bakara [‘begging songs’],” asserts journalist Farida Adamu.

In the middle of the pandemic, this vulnerable group of children was relocated from Kano State to their home states and in the process, some allegedly exported COVID-19 to other states in the region.

On May 2, The Cable, an online newspaper, reported that 6 out of 38 Almajirai who were forcibly relocated from Kano by the state government to Bauchi State, had tested positive for COVID-19.

From Bauchi to Kaduna, Kano is seriously exporting #Covid19 cases.

Almajirai constitute a significant portion of Nigeria’s 13.2 million out-of-school children according to the United Nations Children’s Fund (UNICEF). With an average school attendance rate of 53 percent in northern Nigeria, this means that more than half of these children do not attend school.

Eight years ago, President Goodluck Jonathan spent 15 billion naira (about $39 million US dollars) to build Almajirai schools across northern Nigeria, with the aim to integrate these children into the formal education system. The schools are now in ruins — the plan was rejected by influential northern leaders, including the Kano State Governor Abdullahi Umar Ganduje.

The region also experienced other forms of community-based transmission that resulted in “mysterious deaths.” On May 6, Sahara Reporters, an online news portal, reported that over 155 people died in Yobe State in northeastern Nigeria. A day earlier, Premium Times reported a spike in community transmission in Jigawa State resulting in “strange” deaths.

In these cases, the fatalities displayed symptoms similar to COVID-19. Cemeteries reportedly overflowed with corpses — which set these communities on edge. 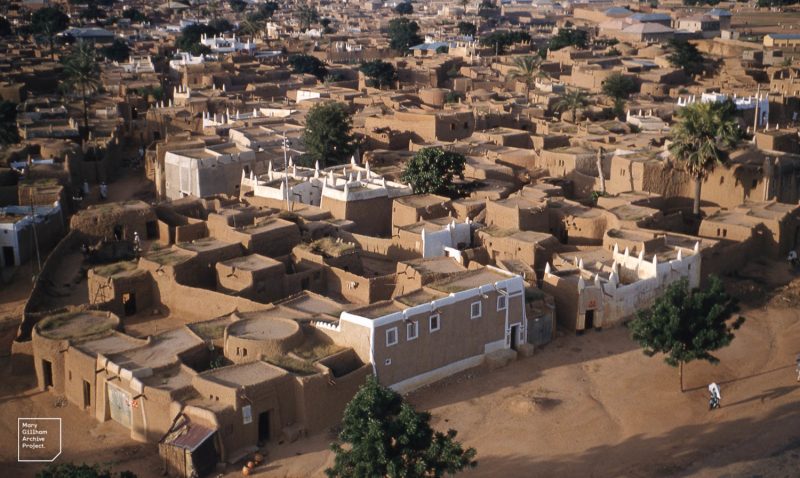 The mass deaths in Kano State fueled long-standing ethnic and religious tensions between northern and southern regions that were on full display in heated conversations on Twitter.

Both figures were buried on May 3, 2020, but videos began to circulate online that spread disinformation about the circumstances of these burials.

The Emir of Rano, Tafida Abubakar ll, died on May 2, as reported by Daily Trust, a Nigerian newspaper. The Emir was one of the four newly constituted kingdoms in Kano.

A video claiming to be the burial of Emir of Rano began trending on Twitter:

Burial of the Late Emir of Rano in Kano today. The cases of new cases that will be coming from kano in the next 1week will be alarming. I doubt if they are aware of coronavirus @NCDCgov #COVID19Kano #COVID19 #StaySafeNigeria #COVID19Nigeria pic.twitter.com/UD8ZnPrTTL

But it was false:

The remains of late Emir of Rano buried inside his Palace approximately an hour ago, with less than 20 people attended the burial, but a fake video of thousands people has been trending throughout the day, purported to be his burial, it was not, Rano Emirate official told me.

Rather, the video was that of the burial of Sheikh Goni Modu, in Borno State, who was buried on May 3. Contention surrounded the lack of social distancing during the burial. 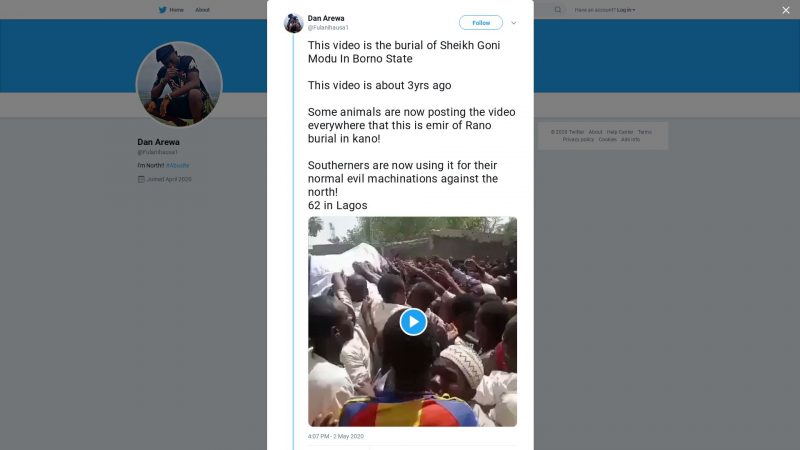 This individual gave false information in his tweet, stating that the video showed the burial of Sheikh Goni Modu from three years ago. He refers to “animals” who share this video as “evil machinations against the north.”

These heated conversations about the burial videos clearly degenerated into ethnic and religious mudslinging that drew from long-held stereotypes between northern and southern regions of Nigeria.

Comments by the Twitter users below derided the “ignorance” of northerners or described them as “illiterate”: 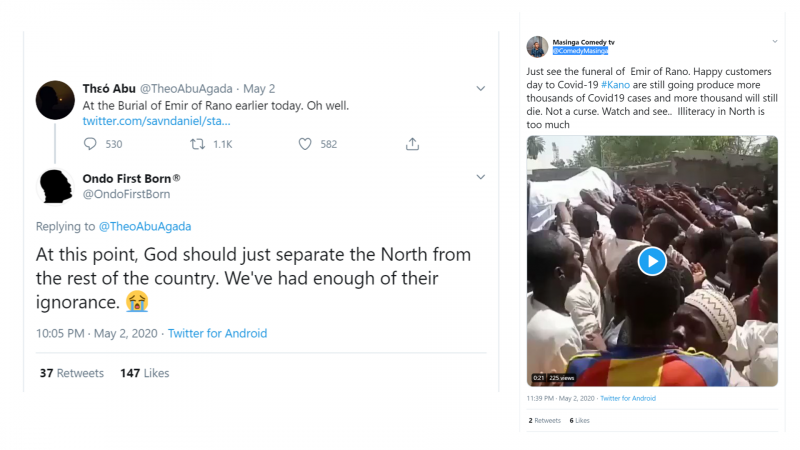 These comments precipitated a clap back, with this Twitter user saying that southerners are “usually waiting” for the slightest opportunity to deride the north as “backward and illiterate”:

It is because those who are just waiting on the edge of their seats to insult ‘backward and illiterate Hausa Muslims’ (that everyone in the North apparently are’) can't tell the difference between spoken Kanuri and Hausa. Ignorance fuels bigotry.

This deep mistrust was also evident in other conversations. 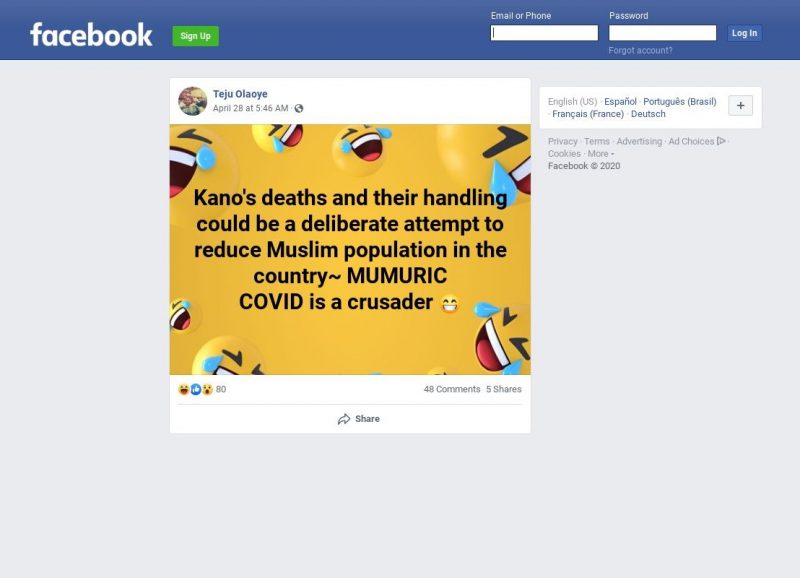 The Muslim Rights Concern (MURIC) considered the deaths in Kano as a “deliberate attempt” to depopulate Nigerian Muslims. Meanwhile, the Northern Elders Forum claimed that some states were “playing politics” with COVID-19 statistics to get more funding from the federal government.

The Kano State Government (KNSG) was “evidently unprepared” and acted “reactively” to the pandemic, according to a report by the Centre for Democracy and Development (CDD).

After Kano’s index COVID-19 case was established, it took over a month — until April 11 — to set up a testing center at Aminu Kano Hospital. Yet, the government continued to relax lockdown restrictions in the state for frivolous reasons — despite rising death rates.

I hope when this is over, the people of #Kano will remember that their governor put their lives on the line for a few more dollars and that a good number of people in the state, because of ignorance, gullibility, fanaticism or sheer stubbornness, played right into his hands.

Nigerian writer Abubakar Adam Ibrahim aptly summarizes this tragedy. Sadly, the KNSG deflected responsibility onto everyone else but themselves.