This is scaremongering taken to a new level 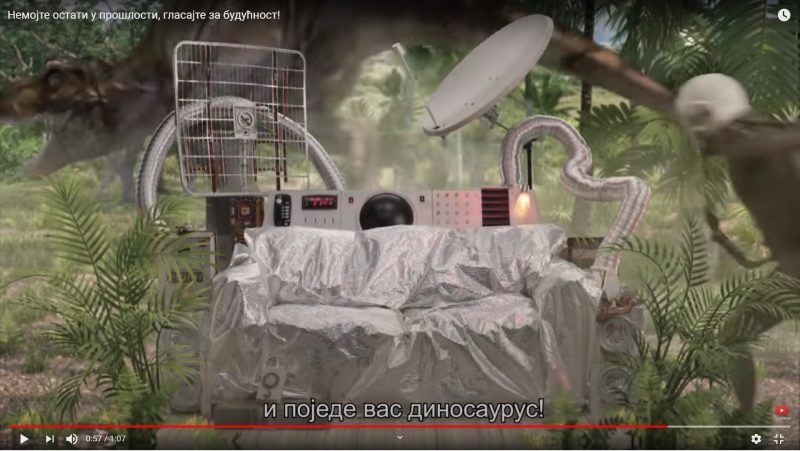 Serbia has entered a an election silence before a vote scheduled for Sunday, June 21, which is probably a good thing.

Since the biggest opposition parties have declared a boycott, blaming the government for a failure to provide conditions for fair elections — including freedom of media — the issue of voter turnout has taken on particular importance.

In order to undermine the legitimacy of the ruling parties, some opposition groups like “Don’t Let Belgrade D(r)own” (“Ne da(vi)mo Beograd” in Serbian) staged protests.

The most recent one was in front of the Parliament, featuring their symbol, the rubber duck.

Tweet: Today in front of the Parliament #Boycott2020, tomorrow at the closing of the trial to Jutka in Kruševac  #JusticeForMarijaLukic #JusticeForAllWomenOfBrus
Video: Today we are in front of the Parliament. We call upon the citizens to join the boycott of the fake elections on Sunday. While the fight for free and democratic Serbia is taking place, another  struggle is taking place tomorrow in Kruševac, the trial of [suspected sexual predator] Milutin Jeličić Jutka and we hope for justice for Marija Lukić and all women of Brus.

On June 17, the day before the silent period, the ruling Serbian Progressive Party (SNS) concluded its series of controversial election videos with one addressing people who would abstain from voting.

The video titled “Don't remain in the past, vote for the future!” vent viral across the Balkan region. In a warning tone, the clip presents citizens who would stay at home on election day on Sunday as potentially responsible for the demise of the economy and chaos that would ensue if the opposition unites.

This messaging was complemented by a footage showing “people going crazy” — fighting in the streets and looting.

If the video had ended there, that would be pretty standard scaremongering.

However, the campaign ad then went to a very strange place.

By the time you realise you've made a big mistake, it will be clear that you can't pay the rent. When you can't pay the rent, the only thing left for you to do is build a time machine, go back in time and vote. When you use the time machine you've built to return back in time and vote, you might accidentally travel to distant past and get eaten by a dinosaur!
Why would you like to be eaten by a dinosaur? Don't remain in the past, vote  for the future!

The ruling SNS has named it's electoral list after their leader Aleksandar Vučić, who is currently the president of the country, despite these elections being parliamentary rather than presidential ones.

The SNS has spent its campaign promoting Vučić's cult of personality, drawing on the president's time during a pandemic and generally draining state resources. This is unlikely to earn the party any attention from anti-corruption authorities, however.

Screen shot of the website of Socialist Party of Serbia, with their election slogan “We stand firm” (Ми стојимо постојано) in the header.

Its nominal competitor, the Socialist Party of Serbia, a junior member of the populist ruling coalition, has made campaign missteps of its own.

That party botched its initial campaign video based on the phrase “Count on us” — a phrase made famous in a once-popular Yugoslav patriotic song — by making zombie-like animations of voters the centrepiece.

Their follow-up slogan “We stand firm” (“Mi stojimo postojano” in Serbian) was taken directly from the song “Hey Slavs” – the anthem of disbanded Yugoslavia.

We stand firm
like the big cliffs,
May he be damned, the traitor
of his homeland!

SPS official campaign videos tend to use music from former Yugoslavia, such as anti-fascist partisan songs from World War II like “Through valleys and over hills.”

The irony of the fact that this party, and its late leader Slobodan Milošević, were among the chief perpetrators of the bloody destruction of Yugoslavia, has been largely ignored by the mainstream media.

Also glossed over are ideological inconsistencies. Such as the fact that the socialist party's website has as a key feature a photo of its leader the Serbian Minister of Foreign Affairs Ivica Dačić posing with Donald Trump — a politician who would usually be considered an opposite of socialist.

All these paradoxes aside, Serbia is getting ready to vote. The number of people who are supporting the boycott will remain unknown until Sunday evening.