Taking Hong Kong's temperature: What future for the protest movement?

As crackdowns on protesters have expanded, so too has their 'repertoire of contention' 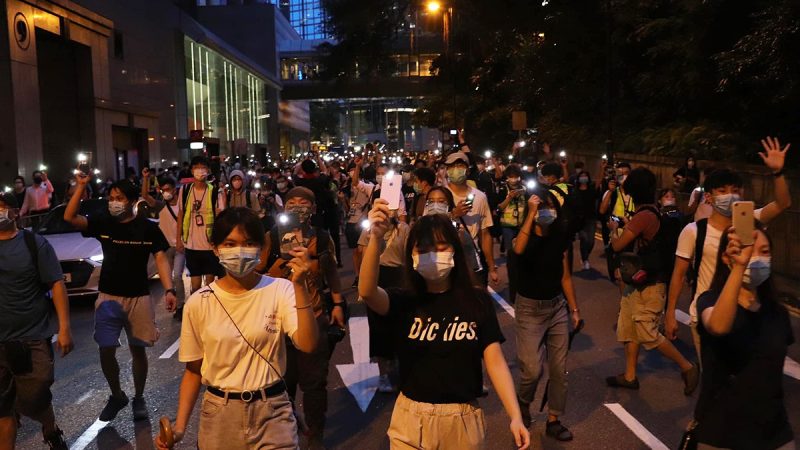 Watery protest in Hong Kong. Image from the Stand News.

Hong Kong's anti-China extradition protests are now a year old. Hong Kong online media outlet Stand News curated a series of articles to reflect on the opposition movement. Global Voices is publishing edited versions of these posts under a content partnership agreement. The original Chinese version of the post below was written by Francis Lee, Professor in the School of Journalism and Communication at the Chinese University of Hong Kong.

Since the outbreak of COVID-19 in late January, the Hong Kong police has banned all public assemblies and rallies, citing disease control regulations known as the Prohibition on Group Gathering.

The regulation has made it impossible for any organization to call for massive protests. The risk for individual protesters braving the streets, meanwhile, is growing, as Beijing prepares to impose a game-changing national security law on Hong Kong.

Today, the protests are much smaller than they were in June 2019, when hundreds of thousands of people regularly took to the streets in the biggest anti-government demonstrations in history.

Against the backdrop of the national security law controversy, 41.4 percent expressed zero satisfaction with the implementation of “One Country Two Systems” in Hong Kong.

The interviewees in the poll were also asked if they support or oppose the continuity of the anti-China extradition protests, regardless of form or strategy. The poll found that 39.1 percent support the protests with 39.2 percent opposed. Supporters of the pro-China establishment claimed the result indicates that the movement is losing support. That interpretation may not reflect the reality, however.

Historically, polls have shown that around 20-25 percent of Hong Kong citizens did not support anti-extradition protests in the first place. The global COVID-19 pandemic meanwhile has exerted further pressures on the city's economy, further weakening the appeal of protests.

With that in mind, the fact that the protests that brought the city to a months-long standstill have retained support from a solid two-fifths of respondents is nothing short of remarkable.

This result bears comparison with a poll in November 2014, two months after the debut of pro-democracy Umbrella Protests.

That poll saw 70 percent of interviewees support the termination of the massive peaceful sit-in protests.

Responses in the CCPOS survey differ significantly across age groups.

For some who oppose the continuation of the anti-China extradition protests, opposition is strategic rather than hostile towards protests per se.

Commentaries on various social media outlets in recent weeks have highlighted doubts that protests can generate positive effects in the current repressive political environment, since riot police are able to use as much force as is needed to overwhelm and arrest protesters.

These commentaries often stress that with Beijing determined to dismantle ‘One Country, Two Systems’, Hong Kong's future depends on diplomatic interplay between the U.S and China, rather than on street protests.

This cost and effect calculation is particularly evident in responses regarding Beijing’s imposition of a national security law on Hong Kong.

Although 63.5 percent of interviewees worried that the law would harm Hong Kong citizens’ freedom and rights, only 59 percent of those same respondents supported the continuity of the anti-China extradition protests, while 15.1 percent opposed further protests.

Expanding the ‘repertoire of contention’

Although restrictions enforced during the COVID-19 pandemic have limited the scale of protests, they have not stopped them completely. Beginning in late April, a number of “protest song” flash mobs sprang up in major shopping malls.

On May 24, thousands participated in an illegal rally against Beijing’s decision to impose the national security law on the city — the first large protests since COVID-19 restrictions went into force.

Then, on June 4, tens of thousands joined up for an annual candlelight vigil in Victoria Park and a dozen other districts across Hong Kong. This year was the first time the vigil was outlawed by authorities, who cited disease control restrictions.

Finally, on June 9, thousands of protesters rallied in Central district to mark the anniversary of the one million-strong rally against the China Extradition Bill.

All these actions have taken place despite the likelihood of arrests for participating in illegal assemblies.

Doubts over the sustainability of the anti-China extradition protests have been raised since the protests were less than a month old.

But as the crackdown on protesters has expanded, so too has their repertoire of contention.

Eventually, massive mobilizations in June gave way to district-level rallies and the setting up of Lennon Walls all around Hong Kong in July, followed by the peaceful sit-in at the city's International Airport and the formation of human chains across the city in August 2019.

After the victory of the pro-democratic alliance in the district elections in November, supporters of the movement have started advocating for the idea of a “yellow economic circle”, wherein pro-establishment businesses are subjected to popular boycotts, while “yellow”, or pro-movement businesses, receive popular support.

Supporters have also called for the setting up of professional groups and labour unions to prepare for a future general strike.

This is the likely future direction of the protests, with resistance seeping into everyday activities, leaving the  establishment facing a long war of attrition.

Then again, disease control restrictions cannot last forever, and the possibility that Hong Kong will once more witness massive mobilizations — the increased cost of collective action notwithstanding — cannot be discounted.

* Disclaimer: The author of this post, Dr. Francis Lee, is the main coordinator of the CCPOS poll, which  surveys 800-1200 respondents and has been published on a monthly basis since June last year.