It's time to listen, to learn, and to help 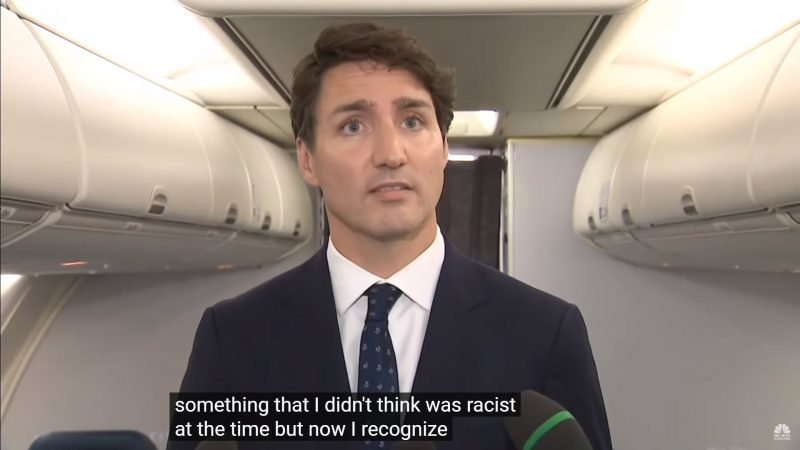 Justin Trudeau in a federal election campaign appearance in September 2019, addressing accusations that he habitually wore blackface until at least his early thirties. The Trudeau Liberals did not lose the election and were able to form a minority government. Screencap from NBC News official YouTube channel.

The United States is going through a tough period right now. Mass demonstrations and protests against deep-rooted racism and police brutality that are met with even more racism and police brutality. An economy that has been shut down by a pandemic that has annihilated millions of jobs. An incompetent response by authorities to COVID-19 that has shut down entire cities, and is now seeing wave after relentless wave of new infections and mortality all across the country.

And, above all else, an unstable president who threatens to inflict yet more violence, chaos, and death on Americans.

Thanks to this daily cascade of grim news, some Americans friends have turned their gaze northward to my country, Canada. For many Americans, it seems, Canada is a fantasy realm of kindness and good manners, a sexy, country-size Portlandia minus the whimsically giant donuts and the Klan, or an Austin, Texas without tacos or open carry.

On June 11, after nearly two weeks of unrelenting police violence against citizens peacefully protesting the killing of George Floyd and in support of Black lives, the Daily Show released a comedy segment in which Americans pleaded with Canada to invade the US and restore order to the country. By mid-June, the hashtag #InvadeUsCanada was trending on Twitter.

“Compared to the gong show that is the United States, Canada is pretty amazing,” is the kind of thing my Americans friends typically say in these COVID-19 times.

When it comes to racism, the United States is far more progressive than Canada. At least Americans can talk about race. In Canada, thanks to our reputation as “a really nice apartment over a meth lab”, race is almost never part of our national conversation, making racism much more dangerous.

In fact, in a national dialogue dominated by a literal sock puppet, it's not unusual for Canadians to deny racism exists here. Earlier in June, as the protests spread throughout cities in the United States, a prominent media personality, writing in The National Post, one of Canada's two ailing national dailies, stated that Canada is not a racist country. After a “newsroom revolt,” the Post's opinions editor claimed that the column was the result of an editorial “miscommunication.” The story is still live on the National Post website, with a clarification note added at the top.

However, this was not the first time in just the past year that, following a newsroom revolt, a Canadian media outlet has explained away the publication of racist commentary. The problem is, racism in the media is not limited to these high-profile cases. Some commentators are wondering why journalists don't speak up more when racist columns appear in print as a matter of course.

Instances of overt racism in Canadian newsrooms are often explained away as simple mistakes. In June, when Wendy Mesley, an influential CBC media personality, admitted to using the “n-word” during an editorial discussion (as is usual in Canada, the specifics of the incident have not been made public), the excuse she gave is that she was quoting a Black interviewee.

In an open letter to Mesley signed by the Canadian Association of Black Journalists and more than two dozen others, journalist and activist Desmond Cole called on the CBC presenter to provide clarification:

By claiming to have been repeating one of us, she is pushing responsibility for her comments onto us, and doubling down on her racist conduct by refusing to truly own it […] Black journalists are not responsible for Wendy Mesley’s racism, and we are outraged that she is trying to use us as cover for her own choices.

The silencing of Black and minority voices in Canada is not unusual. In 2017, Desmond Cole himself was essentially forced to quit his freelancing gig at the Toronto Star, Canada's largest newspaper in terms of circulation, because of his activism about carding (random street checks by police) and other issues. As the Wendy Mesley story broke, journalists such as BuzzFeed's Scaachi Koul shared stories about how they had been blacklisted by CBC for voicing opinions or have been continually mistaken for other non-white coworkers by colleagues and managers.

Others, such as CBC reporter Angela Sterritt, reported experiencing “lateral violence” from fellow journalists. Some journalists have quit:

Codes of conduct often serve – purposefully or not – to silence marginalized journalists. https://t.co/hVMazD95NC

It's no wonder, then, that Canadian media is largely silent when it comes to covering racism and colonial violence. For instance, it took a foreign media outlet, the Guardian, to break the story that Canadian police were prepared to shoot Indigenous activists who were trying to protect traditional lands from a pipeline project.

This month, white, privileged commentators and people in positions of power have been arguing whether or not systemic racism in exists in Canada even as cruel, tragic examples of police brutality were exposed on an almost daily basis. The alleged chasing down and subsequent beating of an Indigenous man by an officer of the Royal Canadian Mounted Police (RCMP) is just one of several allegations of police misconduct in the far northern territory of Nunavut. In Alberta, dashcam footage was released that showed RCMP officers violently assaulting a prominent First Nations leader. In the same week, police in New Brunswick shot dead two Indigenous people.

Since the COVID-19 pandemic began in March, Canada's police forces have killed more Indigenous people than COVID-19, according to entrepreneur and writer Robert Jago.

So, as The Daily Show was encouraging Americans to share the patronizing hashtag #InvadeUsCanada against the backdrop of the Black Lives Matter demonstrations across the U.S. and Canada, racialized communities in Canada endured brutal violence, and Canadians themselves finally started to talk about and address race, and even about defunding the police.

It must be said, however, that Black journalists, activists and regular Canadian citizens have long struggled to fight for justice and to focus attention on the discrimination that Black Canadians and other people of colour experience in Canada. For example, Edmonton resident Bashir Mohamed, in his spare time, has persuaded a local school board to apologize to a Black student for racial discrimination. Mohamed has also shared his own experiences growing up Black in Edmonton and has brought to light the Alberta capital city's historical ties to the Ku Klux Klan.

Many others have worked hard to ensure Canada's Black history is not erased. In Vancouver in mid-June, Black Lives Matter activists occupied two viaducts that were all that remained of the city's plans fifty years ago to build elevated highways throughout Vancouver. The plans were foiled back then, but not before Vancouver's historic Black community of Hogan's Alley was demolished, and its residents displaced. The Hogan's Alley Society is now campaigning to have the viaduct lands placed into trust.

By treating my country as a cute and cuddly stuffed animal of a nation that is just “better” than the United States, users of the #InvadeUSCanada are effectively silencing Black, Indigenous and other voices in Canada. And they're enabling a typically Canadian sense of smug superiority over our American neighbours.

Most of all, they're helping perpetuate white supremacism in Canada, and an ongoing harmful legacy of violent colonialism that continues to this day.