"Every immigrant story is different"; Part 1 of 2

Screenshot of Brian Heap's short story “Mafootoo,” as it appears on the Granta magazine website.

Brian Heap, a retired educator and former head of the Philip Sherlock Centre for the Creative Arts at The University of the West Indies (UWI) Mona campus in Kingston, Jamaica, confesses to being “shocked and very honoured” at winning the 2020 Commonwealth Short Story Prize for the Caribbean.

His winning story, “Mafootoo,” follows Evadne, a Jamaican immigrant of Maroon heritage living in the United Kingdom, who reflects on her unsatisfying life with her husband as he lies dying in hospital. The piece was chosen from over 5,000 entries and is published in Granta magazine. Five regional winners are awarded each year, from Africa, Asia, Canada and Europe, the Caribbean, and the Pacific.

Heap has worked in theatre and education in Jamaica for over 40 years. A graduate teacher from northern England, he taught at St. Joseph’s Teacher Training College and was director of studies at the Jamaica School of Drama (Edna Manley College of the Visual and Performing Arts). He served as artistic director for the University Players, whose productions of the Caribbean and other classic dramas garnered numerous accolades, including Jamaica’s annual International Theatre Institute Actor Boy Awards.

We recently chatted, via email, about storytelling — both in the theatre and on the written page. In this, the first instalment in a two-part series, we talk about some of the nuances of his winning story and the Jamaican immigrant experience in the UK. 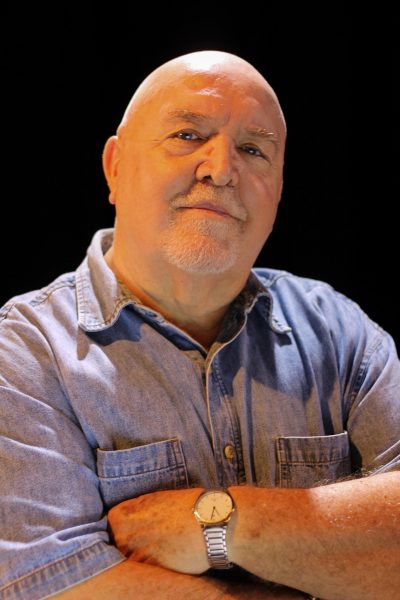 Emma Lewis (EL): The chair of judges, Nii Ayikwei Parkes, praised the five regional winners of the 2020 Commonwealth Short Story Prize for “their lateral leaps, their use of language, voice and subversion — and their sheer courage.” How much of a brave leap did you take to write this story?

Brian Heap (BH): I suppose it does take a certain amount of artistic courage to try to find more innovative ways of shaping the form of a story, and even in presenting different kinds of content and language. A friend who read ‘Mafootoo’ told me that the protagonist, Evadne, is essentially Jamaican but ‘unusual’ and I was grateful for that observation. As a writer, you don’t want to be reinforcing stereotypes in your work. But also I didn’t want to have to spend more time than was necessary explaining Maroon culture to readers. However, I’m not totally convinced that the greatest courage lies in the writing process so much as in making it available for others to read. You can never easily predict just how your readers are going to respond to your work, especially if it might be considered ‘unusual.’

EL: You pointed to a link between the Maroon culture and Islam, which Evadne seems drawn to. Is this something you researched for the story?

BH: I worked with [Jamaican cultural historian, anthropologist and musicologist] Dr. Olive Lewin for many years. She did a lot of research into Maroon culture and was herself initiated as an Honorary Maroon. I heard the use of the Muslim greeting among the Maroon elders myself during our many field trips, then later discovered that UWI historian Dr. Sultana Afroz had written about Islamic retentions among Africans transplanted to Jamaica. Her work was apparently considered controversial and she eventually returned to her home in Bangladesh. But for the purpose of the story, it is something I heard first-hand. 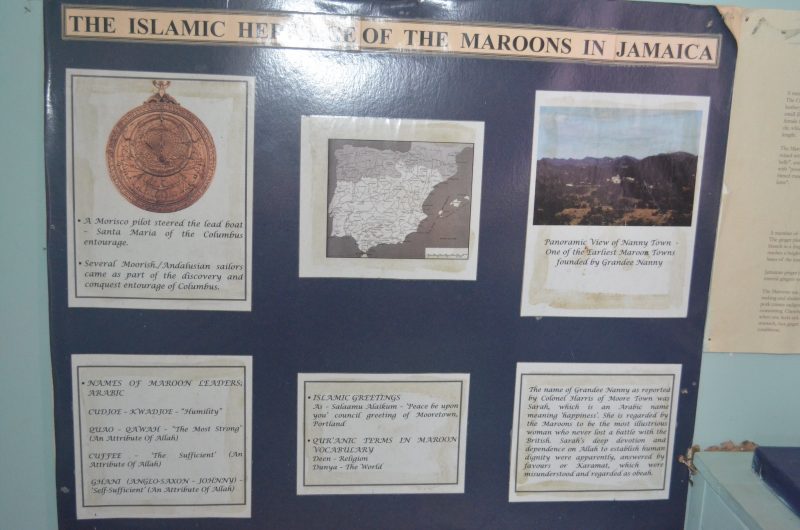 A display about the Islamic history of Maroons in Jamaica. Photo by Kent MacElwee on Flickr, taken at the Maroon Festival in Accompong, in Cockpit Country, Jamaica, January 6, 2013. CC BY-NC-ND 2.0.

EL: Mafootoo, which is the cacoon vine used by the Maroons for everything from trap setting to furniture construction, is used symbolically in the story. The plastic tubes Evadne's husband is hooked up to in the hospital seem to entangle him like vines. I don't know whether to feel sorry for Hubert, or impatient with him like Evadne does. How do you feel?

BH: I keep pointing to the fact that Evadne has stuck by this man for fifty years and she’s put up with his impracticality for all that time. There is a great deal of love and affection there. However, her chance to return to nature and the hills of Jamaica is clearly the result of her kindness to others and the fact that she is the steady one in the partnership.

We don’t hear much about her career in England but it is made clear that she had one, plus she cooks and cleans and pays the bills. She is the responsible one. One gets the impression, on the other hand, that Hubert is a self-centred individual, constantly following schemes that don’t result in much, has little time for holidays, and ends up with the ‘stroke he worked for’. His ‘Mafootoo’ of the life-support machine evokes a stark separation from the natural world of the cacoon vine.

EL: Would you call “Mafootoo” a typical immigrant tale of struggle and overcoming, or is it one of resignation and loss? How has the experience of Jamaican immigrants in England evolved, and did you draw on any of your own experiences in writing it?

BH: I’m not sure what a typical immigrant tale is. People from the Caribbean have migrated all over the place. During the 19th century, Jamaicans even went to the Gold Rush in the Yukon Territory. Mary Seacole first travelled to England when she was just 16 years old. I think every immigrant story is different and we still haven’t told enough of them.

Some involve spouses, sons and daughters who left and were never heard from again. Some migration stories involve entire families broken apart, and second families being established in the host country. Casualties of migration include abandoned children, aged parents and lost loves.

I did see some of that for myself growing up in England — the psychological scars left by separation, as well as the sometimes hostile environment of the assimilation process. The Windrush scandals have thrown a lot of that into sharp relief. I think the experience of Jamaican immigrants in England has evolved, because their children now have sufficient confidence to challenge history by pulling down the statues of the very people who enslaved their ancestors!

EL: Are there more stories to be told about Jamaicans in England — and the English in Jamaica? Or, perhaps “straddling the Atlantic,” which Evadne was considering?

BH: Oh, absolutely. Jamaica is so rich in stories that it surprises me that in popular culture we keep going back to the same old narratives of sex and violence in very stereotypical ways. I worked with [Jamaican cultural historian, anthropologist and musicologist] Olive Lewin and the Jamaica Memory Bank for many years and some of the stories our older informants told were absolute treasures. It’s so important for us to delve into the inner life of Jamaican subjects, and also to realise that a great deal of Jamaican knowledge and tradition resides among the citizens of the Jamaican diaspora, as it does in the case of Evadne.

Part 2 of this interview is here.