Migrant workers face COVID-19 with no medical care or unions 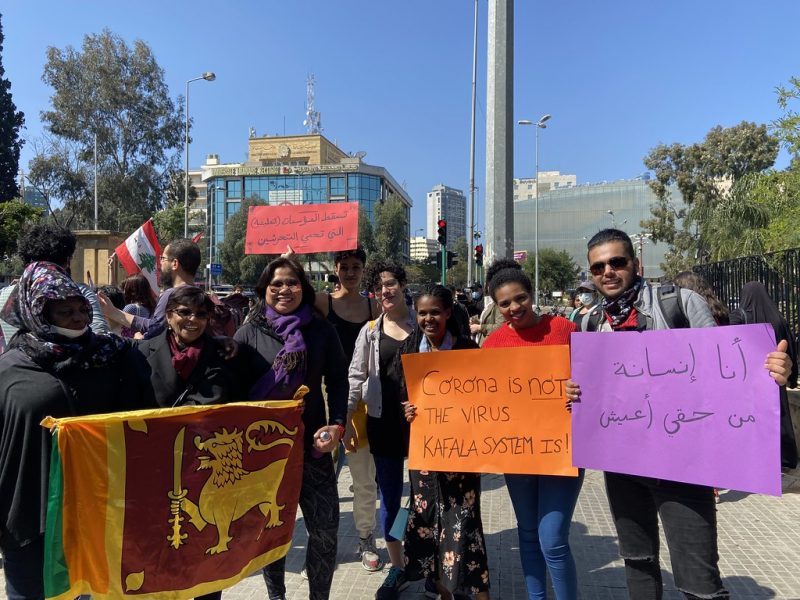 Anti-kafala demonstration in Lebanon. The sign in Arabic reads “I'm a [female] human and I have a right to live.” Photo by International Domestic Workers Federation, licensed under CC-BY-NC-ND 2.0.

This post was written by Khalid Ibrahim, executive director of the Gulf Center for Human Rights (GCHR), an independent, nonprofit organization that promotes freedom of expression, association and peaceful assembly in the MENA region.

Migrant workers in the Gulf region and neighboring countries have been subjected to fierce campaigns calling for their deportation that is riddled with racist speeches and hatred. They have been left alone to face the novel coronavirus (COVID-19) pandemic with no access to medical care or unions, according to research by the Gulf Centre for Human Rights (GCHR).

Over the years, migrant workers in Lebanon, Kuwait, Saudi Arabia, the United Arab Emirates (UAE), Qatar and Bahrain have been subjected to massive human rights violations through the notorious kafala (sponsorship) system that strips them of their basic civil and human rights. They lack the right to move, travel or change work, the right to health care and the right to union representation or formation of organisations. In addition, migrant workers are denied the right to citizenship — even if they spend their whole lives working in these countries.

The kafala system, which enshrines discrimination and exploitation, contradicts the principles of human rights and modern work systems that are guaranteed under the International Convention on the Rights of Migrants and Members of their Families, signed in 1990. This convention entered into force on July 1, 2003, after being ratified by 20 states, but has not been signed by the Gulf states and Lebanon.

With the collapse of the Lebanese pound and the stress of COVID-19, migrant workers — especially domestic workers — face extremely harsh conditions. The Lebanese labour law does not protect domestic workers  — who are usually women — because they are subject to a sponsorship system that links their legal status with a contractual relationship with employers. At the end of this contract, workers lose their legal status and face possible detention and deportation. Likewise, they can only change their place of work with employer consent, which exposes them to exploitation, forced labour and human trafficking.

The number of migrant domestic workers in Lebanon stands at 250,000, most of them women, who immigrate from different countries — notably Ethiopia. On June 5, Ethiopian domestic workers gathered in front of their country's consulate in Beirut, waiting to return home. Some left work after being paid in Lebanese pounds, which was inadequate to meet daily needs and made it impossible to send any money home to their families. Others left work who had not been paid in the past several months. Their status has become illegal and they need a speedy resolution from authorities.

The crisis in Lebanon has cast a shadow on all migrant workers, according to this BBC report.  In 2012, Stop Violence and Exploitation, a civil society organisation, published a study on the sponsorship system, calling for the end of exploitation of women migrant workers and an alternative system that provides legal protection and freedom to choose their workplace.

On May 28, blogger Reem al-Shammari posted a video on Snapchat, verbally attacking Egyptians working in Kuwait. She said:

Kuwait is for Kuwaitis, not for Egyptians. … You are hired. Understand … Egyptians are not partners with Kuwaitis in the homeland.

The video met widespread opposition from Kuwaiti citizens, but hate speech is still a growing phenomenon on social media sites, especially during the COVID-19 pandemic. Some of this hate speech has illogically linked migrant workers to the spread of COVID-19. However, moderate voices have defended migrant workers and their achievements as a result of their hard work.

Due to COVID-19, a sharp decline in oil prices has led Gulf countries to reassess their policies regarding migrant worker numbers — many companies have laid off thousands and started deporting those who work illegally.

On June 3, in a press interview, Kuwaiti Prime Minister Sheikh Sabah Khalid al-Hamad al-Sabah noted that 70 percent of the 4.8 million population was foreign, and said that this amount should be reduced to half in stages. He concluded that “we have a future challenge to address the demographic imbalance.”

In May 2020, in an episode of “We Are All Responsible,” presented on the official Saudi TV channel, the host, Khaled al-Aqili, said:

Unfortunately, the control of expatriate workers over the economy has become a real threat to national security and not only on the economic side but beyond much of that.

We ​​must stop making the Saudi employee a scapegoat with every crisis, and make the expatriate workers, who replaced Saudi workers — who are more efficient than them, the first to be dispensed of, not the sons of the homeland.

This was preceded by a ministerial decision issued on May 3, to regulate labour contracts during the COVID-19 pandemic.

Promoting discourse that directly targets foreign workers and portraying them as a national security threat definitely stirs up racist, hostile feelings. Justifying this sentiment only fans these flames.

Since the beginning of the COVID-19 crisis, press reports have confirmed the prevalence of the disease among migrant workers, due to a lack of protection and lack of social distancing. Most migrant workers live in crowded common areas and in densely populated commercial neighborhoods.

On April 10, a letter sent by a coalition of 16 nongovernmental organisations and trade unions to UAE Minister of Human Resources and Emiratisation Affairs Nasser bin Thani al-Hamli states:

On March 26, the Ministry of Human Resources and Emiratisation issued an arbitrary ministerial decree that allows private companies to amend migrant worker contracts, force them on unpaid leave, or to accept permanent or temporary salary reductions. This decision legally protects companies 100 percent — expatriate workers have no right to complain or resort to the courts.

Migrant workers in Qatar are not allowed to form unions. Many are exploited doing heavy work for long hours with low paying salaries. COVID-19 has revealed another chronic problem — a lack of health care and adequate housing. The drop in oil prices has led to the layoff of thousands of migrant workers, forcing many onto the streets.

In an April 15 statement, Amnesty International said that Qatari authorities had arrested and expelled dozens of foreign workers after informing them that they would be tested for COVID-19.

On May 23, 100 foreign workers demonstrated in Doha, to protest non-payment of their wages by Qatari authorities.

Local sources confirmed that migrant workers who work for World Cup 2020 suffer from widespread human rights violations, including low pay and long work hours under the harsh sun. They can not terminate their contracts or return home. A recent report issued by Amnesty International UK on June 10 confirmed these conditions and mentioned workers who have not been paid for seven consecutive months.

Bahrain also targets migrant workers. On June 5, Member of Parliament Ghazi al-Rahma announced that he and a number of deputies would present a proposal to amend the labour law in the private sector, favoring Bahraini citizens in the private-sector recruitment process and prioritizing terminations for foreign workers.

Gulf states must abolish the kafala system, ratify the International Convention on the Rights of Migrants and Members of their Families and allow equal civic rights for all migrant workers.