‘We are forgotten by the authorities’ 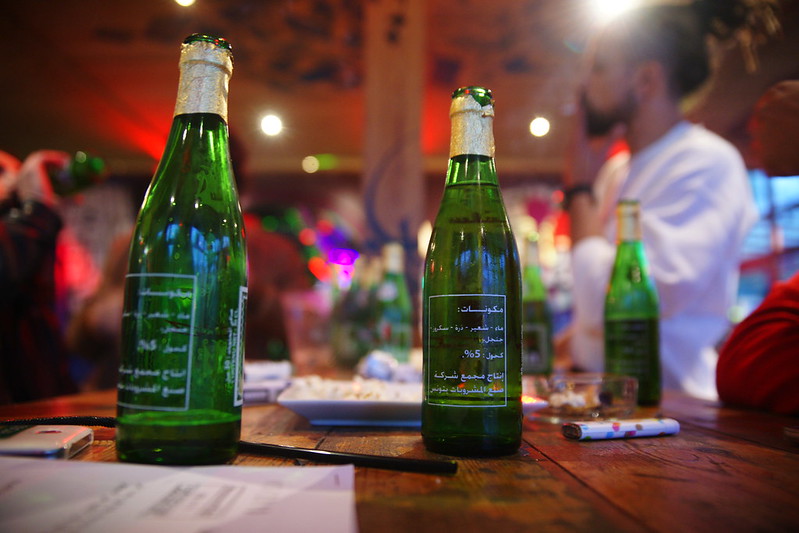 Photo of alcohol with inscription in Arabic. Photo by Ben Abdallah Abdel Karim on Flickr used under Licence CC-BY-NC-SA-2.0.

In May, young Tunisians looking for a buzz by drinking homemade alcohol ended in tragedy.

At least seven youth died and 56 were hospitalized for alcohol poisoning in Kairouan, an ancient Islamic center about 130 kilometers from Tunis, the capital, and one of the poorest governorates of Tunisia, where nearly 40 percent live below the poverty line.

A neighbor of one of the young people who died in a video uploaded on Facebook said:

Young people want to forget their situation. They don’t care about dying. In fact, they say sometimes they want to die. Look at their environment, at the poverty. We don’t even have roads; the water is dirty. We are not stupid, but we don’t have the means. We are forgotten by the authorities.

The parents of three brothers who died from the poisoning added:

My sons were unemployed. One of them was 37 and unable to get married and start his own life. We don’t even have toilets at home.

This is not the first time toxic homemade alcohol has killed young people in the Middle East. Alcohol and drug use is on the rise in the region, where young people who can’t afford locally produced or foreign imports opt to drink homemade, methanol brews —  strong concoctions mixed up by illicit dealers.

Methanol — used for industrial and automotive purposes — is a highly toxic and potentially deadly substance that can cause blindness, kidney failure and seizures and death if consumed in high quantities.

Islam prohibits the consumption of alcohol and many Arab countries ban or enforces strict regulations on its sale, but it’s still widely available, whether obtained underground or on shelves.

In Tunisia, the death of seven people after consuming adulterated alcohol caused turmoil. Beyond the tragedy, it is the precariousness of the population and the indifference of the state that are pointed out.

The thirst for cheap booze

The Middle East region has the largest youth population in the world, with more than half under the age of 25, but it also accounts for the highest unemployment rates reaching 27 percent in 2019. In 2011, youth-led protests — known as the “Arabic Spring” — erupted after years of frustration over social, economic, and political exclusion.

A 2019 report by the Brookings Institution argues that this delayed transition to the work market affects “other pathways to adulthood, including marriage, homeownership, and civic participation.”

Young men, traditionally seen as breadwinners for their families, are unable to fulfill their social obligations.

Within patriarchal societies in Egypt, Lebanon, Morocco, and Palestine, men  “face tremendous stress to be providers. Men are ashamed to face their families due to lack of money,” according to a BBC report on patriarchy in the Middle East.

Alcohol flows freely in restaurants, bars and shops in the Middle East — for those who can afford it. In Libya, for example, a bottle of Chivas Regal in 2014 was available for US$100 whereas a homemade Libyan brew was only US$15 a liter.

But in these conservative countries — where drinking is expensive and also a social taboo — it can turn into a grim and risky endeavor. Mohamed Cheik, a Tunisian activist, told Global Voices:

Homemade alcohol is widespread among idle young people, especially in poor remote areas. But it only makes the news when it ends in tragedy.

The Alexandria Faculty of Medicine in Egypt reported that 5 percent of monthly poisonings are related to alcohol, a figure likely lower than the true scale. Due to social stigma, shame and fear, many methanol consumers do not go to hospitals for treatment unless they are in critical condition.

Taboo: Caught between tradition and modernity

Alcohol is widely available in the Middle East, but it remains a taboo with negative associations and connotations. Young people in these countries often struggle to balance traditional Islamic values with the desire to live a liberal, globalized lifestyle.

Tunisia has a contentious relationship with alcohol, where consumption rose sharply from 20 to 30 percent since the 2011 revolution. And yet, a survey, conducted by the Pew Research Center in 2013 affirmed that 82 percent of Tunisians disapprove of the consumption of alcoholic beverages.

We are like schizophrenics. We drink and enjoy drinking while at the same time thinking it is bad and we should not be drinking. I can’t drink in front of my family and society. They would think I am a bad guy and lose my respected social status

In the Middle East, commercial alcohol sales are largely restricted on religious grounds. In Tunisia, since the 1990s, for example, shopkeepers can not sell alcohol on Friday, an Islamic prayer day, or during the holy month of Ramadan and religious holidays — except in bars and hotels. In some countries like Libya, Saudi Arabia, Kuwait, Sudan and Iraq, alcohol is completely banned.

In Yemen, the law is more ambiguous: it’s officially dry, but alcohol can be consumed on private property and sold to foreigners in hotels and nightclubs in Sana’a and Aden. These restrictions leave ample room for smugglers in a black market to flourish.

In Kairouan, Tunisia, no shops are authorized to sell alcohol, but young people can choose from over 100 shops that sell methanol.

There have been several alcohol poisonings in the region. The deadliest was in 2013 in Libya, when 101 people died and 1066 were poisoned, with dozens suffering irreversible brain damage or blindness, after drinking methanol-filled homemade brew. After this tragic incident, the government attempted to crack down on alcohol dealers. But this kind of repression alone does not stop young people from drinking.

“The government should legalize alcohol because Libyans will keep drinking anyway and at least legalizing it will ensure that what they drink is safe,” said Mohammed, a small-batch homebrew producer who spoke in 2014 with The World, a US-based radio program.

When large-scale alcohol poisoning outbreaks occur, they make the news. But the political will to tackle this sensitive and controversial issue remains silent in comparison.

This issue affects mostly deprived youth often forgotten by authorities. For youth to thrive in the Middle East, governments can restore a sense of purpose and hope in the future by creating more opportunities.