After his death, Leung’s yellow raincoat became a protest symbol 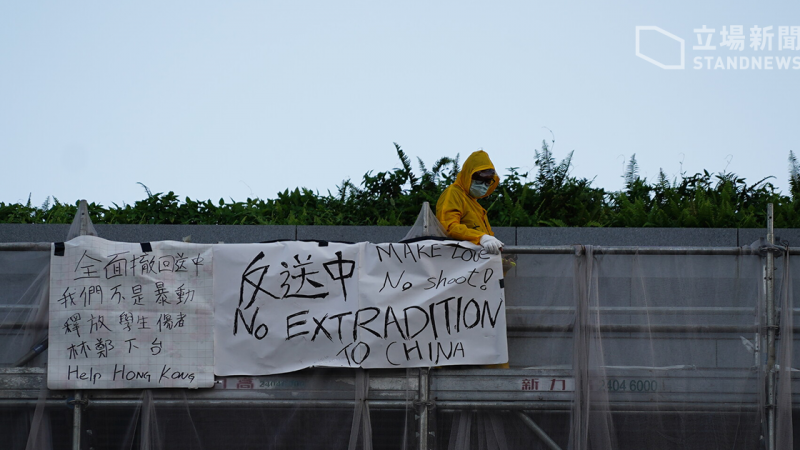 Supporters of the anti-China extradition movement in Hong Kong count around a dozen unnatural deaths related to last year's protests.

The majority of the deceased committed suicide — at least six individuals left suicide notes expressing their support of the protests and frustration towards the government.

The most shocking incidents were the deaths of Marco Leung Ling-kit on June 15 and Chow Tsz-lok on November 3.

Marco Leung, 35, was the first to die during the protests.

He fell from Pacific Place, a shopping mall, while he was hanging up a protest banner at 4 PM on June 15, a week after a one million-strong demonstration failed to convince the city's leadership to withdraw the bill.

On the banner he wrote:

Complete withdrawal of the China-extradition bill. We are not rioters. Release the students and the injured. Step down Carrie Lam. Help Hong Kong. No Extradition to China. Make Love, No shoot!

In response, on June 12, thousands of protesters charged towards the Legislative Council (LegCo).

Riot police cracked down on the protest with tear gas and rubber bullet rounds. Authorities labeled the protests as riots, a definition that left the protesters facing sentences of up to ten years in jail.

Marco Leung's individual protest was a reaction to the government's refusal to listen to people's demands and its labelling of citizens as rioters.

He fell to his death after a rescue team launched an attempt to pull him inside the shopping mall. Leung's death shocked all of Hong Kong.

The following day, two million people took to the streets, calling for Carrie Lam to step down as leader along with five other demands reflected in Leung's last stand: Complete withdrawal of the China extradition bill! Stop labeling protests as riots! Drop charges against protesters! Conduct independent investigations into excessive use of police force! Implement universal suffrage for both Legislative Council and the Chief Executive!

Since his death, Leung’s yellow raincoat has become a protest symbol, while protesters have vowed that they will carry on his path and force the fulfilment of his demands.

It had been a year since you left us. I remeber that you were the first person who say Five Demand. Hong Kongers never forget. 梁凌杰義士，他是被政權推下去。 未能忘記，亦不會忘記. pic.twitter.com/9E71RUM4th

It has been a year since you left us. I remember that you were the first person who said the Five Demands. Hong Kongers never forget. Marco Leung Ling-kit, a fighter for justice, he was pushed to fall by the regime. I can’t forget and will never forget.

Another protester, Chow Tsz-Lok, 22, fell from a car park during a riot police operation around midnight on November 8, 2019.

The death was suspicious as Chow was sending out text messages to fellow protesters, containing information about the whereabouts of riot police at the time of his death.

Moreover, he only fell from the third level to the second level of the car park — just a few meters in height. Many believe that he was murdered.

The Coroner’s Court is still yet to launch inquiries into the causes and circumstances of both Leung and Chow’s deaths.

Leung’s father told journalists that Hong Kong police has delayed handing over the investigative report to the court.

Ahead of the anniversary of Marco Leung’s tragic fall, Civil Human Rights Front, a coalition of local non-governmental organizations, urged citizens to commemorate Leung by putting flowers outside the Pacific Place shopping mall.

Thousands answered the call, despite the heavy presence of riot police.

We shall never forget! https://t.co/xGfGZCji2Y

Eventually, the queue grew to such a size that people had to wait for two hours to place the flowers outside the shopping mall.

#hk – the queue to pay tribute to deceased protester Leung Ling-kit extending all the way from Pacific Place to Hong Kong Park pic.twitter.com/nbQdL4tazA

The crowds outside the mall continued into the early hours of June 16, while pro-democracy district councillors set up temporary memorials in other parts of the city to allow local residents to pay their tributes.