How can Nepal's literary tradition make its mark on the global scene? 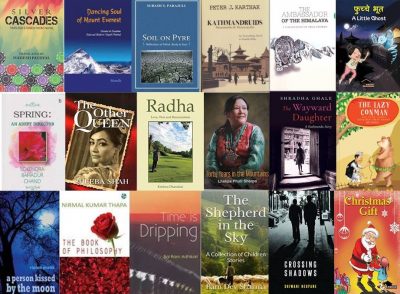 Some of the Nepali books featured during Nepali Literature Month at GLLI. Image by the author.

The author of this story was a guest editor at GLLI during the Nepali Literature Month.

Despite its rich publishing history, Nepal's literary tradition is still relatively unknown to international readers. While Nepali author Laxmi Prasad Devkota began the tradition of writing and translating in English during the 20th century, this trend did not continue for long and it is only in the past two to three decades that the number of Nepali books being written in English is slowly growing. However, according to translator and researcher Mahesh Poudel, Nepali literature is still largely excluded from literary publications focussed on the region and it rarely appears in major international anthologies and journals. There are many publications awaiting translation and popular Nepali authors’ books are not the exception. The expense of translation and royalties, as well as the lack of collaboration between national and international publishing houses are among the major challenges, according to publisher Bhupendra Khadka.

Karen Van Drie (KVD): English-language cultures are not as open to translated literature as we should be. Our countries are so physically big that it is hard for us as readers to keep up with the output of our own publishing, let alone works from other cultures. This is the wrong attitude to take though, as there is so much from other nations we could learn. Currently, only 3% of what is published in the United States every year has been translated from another language.

But there are two signs beyond literature that shows the situation could improve. A foreign film called Parasite, from South Korea, was chosen as Best Picture of the Year at the Oscars this year for the first time ever. Also, Netflix is stocking its content library with selections from around the world. And, the third promising sign is that there are new publishing houses starting to publish translated literature.

All of these trends could make the English-language reader more willing to try titles from faraway cultures. 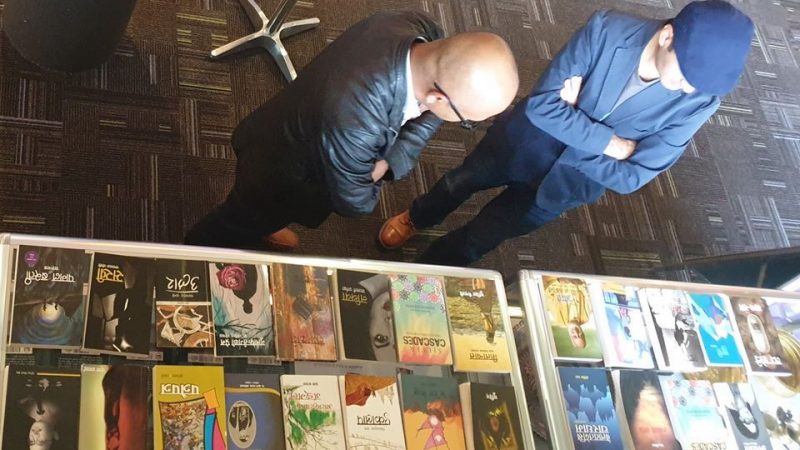 Nepali literature being displayed during the ‘Nepal Yatra’ exhibition in 2019 at the Hawth Theatre, United Kingdom. Photo by the author.

Anytime someone requests information about Nepal before they come, do they also get information about locally-written literature? Does everyone involved in international tourism in Nepal have three home-grown titles they would recommend to foreign visitors as good reads? Are literature advocates in Nepal asking their worldwide Embassies to feature authors on their Facebook feeds, for example? Also, submitting Nepalese titles to book prize contests is a wonderful way to let someone else do your publicity if a book is a winner.

What I noticed is that Nepali titles were not available to buy immediately as an e-book. When someone reads a review of a title, that is when they are most inspired to purchase a book. That book needs to be available electronically immediately.

The second thing I would add is that when people are looking to specifically seek out books about Nepal, they are first likely to see books written on your biggest issues by foreign writers, not Nepalese writers. They are judging a book by its book cover; make it as competitive and compelling as possible. Make sure the most compelling events and issues in Nepal have home-grown writers writing about them.

GV: You have decades of experience bringing global literature to libraries. How can Nepali publishers find ways to reach global libraries?

KVD: 1) Invest, as a nation, in fantastic translation skills. Translators are non-stop advocates for authors.

2) Have a literary festival that showcases the books and the nation. I think you already do that.

3) An add-on at the literary festival could be a fellowship program for publishers interested in your nation's creative output. Bring them in for three days, at their own travel expense, to meet and greet publishers and learn about the writers and illustrators from Nepal. Get them excited to publish your books in their own language.

4) What English-language markets have an affinity for Nepal? For example, in the US state of Colorado, a fun thing people do is set a goal to hike every mountain in the state over 14,000 feet tall. There are 54 of them. I imagine Coloradans would be quite taken with all things Nepalese. How could you target these markets specifically?

5) Don't underestimate the power of your cuisine to get people around the world interested in your literature. Cookbooks related to Nepalese cuisine and a natural advocate for your cuisine able to cook and market the books in English are an exciting entry point to learning about the culture.