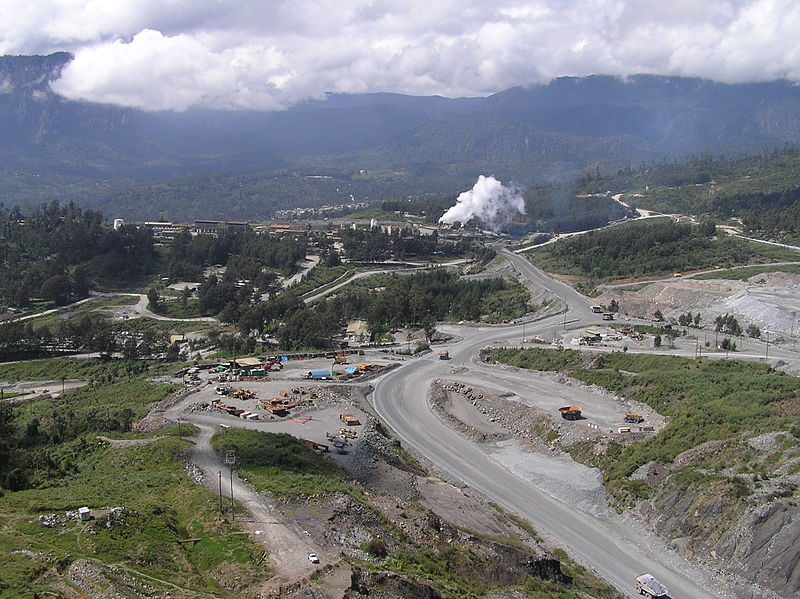 Porgera gold mine. Photo [2] by Richard Farbelini from Wikipedia licensed under public domain.

In an unexpected move, Papua New Guinea (PNG) Prime Minister James Marape announced [3] on April 24 that one of the largest gold mines of his country will not see its mining lease renewed. This decision has launched a intense debate about the future of the mining industry, a key pillar of the PNG economy [4].

Marape's decision has ignited an intense discussion [5] PNG: the Porgera mine site which will see its license end is a major and international investment in the country. The site is is managed by Barrick Niugini Limited (BNL), a joint venture between Canada-based Barrick Gold, Chinese firm Zijin Mining, the Enga’s provincial government, and Porgera landowners.

The Porgera site started operating in 1990. It is an open-pit and underground mine which produces a million ounces of gold a year, and employs more than 5,000 people. The mining operation has boosted local revenues but it also drew local complaints about its negative impact on the environment. Human rights violations were also reported [6] in communities surrounding the mine. Marape cited environment and resettlement issues to support his announcement to close the mine.

BNL’s lease expired on August 18, 2019. There were negotiations about extending the lease for another 20 years but in the end, Marape decided to reject the application, surprising key players in the mining industry. Yet Marape, who ran on a ‘Take Back PNG’ election campaign in 2019, had announced that if elected [7], he would seek to get a bigger revenue share from the operations of multinational companies in the extractive industry.

Marape wrote [8] on Facebook on April 27 to assure his constituents that “the world will not end if Porgera closes.” He also asked Barrick Niugini Limited to work with his government in implementing a transition phase and exit plan:

Now that your lease has expired, the legal process is there for Barrick to comply so you can maintain your operation until an agreed exit time we both secure at negotiations when mutual obligations are retired.

My letter will ask Barrick to continue operating the mine when we go through this phase, but if you sabotage or close the mine, you leave me no choice but to invoke orders to take over the mine for the sake of land owners and provincial government who should be getting bigger equities, plus the employees and contractors who are presently working with the mine.

In a subsequent Facebook post on April 29, he reminded [9] local stakeholders that the government has a plan for them:

To all staff at Porgera that is laid off at this time, we are working to restore you all back to work at the earliest. Hang in there!

Your loss of income will be compensated and none of you will lose your job and you will be back working when the mine is opened.

To all contractors of Porgera, you will still be required.

To all land owners of Porgera, this is your moment! You will sit on the table as greater free equity owners.

BNL described [10] Marape’s decision as “tantamount to nationalisation without due process.” The company added that Marape’s government has failed to consult local landowners:

The Government has also ignored the wishes of the Porgera landowners, who overwhelmingly support the extension of BNL’s lease, and the Prime Minister has refused to consult them or even hear their views.

A group of landowners criticized [11] the non-renewal of the lease and warned about its disastrous impact on the local economy:

The ill-conceived decision not to extend the Porgera Mining Lease, and the resulting economic chaos that has brought to our people is causing us much pain, but the Government has never come to us to ask our views or to explain why they are making these decisions that affect us so much.

We already suffer from an uncertain future as our peoples’ livelihoods are impacted by the Covid-19 pandemic and the suspension of mining operations at Porgera after an ill-conceived decision by the government over the refusal of SML [Special Mining Lease] extension without consulting the landowners.

Landowners are challenging this decision too. They have already negotiated with Barrick and want them to stay They’re claiming #PNG [12] gov not even listening to them? https://t.co/t2bHqm9dum [13] pic.twitter.com/qN0xU1DEX3 [14]

Can PNG make the shift to sustainable development?

The underlying issue for PNG is to what extend it can control its model of economic development. Public opinion, though, remains divided over the question: some landowners saw [16] the wisdom of what Marape did and its potential to develop a better development model for the country. An editorial published [17] by Post-Courier newspaper urged the government to manage the country’s resources well and pursue programs aimed at establishing a self-reliant economy.

But there are also other views: a writer cautioned [18] Marape not to act like a dictator in a democracy where rule of law is supposed to be upheld. BNL has since filed a court petition questioning the action of the PNG government.

While a PNG journalist has appealed for dialogue [19] to resolve the issues related to the lease, it is unclear if both sides are ready for negotiations: On May 29, BNL announced that it is ready to increase [20] the stake of local landowners in the Porgera lease, yet on June 5, PNG’s Mineral Resources Authority accused [21] BNL of attempting to illegally export gold to Australia, an act denied by the company. On the same week, BNL said it received a court notice that there will be a judicial review [22] of the non-renewal of the lease scheduled on July 20.

Finally, on June 10, the country’s parliament has passed [23] an amending law that would increase the government share in extracting the country’s oil, gas, and mining resources. Marape thanked the parliament for the law. He wrote a message addressed [24] to investors on his Facebook page:

I can assure our investors that we know they must make money for their shareholders too so we will not be greedy but we just asking for a fair share, if they want to harvest our resources.

The Porgera mine lease issue has rekindled previous debates about what constitutes a fair deal in allowing companies to extract the country’s finite resources. This will remain a contentious issue but whatever action the government will carry out is going to have a lasting impact on the country’s economic future.