Afghan migrants continue to die in the hands of Iranian authorities 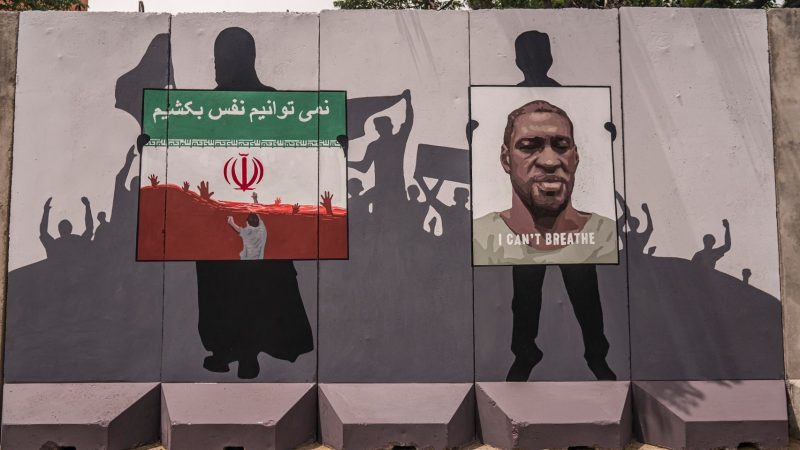 Afghan artists paint George Floyd and a sign of “We cannot breath” with Iran Flag to demonstrate the brutality of Iran police toward Afghans. Photo credit Omaid Sharifi, via Twitter, used with permission.

While the world continues to protest over the death of George Floyd in the US, and to denounce racism and discrimination, Afghans are leading their own fight against a similar issue: the way Afghan migrants are mistreated in Iran as they attempt to reach Europe through that country.

In one recent episode of the many atrocities experienced by Afghan migrants, Iranian police opened fire in May on a civilian vehicle that was carrying 13 Afghan migrants in the Yazd province of central Iran. As a result of the shooting, three migrants were burned alive in the car, and four were severely wounded.The footage of the car in flames went viral on social media, causing outrage. As one Afghan twitter user wrote:

Such a disgrace and shame that even in 21 century barbarism still ruling in ISLAMIC REPUBLIC OF IRAN, repeating ISLAMIC!#کمی_آب_بیار_که_سوختم https://t.co/SlkETMRAie

One migrant who was able to get out of the burning car was pleading “Bring me some water, I am burning.” The heartbreaking story caused a public outcry in Afghanistan and beyond.

Police fired on the vehicle, suspected of carrying drugs and undocumented migrants, after it crashed through a checkpoint, Ahmad Tarahomi, deputy Yazd governor, told state media. After its tyres were hit, the vehicle continued to drive away on its wheel rims, igniting sparks which started the fire, Tarahomi said.

I add my voice to the chorus of Afghans who have denounced the recent killing of Afghan refugees at the hands of Iranian police in Central Yazd province. It is shocking and unforgivable, and as an Afghan and refugee advocate, I am heartbroken. The image of that burning car and the screaming, half-burnt boy is searing.

Many Iranian officials have used the death of George Floyd as a propaganda tool against the U.S., but they have themselves failed to address the systematic mistreatment of Afghan refugees in Iran, as Afghan comedian Musa Zafar points in his tweet:

George Floyd was seen burning inside this car.

Following the outcry in Afghanistan, the Afghan ambassador to Iran visited a hospital in Iran where the Afghan migrant who escaped the burning car is treated. The ambassador greeted the man who is handcuff in the hospital bed.

This is so inhumane that words can’t describe:
Iranian police burned a vehicle carrying refugees—alive.
The one who survived was handcuffed at the hospital so that he can’t even wipe his tears.
The other day @JZarif was lecturing the US about racism.

Prior to this incident of the burning car, more than 50 Afghans were arrested while crossing Afghanistan’s western border to Iran in May 2020. The Iranian border police tortured them and forced them to jump into the river that flowed from Afghanistan to Iran. As many as 23 drowned, 15 went missing and only 21 of them survived.

Afghan activists on Sunday threw colors at the gates of the Iranian embassy in Kabul to protest against the shooting of a car carrying Afghan migrants in Yazd, #Iran, and the drowning of Afghan migrants in Harirud River.#کمی_آب_بیار_که_سوختم https://t.co/ol7FtEaPcA pic.twitter.com/uOnrPI2xm8

Iran denies that the border police tortured and had Afghan migrants drown. But the credibility of Iranian authorities deserves scrutiny: in January 2020, the Iran revolution guards shot down a passenger airline during a dispute with the U.S. in the region. Iran initially denied that they used a cruise missile for targeting an airline that killed as many as 176 people in the air, but eventually admitted doing so.

An investigation by the Afghanistan Independent Human Rights Commission indeed confirmed that the Iran police border tortured and killed migrants at the border.

On May 14, the Afghan government and the Iran government set up a commission to investigate the drowning of Afghan migrants into the river. The commission has yet to release its findings, though Iran still denies any wrongdoing.

2/x
The experience of refugees show that in most cases d Iranian public have gone far beyond helpless enablers & collaborators, making life a hell for #Afghans at schools, in d neighborhood, at d workplace.
Where is all that long brandished culture & civility? #کمی_آب_بیار_سوختم https://t.co/pd6py9tmO7

While millions of Afghans have found refuge in Iran since the war broke out in the 1980s, they are also mistreated by Iranian authorities, as the recent tragic incidents demonstrate. Often working as daily laborers, Afghans are denied education and other basic services.

When COVID-19 hit Iran in February 2020, the Iranian health authorities refused to treat Afghan migrants who work in Iran. As a result, hundreds of thousands of migrants had to pack their bags, and returned to Afghanistan, infecting their birthplace that has very weak health structures to fight the pandemic.