These officials flouted lockdown rules in Myanmar, Malaysia, and the Philippines

Arrest a community volunteer, then throw yourself a party 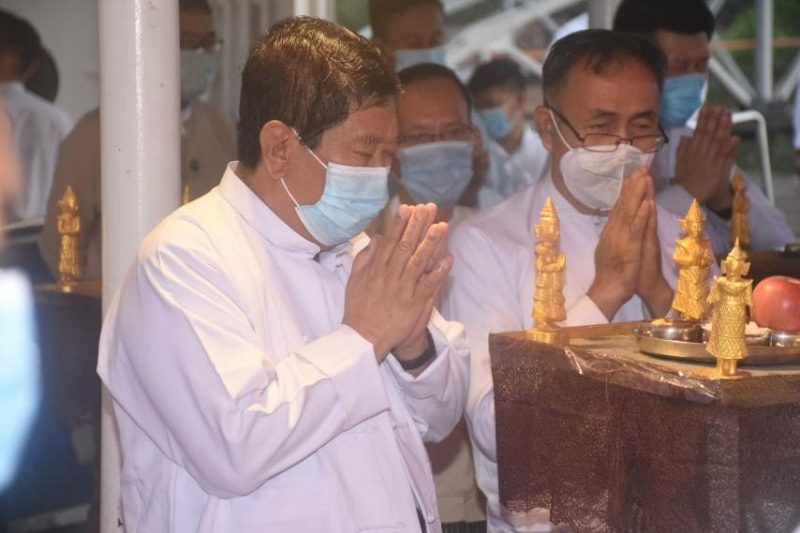 Yangon City official attending a religious activity that sparked public criticism over the apparent violation of government prohibition on mass gatherings and religious festivals during the pandemic. Photo from the Facebook page of Yangon Region government.

Lockdown restrictions were enforced by many countries across the world to contain the spread of COVID-19, and Southeast Asia has hosted some of the harshest.

Most quarantine protocols require residents to stay at home, while mass gatherings are typically prohibited.

In Malaysia and the Philippines a particularly strict enforcement of these measures saw thousands of arrests and heavy penalties for violations from March onwards.

But a number of government officials were caught violating the very quarantine protocols they were supposed to oversee.

Global Voices looked into some of these cases, and their outcomes, which highlight how rules apply to ordinary citizens more than to powerful politicians.

We also considered a case in Myanmar that showed how religious discrimination can have a bearing on the application of the law.

Malaysia has arrested almost 30,000 people for violating its Movement Control Order (MCO). Harsh implementation was cited by authorities as necessary to prevent a surge in COVID-19 cases.

But the public noticed that several politicians flouted the guidelines. The Centre For Independent Journalism compiled documented many of these instances. In one case, Deputy Health Minister Noor Azmi Ghazali posted a now-deleted Facebook photograph of him and another elected representative sharing a meal with about 30 students. Deputy Rural Development Minister Datuk Abdul Rahman Mohamad meanwhile enjoyed an impromptu birthday party. Datuk Abdul Rahman Mohamad claimed that the party was a surprise sprung on him by friends and said he was unable to send them away for reasons of courtesy.

In many cases politicians and their families who got charged for failing to practice social distancing measures were slapped with light fines. Ordinary citizens, in contrast got maximum penalty fines and even jail time.

This prompted the Malaysian Bar to issue a statement about the ‘disparity in sentencing’:

The Malaysian Bar is disturbed by accounts of excessive sentences and cases of disparity in sentencing between ordinary people and those with influence, in relation to persons who have violated the MCO.

We acknowledge that the range of sentences handed down may well be within the ambit of the law, but the power of the Court to hand down sentences must be exercised judiciously in order to avoid any travesty of justice.

Philippines: ‘Mañanita’, not a birthday party’

The Philippines is cited by the U.N. Human Rights Office as another country that relied on a “highly militarized response” to deal with the pandemic. More than 120,000 people have been arrested for curfew and quarantine transgressions. Checkpoint security measures have led to numerous human rights violations.

But the government's credibility in enforcing the Enhanced Community Quarantine (ECQ) guidelines suffered a tremendous blow after it was reported that Major General Debold Sinas, the director of the National Capital Region Police Office, benefited from a birthday bash organized by subordinates.

Sinas insisted that there was no birthday party but only a ‘Mañanita’ — a police tradition that features an early morning serenade for the chief. But the public backlash forced him to issue an apology.

Critics pointed out that Sinas and his team have enthusiastically arrested activists and community workers organizing relief activities during the lockdown. They blasted the general for holding festivities at a time when millions have lost jobs and income due to anti-pandemic measures.

Sinas was later charged for violating ECQ rules but has so far managed to retain his position. His case is still pending in the court.

Your apology would take on greater meaning if you step down from your position. Accept that you made a poor judgment call, showing insensitivity to the plight of our less fortunate. Don’t wait for higher authorities to decide your case.

In Myanmar, Yangon Chief Minister Phyo Min Thein and Naing Ngan Lin, chairman of the COVID-19 Control and Emergency Response Committee, are both accused of breaking the law by attending a Botataung Pagoda festival while the country is observing a ban on religious gatherings.

Photos uploaded on the chief minister's Facebook page showed dozens of individuals congregating at a riverside site to observe a Buddhist rite.

Social media reactions focused on the clear breach of government guidelines, which include a prohibition on gatherings of four or more people.

Phyo Min Thein denied that the activity was a ceremony, insisting instead that it was a pagoda renovation and that the other people in the photographs were mere onlookers.

Many commented that while the government has been consistent in jailing Muslims and Christians for holding religious activities during lockdown restrictions, it has been less decisive in probing activities connected to Buddhism — the country's most widely observed religion.

Whatever the case, the chief minister’s actions were unacceptable. They have put the Union government in an awkward position, as its orders have been undermined by a senior official. Due to U Phyo Min Thein’s shortsightedness, Myanmar will have to pay the price internationally by being accused of religious discrimination.

Phyo Min Thein may yet pay for his lockdown scandal — a growing number of Yangon regional legislators are seeking to file an impeachment case against him for breaking the rules.