The magic of paper and ink: A conversation with Iranian-American artist Hadieh Shafie

Born in Iran and raised in the United States, Hadieh Shafie is fascinated with reimagining the book form. She is also interested in drawing textual forms and exploring the emotive power of color, as well as “looking at new modes of collapsing the space between what is drawing and sculpture.”

Shafie's works have been collected by New York’s Metropolitan Museum of Art and the Brooklyn Museum of Art, among others. In October 2019, her work “Transition 7″ was included in Christie's Middle Eastern Modern & Contemporary Art auction

Shafie’s paper-based work is expressive and labor-intensive. It invites the audience to a world that is imaginary but at the same time orderly and logical—a world of layers, where, with each visit, the audience becomes acquainted with a part of her worldview, technique and conceptual complexity and the magic of paper and ink. It's a journey that seems to have no end.  Her use of words and phrases are different from Persian or Arabic calligraphy; it's more like a gateway to an unresolved nostalgia, a place where the artist searches for her memories and identity in a peaceful and harmonic world.

In an interview with Global Voices, Hadieh Shafie spoke about her technique, creative process, and her connections to Iran. Excerpts from the interview follow: 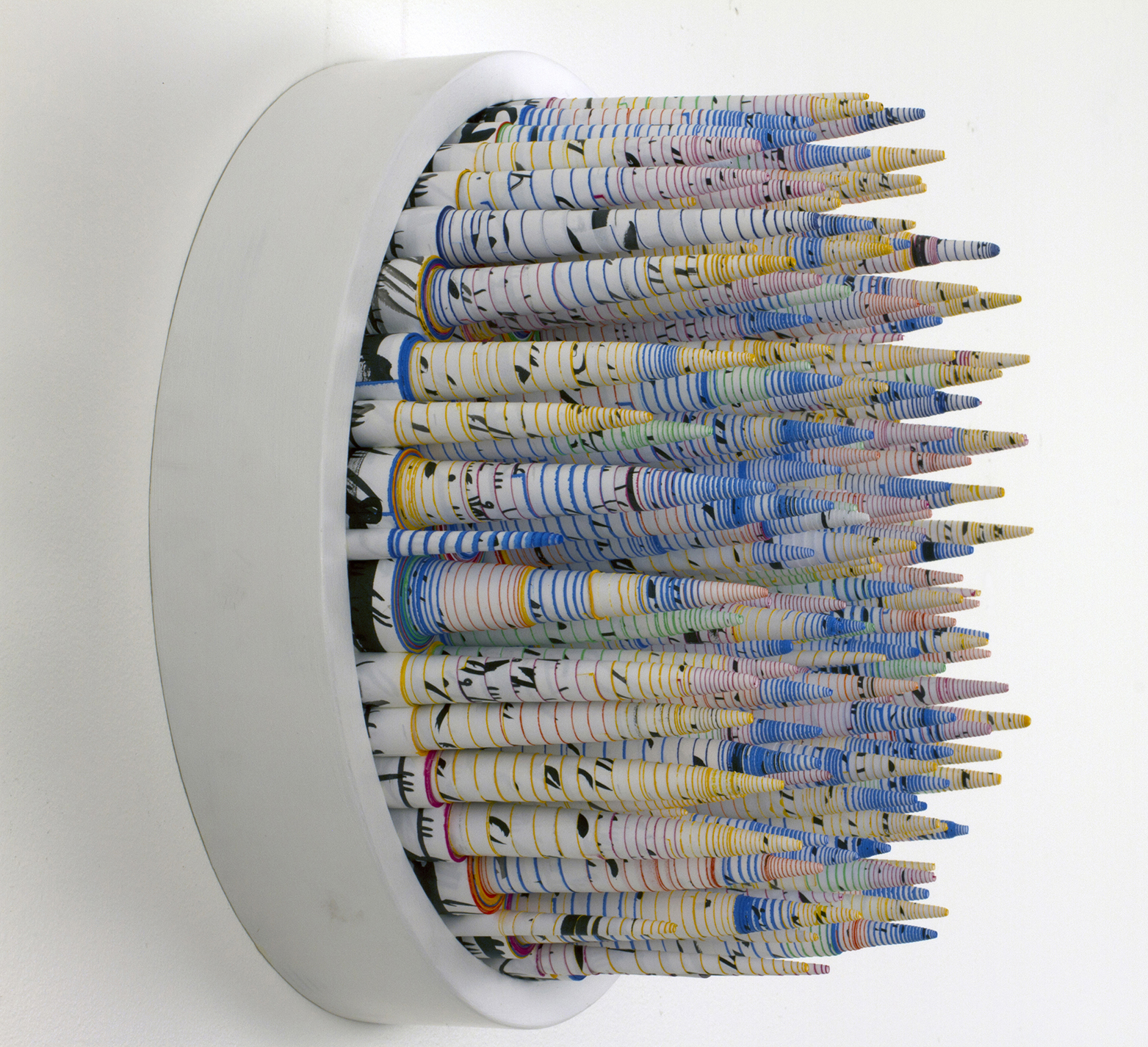 Omid Memarian: One of the dominant and recognizable types of artwork you have made includes colored rolls and stacks of paper. What was the thought process involved in making those?

Hadieh Shafie: My medium is paper. I like to rethink the ideas around drawing, painting and sculpture.

While focused on painting, I took paper-making and printmaking courses in undergraduate and enjoyed both processes. I liked how paint and ink would absorb into paper. When I moved to Brooklyn to attend the MFA program at Pratt in the winter of 1993, I was faced with serious financial constraints. At the time, since I had already found working on paper rewarding, I made the decision to work entirely with paper and drawing as I also thought it would be economical. At the same time, I was very interested in illuminated manuscripts and so it felt natural to explore the medium.

The paper scroll works came about from a series of works I was doing as an intervention performance in the early 2000’s, inspired by the children’s story “The Little Black Fish”.

In these performances, I would copy pages from the story, highlight and translate a sentence, then leave the page in a public space for someone to find.

I would leave them in books in public libraries, cafés and stores. I continued this exploration in my studio. I folded pages from the book into cracks of the floors and walls. I had a found table with a missing bolt that connected the leg to the tabletop. In order to get the pages of the book into that space, I had to roll the paper. When I did that, it was an “Aha” moment, and that is how the rolled paper works started. Later, a series of works based on these initial explorations were exhibited at School 33 Art Center in Baltimore in a juried exhibition by Allison Knowles, the renowned Fluxus artist. 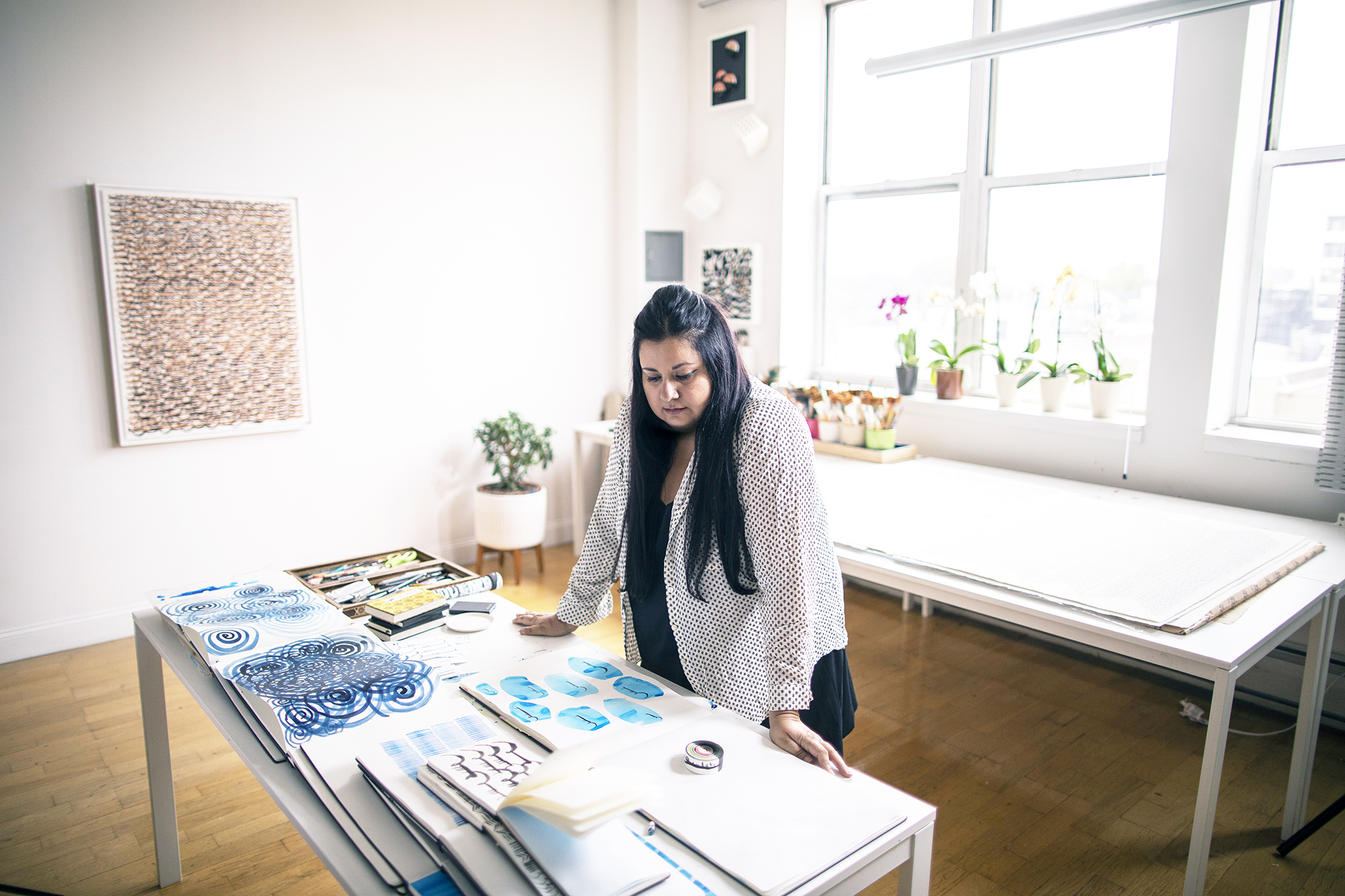 OM:  You use Persian words in many of your works, but not in the way we're familiar with from Persian or Arabic Caligraphy. It’s like the words carry a narrative attached to the paper. What’s your connection to words and in particular to “eshgh”, the Persian word for love?

HSH: I zeroed in on the word “eshgh”, because I felt it had lost its meaning. Drawing the form over and over again is a meditative performance. I have developed several series in my drawing practice. As of today, there is the “Grid Series”, which is ink on paper.

There is also the “Draw, Cut and Peel” series, which are ink and acrylic drawings of text and colors on museum board where the surface is scored, cut and then peeled to create a dimensional surface. And most recently the “Draw, Cut and Rotate” series, which is pencil on museum board with concentric circles that are finally rotated to create seismic lines and abstract the writing of the text.

In the paper roll series, I hide handwritten and printed text within the concentric rings of paper strips. I not only hide, but sometimes partially reveal, the interiority of the paper scroll works by pushing the circular forms out into spike forms that reveal what is contained within.

During the four years between 1979 and 1983, my main source of inspiration and refuge was making art and reading books. It was also during this time that I understood that some books that I had access to, like “The Little Black Fish” or books in translation like “Gone with the Wind”, were books that you did not take in public. It was then that books became precious objects. One of my favorite things to do was to lose myself in reading a book while eating lavashak or sour cherries on a daybed. So daydreaming about characters and storylines and holding books is rooted in me as moments of escape and happiness.

When I start a work I don’t always know what will be the final outcome. I do have a set of tools to play with, for example the word “eshgh” is one of these tools. Its meaning is profound in Farsi (revealed), but obscured in English (hidden). Other tools include a color palette or the form of a spike. OM: Many of your works are very labor-intensive. Your unique style of paper quilling, using thousands of colorful rolls of paper covered with handwritten calligraphy, create visually stunning pieces. Where does the energy, inspiration and creativity come from?

HSH: My work comes from deep within me. I naturally think in colors and abstract forms. My mode of working is fluid. I play with materials in the studio. I follow the experimentations and what I see happening and I develop them into a visual language.

The process for making the work takes time and energy, that is true, but it is only difficult when I have deadlines. But ever since I can remember I was making art and I loved to draw and paint. That’s all I ever wanted to do. It always felt so natural for me to think with abstraction. I find the process of being creative playful. To me that is joy.  Much of my work is me observing the things I see happening in the process of making a drawing or sculpture. I then create new works from those observations. My work is cohesive but always evolving. It became clear to me sometime in the late ’90s that there had to be joy in making work and so that is what I do—I make work that transforms sadness into joy. OM: You grew up in the States but still there is a strong and continuous connection and communication with your roots back in Iran. How have you incorporated this into your work?

HSH: In 1983, we left on a two-week vacation. Through a series of unexpected opportunities and without any planning, we found ourselves, as a family unit, intact and abroad.

It was a joy to know I had left Iran. But within a couple of years, I recognized the pain of leaving my motherland and not having said goodbye. We had left Iran with two suitcases. Everything was left in the house as you do when you leave for two weeks of holiday.

I was 10 years old in 1979 and the four years of life in Iran between 1979-1983 killed my childhood. Those four years provided so much joy flanked by sadness and despair that it will take a lifetime to recover from all the trauma those years offered. Today, I am certain that much of the unpacking of those experiences is happening through my artmaking.