'It is time for reflection in Ubuntu' 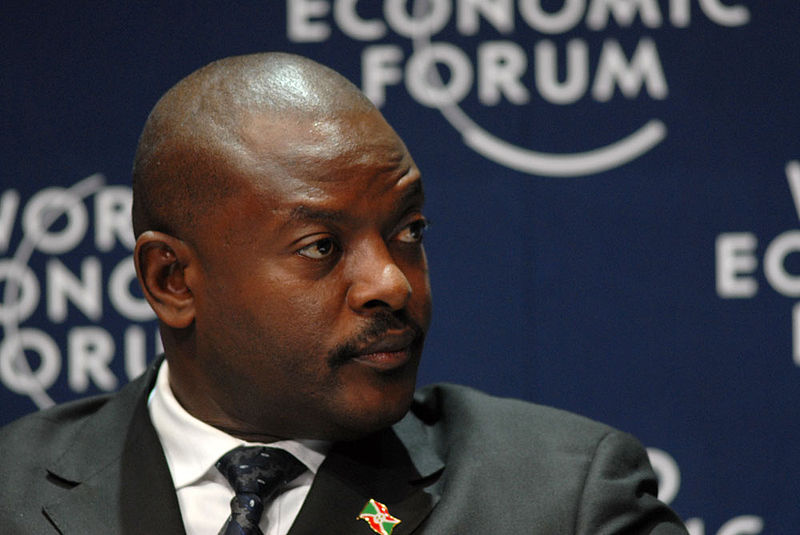 Pierre Nkurunziza, then the president of Burundi, captured during the Opening Plenary of the World Economic Forum on Africa 2008 in Cape Town, South Africa, June 4, 2008, Flickr via CC BY-NC-SA 2.0.

Burundi’s government announced on Tuesday, June 9, that President Pierre Nkurunziza died on Monday, June 8, after 15 years in power and a recent election confirming his successor.

He took ill on Saturday after watching a volleyball match and his condition improved on Sunday, but then surprisingly deteriorated on Monday while at Cinquantenaire Hospital in Karusi. National mourning of seven days was decreed.

Born in 1964, Nkurunziza lost his father as a young man to anti-Hutu violence. He then studied physical education and became a teacher. In 1995 he joined the rebellion with the National Council for the Defense of Democracy–Forces for the Defense of Democracy (CNDD-FDD) — after escaping an attack himself — and went on to rise through the ranks, eventually becoming president in 2005, with the end of the war and CNDD-FDD becoming a political party.

He was very religious and often said he had been chosen by God for this role.

Burundi saw some peacetime gains in terms of political and economic stability, with measures such as free health care for infants. The CNDD-FDD, ex-rebel group turned party, though, gradually dominated power in an authoritarian way, which intensified particularly after Nkurunziza's controversial election in 2015 to a third term.

The CNDD-FDD violently excluded opposition and media voices and cut ties with foreign governments and international organizations. Many opponents and moderate members of CNDD-FDD left the country.

The Imbonerakure — the party’s youth wing — became powerful and has often been accused of armed violence and coercion.

There is an ongoing International Criminal Court investigation into alleged crimes against humanity committed in Burundi. With the constitutional changes begun in 2018, which strengthened presidential power, critics argued his government was leaving behind the Arusha Accords which facilitated the end of the war.

The government announced Nkurunziza's death from heart attack complications, but many suspect that he was ill with COVID-19. His wife was hospitalized with it, and RFI reported that doctors spoke of COVID-19 symptoms when he was first hospitalized — and a ventilator was transported to the hospital.

His wife, Denise Bucumi Nkurunziza, was reportedly evacuated to a Nairobi, Kenya, hospital, with COVID-19 symptoms, late on May 27. There was little official communication on this, although she sent an audio message to her church on June 5 saying she was well, and then returned on June 9.

Medical staff expressed alarm recently by the rise in cases with COVID-19 symptoms. The lack of testing capacity, though, means the situation is suspected to be worse than reported — only 83 cases registered — with authorities downplaying the pandemic and even expelling World Health Organization agents, likely wanting to avoid admitting a lack of health care capacity and to avoid postponing the recent elections.

Olucome, a nongovernmental organization, called for more vigilance, referencing large crowds at rallies during the electoral campaign. Meanwhile, the government said that Burundi was protected by God. There were also cases reported inside Ngozi prison with COVID-19-like symptoms in early June.

The health minister was reportedly hospitalized with COVID-19 symptoms following the elections and spent some days in a Kenyan hospital, before returning.

The recent election was marked by harassment of opponents and a lack of observers. An appeal was submitted by opposition, alleging irregularities. Surprisingly, on May 28, the Independent National Electoral Commission president, Pierre Claver Kasihize, announced the withdrawal of the results it had publicly announced, saying they were just a draft which should not have been published.

The election results were later confirmed officially, though, by the Constitutional Court. The ruling party and its candidate, Évariste Ndayishimiye, won the presidential and legislative elections with 68.7 percent and 68 percent respectively.

Nkurunziza’s unexpected death changes things for the new president’s term. It was predicted that Nkurunziza’s influence would hang over him — Nkurunziza was given the title Supreme Guide of Patriotism — balanced with the influence of the powerful council of generals within the party.

This has now changed as Ndayishimiye will not have Nkurunziza’s influence to balance. However, the council of generals remains — who supported his candidacy — and who also have a military-rebel background.

Who rules Burundi since yesterday?
Pascal Nyabenda or Gaston Sindimwo and the government according to the constitution?
Are we heading to a rushed inauguration of Evariste Ndayishimiye?
The government’s communiqué is surprisingly quiet about the subject.

Analyst Thierry Vircoulon argued that the CNDD-FDD party government and its systems of patronage remain in place, with the powerful council of generals, and therefore, overall, little structural change is to be expected.

The new president, in his new seven-year term, faces challenges ranging from increased poverty and the pandemic to tense diplomatic relations and the several hundred thousand Burundians still living as refugees.

Nkurunziza would have remained in office until August 20 and the new president's inauguration.

RFI said that according to the constitution, it would be Pascal Nyabenda, National Assembly president, who would then be interim president; he was reportedly Nkurunziza’s preferred choice for successor before accepting Ndayishimiye.

Ndayishimiye's inauguration could be brought forward to reduce uncertainty.

In this unusual moment, SOS Medias Burundi reported the streets were calm in the former capital, Bujumbura. In Gitega,  made the political capital in 2019 by Nkurunziza’s government, things were even calmer than usual, with people waiting to see what happens next.

Tributes to him were broadcast on TV.

Condolences came from various governments, including Democratic Republic of Congo and Rwanda, a nation considered an “enemy” by Nkurunziza's administration due to tense relations.

The first vice-president of the Republic and Union for National Progress Party's (UPRONA) presidential candidate, Gaston SIndimwo, gave his condolences, as did the main opposition National Freedom Congress party, or CNL.

Meanwhile, reactions from Burundians reflect the divisions arising from his presidency:

In this week of national mourning, the blogger Painette Niyongere gives homage to president Pierre Nkurunziza, who has left us, with some good memories that she keeps of him.

As I learn of the passing of Pierre Nkurunziza, I think of the thousands of lives that his regime cut short. The families that won't see justice.

Antoine Kaburahe, founder of Iwacu newspaper, which has suffered harassment from authorities in recent years, wrote that Nkurunziza's death marks a “time for reflection in Ubuntu,” a southern African philosophy that emphasizes the interconnectedness of humanity. Kaburahe currently lives in exile and recently, four Iwacu journalists were jailed and their appeal rejected.

Following the president’s death, contested elections, and long-term problems of economic exclusion and political violence and exile — there is much to reflect on.