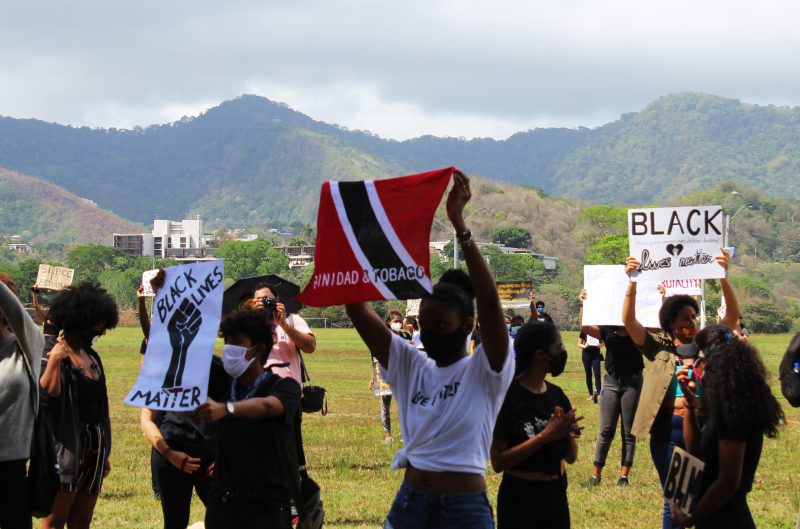 Protestors at the Black Lives Matter protest in Port of Spain, Trinidad, June 8, 2020. Photo by Jada Steuart, used with permission.

The horrific killing of George Floyd, an African American man who died from asphyxiation after a white police officer consistently pressed on his neck in Minneapolis, Minnesota, on May 25, has been the catalyst for putting the concerns of the Black Lives Matter (BLM) movement back on the front burner. 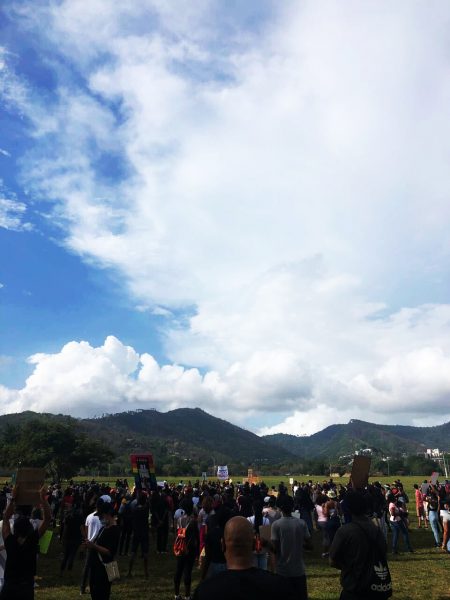 Protestors at the second Black Lives Matter demonstration at the Queen's Park Savannah in Port of Spain, Trinidad. Photo by Ashley Thompson, used with permission.

BLM's mandate to campaign against violence and systemic anti-black racism which manifests dangerously in acts of police brutality have inspired similar protests around the world.

On June 8, more than 500 people joined in solidarity with #BlackLivesMatter by demonstrating in front of the United States Embassy in Port of Spain. It was the second public protest on the issue in four days, with this one reportedly being more heated than its predecessor, though certain segments of society remained antagonistic toward the cause.

“No justice, no peace,” were the words echoed as protestors assembled in the Queen's Park Savannah. Drivers passing along the perimeter of the city's main green space held their hands in fists out of cars, sounded their horns, and shouted the slogan “Black Lives Matter” in solidarity not only with African Americans, but also in acknowledgment of the deep-seated racism still festering under the surface of Trinidad and Tobago's multicultural society.

While there were altercations with the police, mainly over lack of consent with regard to an officer filming protestors, the protest was peaceful and harmonious overall. For the most part, protestors practised proper social distancing protocols, which were further enforced by the police present.

In fact, US Ambassador Joseph Mondello spent some time talking with protestors. He commended everyone who turned out for their message — and for wearing masks and practising safe social distancing. 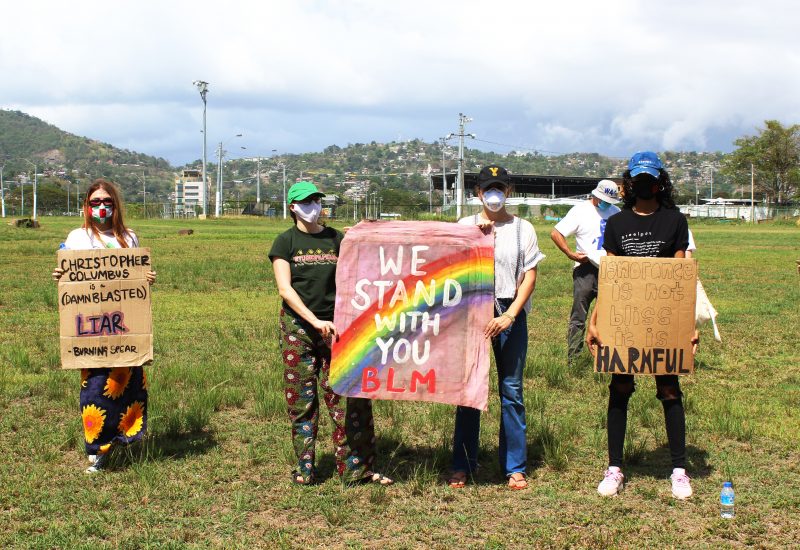 Demonstrators at the Black Lives Matter protest in Port of Spain, Trinidad, June 8, 2020. Photo by Jada Steuart, used with permission.

In the wake of Floyd's death, discussions about race have dominated social media in Trinidad and Tobago, fuelled by insensitive remarks made by business owners like Gerald Aboud, whose Facebook comments telling black people to change their mindset were widely deemed racist. The consistent tone-deafness displayed by Aboud and several others has prompted calls for boycotts of their businesses, the decision by black entrepreneurs to pull their products from these stores and the creation of lists of black-owned businesses shared on social media.

At the protest, Aboud's name was seen multiple times on signs and placards: 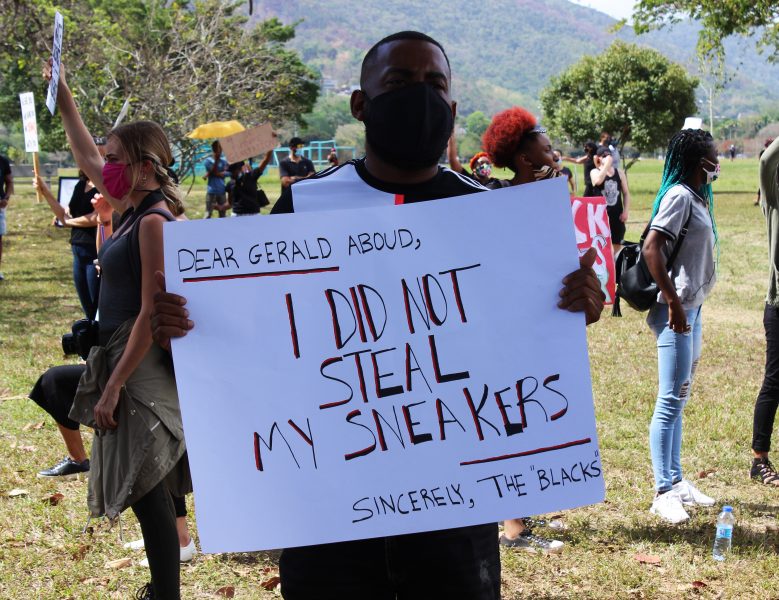 The placard reads, “Dear Gerald Aboud, I did not steal my sneakers. Sincerely, ‘The Blacks.’ Photo by Jada Steuart, used with permission.

In a country that prides itself on equality and unity — the national anthem, after all, proclaims, “Here every creed and race find an equal place” — it is telling how much the #BlackLivesMatter movement has triggered such a response.

There is no disputing, however, that racism thrives in Trinidad and Tobago, in a multitude of ways: subtle or sometimes blatant racial tensions between different ethnicities, institutionalised racism that has traditionally made it harder for black people to thrive economically, and the fact that the majority of the country's wealth lies in the hands of the one percent. 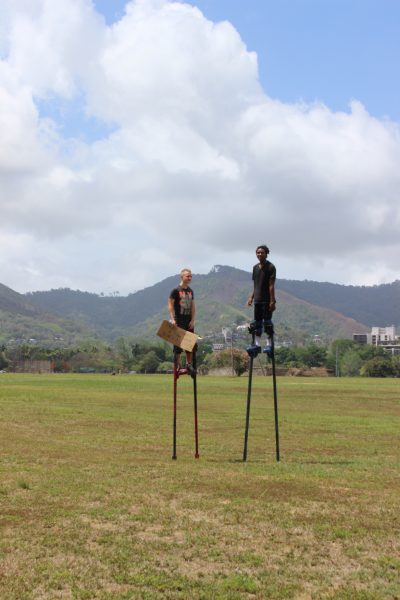 Demonstrators on stilts, honouring the Trinidad and Tobago Carnival character of the Moko Jumbie (a tradition that originated from West Africa), at the Black Lives Matter protest in Port of Spain, Trinidad, June 8, 2020. Photo by Jada Steuart, used with permission.

As a postcolonial society, the issue of race is an integral part of Trinidad and Tobago's history; racist attitudes can be cross-generational.

Trinidad and Tobago Carnival, arguably the country's biggest national festival, is one example of this. Although its modern incarnation may look like a glorious street party, some Carnival bands remain segregated by class and colour. The festival's origins were rooted in rebellion against colonial authorities.

The inequitable systems Trinidad and Tobago inherited from Great Britain post-independence have not been completely dismantled. Many of those structures still cast a long and imposing shadow on the lives of black people, but if we are to judge by the turnout at the June 8 protest, young people especially no longer seem prepared to look away.

While the majority of the turnout was people of African descent, there were other people of colour and white Trinidadians present as well, coming together through a global movement aimed at challenging the systems that keep the wheels of racism turning.

They are speaking with their voices and their wallets, and they seem ready to have the tough discussions necessary for true equality to emerge. Many are also sharing resources, educating others about black history to foster greater understanding:

Hiii fellow Caribbean people ?? The Black Lives Matter movement is especially relevant to us, and we want to share why! Please take some time to read this post and engage with the resources we’ve listed. Hope you are all safe and doing well. One love ❤️

It is a long-overdue discussion.