Actually, anti-Blackness has everything to do with Sri Lanka 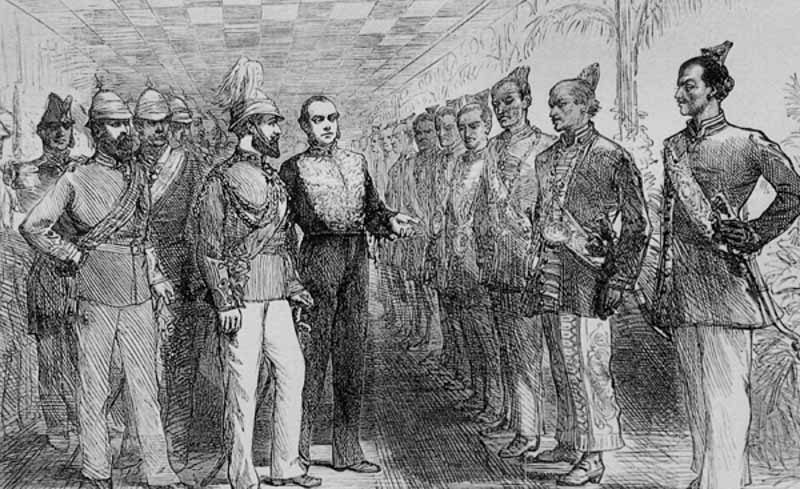 “Colonial rule resulted in social stratification that privileged English speakers and those mixed with European ancestry. And it thrived off a fragmented nation, polarizing our ethnic groups to prevent a united front that would defy the colonial state.” Photo: The Governor of Ceylon (now Sri Lanka) introducing Sinhalese chiefs to the Prince of Wales, 1876. Public domain.

This post by Shenali Pilapitiya originally appeared on Groundviews, an award-winning citizen journalism website in Sri Lanka. An edited version is published below as part of a content-sharing agreement with Global Voices.

It is easy to feel disconnected from incidents of police brutality in the USA, and ongoing race wars across the world that continue to marginalize and disenfranchise Black communities, when we fail to recognize our own connection to the issue at hand. The truth is that regardless of where you are Sri Lankan in the world—be it a member of the diaspora, or a resident at home—Sri Lankans are complicit in systems of anti-Blackness. As long as colonial legacies continue to govern our sense of identity, politics, and society, and until we unearth internalized and systematic prejudices against Black communities and ourselves, we will continue to be complicit in anti-Blackness.

Why anti-Blackness is the essence of our racial struggle

In light of recent events of police brutality resulting in the murder of George Floyd—and the centuries’ worth of cases that we may never hear of—a global outcry against the prevalence of anti-Blackness has emerged.

At its core, anti-Blackness is the systemic and normalized marginalization, belittling, and undermining of Black folks and those in proximity to Blackness. Within our communities, it manifests itself through racism, colorism, and false logics of Asian superiority and exceptionalism. The concept emerges through colonialism, wherein anti-Blackness was used to dehumanize Black bodies and therefore justify a white supremacist sociopolitical order. Anti-Blackness and racism are inseparable schemes; it is the logic of anti-Blackness that enforces racial hegemonies worldwide.

Recognizing systems of anti-Blackness is a critical step towards solidarity against white supremacist institutions that continue to affect people of color. What is so distinct about racism is that it is heavily intertwined and inseparable from social organization, class relationships, and societal stratification processes. With the onset of modern capitalism, which is founded through the anti-Black and racist transatlantic slave trade, a world order based on the economic exploitation of the Global South emerges. There is no modern industry, no world trade, and no capitalism—the very foundations of the West as we conceive it today—without slavery and imperialism. And of course, slavery and imperialism are materialized through the injurious and devastating construct of racism, which has always relied on anti-Blackness.

The reach of imperialism and modern capitalism was soon extended from the African continent to our own shores with the arrival of colonization. It was the economic exploitation of Sri Lankan goods and labor that gave rise to a prosperous colonial state. Colonial rule resulted in social stratification that privileged English speakers and those mixed with European ancestry. And it thrived off a fragmented nation, polarizing our ethnic groups to prevent a united front that would defy the colonial state. Today, racial hierarchy is continually evidenced through the global monopoly on trade by Western countries, the exploitation of Asian and African economies through structural adjustment programs, and trade agreements that ultimately harm our nation and others in the Global South.

The anti-racist struggle is thus the collective struggle of the Global South, of which Sri Lanka is naturally a part. It is the rejection of a colonial logic that perpetuates Blackness as inferior, and denies humanity and dignity to people of color. By being complicit in systems of anti-Blackness, we are merely contributing to a sustained racial hierarchy that privileges white supremacy.

Forms of anti-Blackness among Sri Lankans

To propel systemic anti-Blackness, other minority groups have been co-opted to further a white supremacist agenda. The Model Minority Myth, as originating in relation to the Asian-American community, characterizes Asians as a monolith: polite, hard-working and law-abiding peoples who have achieved higher levels of success than other people of color and immigrants – specifically, Black people. The result is a false narrative of Asian exceptionalism. The myth fallaciously lauds Asians in service and in proximity to whiteness, while erasing narratives of Asian poverty, exploitation, and continued subordination to a white supremacist governing class.

For diaspora Sri Lankans, the Model Minority Myth is integral to the immigrant experience. It is the social conditioning that wires us to believe that hard work and compliance will reward us and ease our integration into white society. And it forces us to believe that we are somehow better than other minority groups, particularly, Black and Latinx communities, because we have abided by the status quo. The tragic Catch-22 of the myth is that we merely become pawns in a racial game designed to uphold white supremacy, and are complicit in the subjugation of other minorities.

At home, our colonial hangover crashes course with the Model Minority Myth at the intersection of white institutions and credibility. Its manifestations are numerous: the prestige and exclusivity of international schools, the prevalence of foreign advisors in our government institutions, the brain-drain of Sri Lankan intellectuals to the West, the major missionary schools that dictate much of our social conditioning long after the completion of final A-level examinations.

A common example of the Model Minority Myth at home is the presence of ‘foreign-only’ and ‘tourist-only’ businesses. Despite government threats to cancel the licenses of such institutions, these businesses have prevailed over the years due to economic dependency on white, foreign patronage. If you are a local Sri Lankan visiting popular tourist destinations such as Ella, or Mirissa, you are no stranger to the foreign-only service concept.  And, even when restaurants and businesses do not explicitly state that they only serve foreigners, the foreigner-only mentality prevails and you are certain to feel unwelcome at these locations. Of course, the notion that it is favorable to serve a white customer reveals an insidious, internalized racism—to serve people from your own racial and ethnic background is belittling because they are somehow ‘lesser than’. In reality, it is simply contributing to the model minority myth, a fallacy spearheaded by white supremacist norms that applaud us as exceptional because we are hardworking in our service to them. We proudly champion our hospitality, but this quickly turns to indulgence when our businesses pander to serve foreign customers. We are complicit in systems that patronize and condescend to us, and we internalize a logic that we must uphold and cater to white supremacy.

The lesser-known minority of Sri Lanka are the Kaffirs: an ethnic group of Afro-Sri Lankans originating from the slave labor brought into Sri Lanka by the Portuguese. Today, the Kaffirs face cultural and linguistic extinction; there are only 500 or fewer Kaffirs living on the island. It is impossible to ignore the anti-Blackness that has contributed to a lack of cultural preservation and awareness of Kaffir peoples. Kaffirs have historically lacked property and have largely been relegated to work as daily paid laborers, which contributed to a lack of economic capital and mobility within Kaffir communities. They have faced discrimination and isolation on the basis of their distinct physical features. Their histories are not taught in schools, and their narratives are not incorporated into the vista of Sri Lankan identities. The result is a chronic neglect of Kaffir peoples, marginalizing and isolating their communities for generations. It is undoubtedly their Blackness that has relegated them to a status that is somehow “less” Sri Lankan, or deviant from whatever it means to be Sri Lankan in mainstream understanding.

Across Sri Lanka, colorism is hardly a foreign concept. A newspaper advertisement for a suitable bride will use fair skin as a bartering tool. The praise of lighter-skinned women is a recurring theme in Sri Lankan popular music—one of our favorite Baila anthems is literally titled “Sudu Menike”, meaning white or fair-skinned lady. Proximity to whiteness, via fairer skin tone, has conferred privilege in our societies resulting in practices such as skin bleaching which have vast physical and mental health consequences. It is the epitome of anti-Blackness, a Machiavellian notion that dark skin is inferior.

Anti-Blackness is relayed through covert, everyday forms of racism and appropriation. It is the use of the word “kalu” (black) as an insult, as opposed to “sudu” (white or fair) as a compliment. It is using the N-Word and undermining the severe historical and present-day ramifications of the slur. It is the selective participation in Black culture—to love reggae and rap, to mimic Black fashion and trends, and to then ignore the very real and damaging sociopolitical issues that plague Black communities worldwide.

Why we need to care

Assuming that we are untouched by anti-Blackness as Sri Lankans is a false and harmful premise. We have directly benefited from systemic anti-Blackness, and we have also internalized these racist systems in ways that are harmful to our own communities. We are implicated in anti-Blackness the minute we interact with Black culture and knowledge production without accounting for—and acknowledging—the ongoing oppression of Black folks. We fail to recognize that being complicit in anti-Blackness is contributing to our own socio-economic exploitation by Western capitalism.

Nevertheless, there are some simple steps we can take to rectify anti-Blackness. We can dismantle and reject the Model Minority Myth. We can take collective steps to preserve and celebrate our own Kaffir peoples. We can consciously work to correct colorism in our societies by calling out the people around you who reinforce colorist standards, reporting damaging media promoting whiteness as beauty. We can support local and small businesses, Black artists and musicians, and attempt to reclaim some economic leveraging that has been compromised by the economic monopoly of the West.

Eliminating racial oppression must come from confronting the implicit biases in our personal and structural wiring. Addressing anti-Blackness can hopefully resolve some of the long-lasting implications of colonization and white supremacy by promoting solidarity across communities of color.