What next for Taiwan after pro-Beijing mayor ousted in recall vote?

Politicians friendly towards the mainland are looking increasingly unelectable 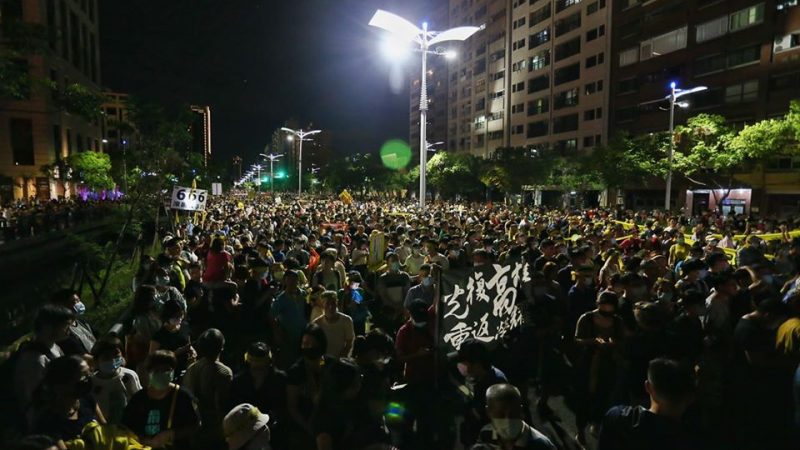 Rally to campaign for the recall of Han Kuo-yu on June 5 2020. Photo from We Care Kaohsiung

A rising politician and former presidential candidate who favoured stronger relations with Beijing has been recalled as mayor of Taiwan's second largest city, creating a fresh irritant in strained relations with China.

Han Kuo-yu's recall marks the first time a mayor was jettisoned by this method prior to completing a term.

Under Taiwanese law — revised in 2016 — over a quarter of Kaohsiung's nearly 2.3 million-strong electorate needed to vote for the recall and outnumber dissenters in order for the move to go through.

Rise and fall of a friend of China

Han won the Kaohsiung mayoral election in 2018 with 892,545 votes. The southern city is considered “deep-green” — its residents had voted in favor of the pro-independence Democratic Progressive Party for 20 years prior to his election.

The recall campaign was led by a number of small political groups. We Care Kaohsiung, one of the major citizen groups behind the campaign, accused Han of failing Kaohsiung residents by running for the presidency rather than fulfilling his promises to solve the city's problems.

Han’s political agenda is all about economic prosperity and he sees closer economic and political cooperation with China as the only path to that goal.

In 2018, his election slogan was “Goods go out. People come in. Kaohsiung makes huge profit” (貨出得去，人進得來，高雄發大財). The aim was to ramp up exports to China and bring in more tourists from the mainland.

But Kaohsiung’s economy failed to flourish as he focused his energies on the 2020 presidential election,  which put a dent in his popularity at local level.

His national election campaign slogan was “Safety for Taiwan. Money for the People”（台灣安全 人民有錢), which implied that Taiwan’s national security and prosperity relied on its relationship with China.

The campaign missed its mark and Tsai Ing-wen won a landslide victory.

Han's defeat at both national and local levels indicates the limitations of pro-Beijing platforms in Taiwan's current climate.

Pro-independence groups accused Han of being backed by the Chinese Communist Party. Han publicly supported the 1992 Consensus, an agreement signed between then-ruling party Kuomingtang and China, whose principle was “One China with different interpretations.”

In January 2019, however, Chinese leader Xi Jinping went further, initiating a push to make Taiwan sign up for “One Country Two Systems” in the spirit of Hong Kong.

But the subsequent chaos there — triggered by China's efforts to ram through an extradition bill via its proxies in the Hong Kong legislative council — has convinced many Taiwanese that “One Country Two Systems” is not what it is portrayed as being.

Chen Yichi of the Taiwan Statebuilding Party, a pro-Taiwan independence political party that was a key mover in the recall campaign, celebrated the campaign's success on Facebook.

The international message behind the successful recall of Han Kuoyu is that Taiwan people have said no to China, embarrassed Xi Jinping and expressed their support for Hong Kong… We have to be serious and act on countering the infiltration of CCP’s agents in Taiwan.

The overwhelming vote in support of Han’s recall also represents a broad blow to the KMT who viewed the business-minded politician as a saviour (一人救全黨) and had therefore mobilized around him.

Hung Hsiu-chu, a leading figure in the KMT echoed Han's criticism of the vote and attacked the ruling DPP for backing the campaign.

Han’s recall is against the principle of democracy as the ruling party did not follow the principle of administrative neutrality. It mobilized pan-green media outlets to smear Han. It treads on democracy in the name of democracy and manufactures hatred and antagonism. It has spread the seeds of unjust, injustice and political instability around Taiwan… regardless of the result, there is no winner as this is a democracy scandal that everyone has lost. It is a shameful regression of democratic development in Taiwan.

But current KMT Chairperson Johnny Chiang took a different tack, expressing respect for the choice of voters and apologizing to Kaohsiung residents for the party’s failure to fulfil their expectations.

China-focused political analyst Alex Payette predicted a crisis inside the century-old KMT, which ruled without opposition until DPP won the presidential election for the first time in March 2000.

#HanKuoyu ‘s #韓國瑜 defeat on June 6 triggered a political crisis inside the #KMT #國民黨 . We might see a new party emerge in #Taiwan #台灣 formed by the more progressive elements of the #Nationalist Party as the #Taiwanese economic elite is still waiting a middle ground party

On the other hand, some commentators anticipate that Beijing will turn to increasingly strongarm methods to get its way if the KMT decides to abandon its long-held “One China” principle.

Kaohsiung will elect a new mayor for the city no later than September 12. DDP’s Vice Premier Chen Chi-mai is likely to run in the vote while the KMT has yet to put forward a candidate or a platform.