The mural will not be whitewashed: How dissident poet Joseph Brodsky continues to inspire free-thinking Russians 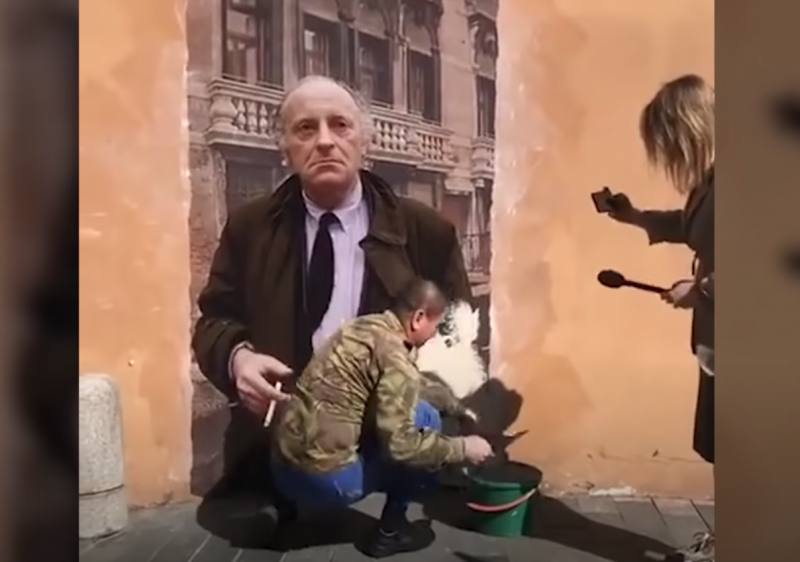 Screen shot from Alexei Navalny's YouTube channel showing how Brodsky's graffiti is painted over in white on May 25, 2020.

The 80th anniversary of the birth of Russian poet and Nobel laureate Joseph Brodsky was marked this year in Russia by an incident on May 25 highlighting the special place writers still hold in Russian political culture.

Iosif Brodsky (known as Joseph Brodsky in the English-speaking world) holds iconic status in Russian-speaking culture: he is considered a master of Russian poetry, one of the very few approved of by that giant of Russian poetry of the 20th century, Anna Akhmatova. Brodsky won the Nobel Prize for Literature in 1987, one of the only six authors who write in Russian to receive the award (the others are Ivan Bunin, Boris Pasternak, Mikhail Sholokhov, Aleksandr Solzhenitsyn and Svetlana Alexievich). He is was also a political dissident who was finally allowed to leave the Soviet Union in 1972, after having been imprisoned, and detained in mental institutions and forbidden to publish.

Even though he was invited back to Russia after the fall of the Soviet Union in 1991, he never returned to his native land. Yet he became extremely popular in Russia—his work was widely published and studied, and even included in the Russian school curriculum. The anniversary of his birth, May 24, 1940, is an annual observance, and the celebration of what would have been his 80th year was anticipated this year.

One of the many tributes paid to Brodsky took the form of a photorealistic mural painted by artist Oleg Lukyanov on a wall on the street where the Brodsky museum is now located in St. Petersburg, which is also the location of the “one-and-a-half room” where he lived before being able to leave the country.

On May 25, however, the image was painted over in white by the administrator of the school to which the wall belongs. The school alleged that Lukyanov did not have permission from the city authorities to paint on the wall.

This tweet from the pro-government TV station REN TV shows the wall before and after:

In Saint-Petersburg the authorities explained why they painted over the graffiti-portrait of Brodsky. The administration noted that the writer, most likely, would ot have approved to have his image painted on the wall of a school. And they said there had been no prior agreement with the relevant committee of the city, thus is was painted over.

But the matter did not end here. The Russian media and blogosphere rapidly shared the news, turning the wall into a symbol of freedom of expression in a country which for the last 20 years, under the influence of Vladimir Putin, continues to restrict artistic freedom and freedom of expression, and has become obsessed with controlling the public sphere.

By May 26 the white paint began to be covered by quotes from Brodsky himself, with fans also bringing candles and flowers. As the popular independent TJournal news platform tweeted (not without humor):

The story about Brodsky's image in Saint-Petersburg is not over. Yesterday the graffiti was painted over, but people started writing verses over it, before being painted over as well. It seems this story will require a lot of paint.

Memes and humor fuel the only remains of alternative political life

The backlash took on even larger proportions as writers, artists, and meme-makers jumped on the case to express their frustration with censorship in Russia and with the servile, cowardly reactions of public administrations to the appearance of any narrative that does not follow the Kremlin line, particularly in public space.

In Russian and Soviet history, there is a long list of writers, and particularly poets, who have displeased rulers and paid a high price because of their refusal to be censored: Pushkin, Mayakovsky, Pasternak, Akhmatova and many more—the list is long.

In this video, prominent authors including Aleksandr Genis and Tatiana Tolstaya—both renowned for their refusal to support Putin, unlike many other Russian intellectuals—discuss the issue in an online show called White Sound Tolstaya launched in April 2020 together with journalist Ksenya Burzhskaya. In this episode from June 4, Tolstaya dubs Putin “the Emperor”, while writer and journalist Yakov Gordin, explains Brodsky's current popularity in Russia among young people under 25.

Well-known Russian journalist and music critic Artemy Troitsky posted photoshopped images of the white-washed wall featuring among other things, a Bansky-style image in which Putin is depicted as the wall's cleaner:

The meme featured in the tweet below draws a comparison between the censoring of the Brodsky mural and the recent amendments to the Russian Constitution that would further extend Putin's rule if approved in a July 1 vote (lower image):

They painted over Brodsky, let's paint over the Constitution

And the image shared in this tweet shows one of Putin's typical television addresses to the nation, whitewashed over in the same manner as the Brodsky mural:

Alexei Navalny, one of Putin's few political opponents, also commented on the case in an eight-minute video on his YouTube channel that has been viewed by over 100,000 people. In the video—which is titled called “Paint over. Destroy. Forbid”, a member of Navalny's team makes a long list of street art recently banned and painted over in Russia: