This may not have been the country's last weekend lockdown 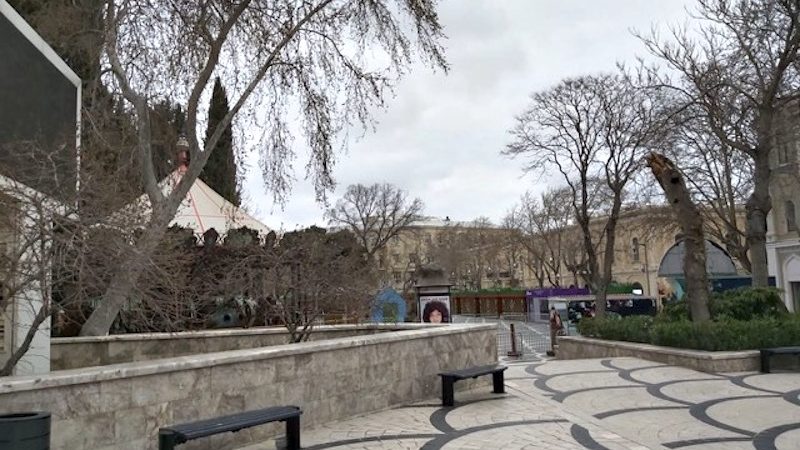 The intersection of Istiqlaliyyet and Nigar Refibeyli Street in a deserted Baku, the capital of Azerbaijan. Photo (c): Akbar Mammadov. Used with permission.

On June 3, the country's authorities instituted a weekend lockdown, the strictest COVID-19 measure introduced in the country so far. lt bans all residents from leaving their homes from midnight on Saturdays until six o'clock in the morning on Mondays.

Azerbaijan confirmed its first COVID-19 case on February 28 and introduced a special quarantine regime on March 24. According to the John Hopkins University Map, there have been 7,553 COVID-19 cases in the country so far, including 88 deaths. But since the loosening of restrictions in recent weeks, COVID-19 cases now appear to be on the rise again.

The country’s Prime Minister Аli Hasanov announced the lockdown on June 4, saying it was linked to a heightened infection rate. The decision to impose the curfew came after the country registered a record 325 new COVID-19 cases and five infection related deaths on June 3. The weekend lockdown was applied in the capital Baku and throughout the Sumgait, Ganja, Lankaran, and Absheron regions. This weekend curfew could be in force for up to two months depending on how the infection curve develops.

The head of the state public health service, Ramin Bayramli, who proposed the curfew during the briefing of coronavirus task force on June 4, said in a meeting of the Cabinet of Ministers that the decision was taken “in view of the fact that the daily number of coronavirus-infected people has exceeded 200 people recently.”

The country's quarantine regime was loosened on May 18. The previous restrictions required residents to obtain an SMS permit to leave their homes and restricted access to parks, boulevard, museums, galleries, and other recreational facilities. The SMS permit system had been introduced on April 4.

However, on May 31 Azerbaijan extended the lockdown until June 15, alongside these relaxed quarantine rules. These included the opening of large shopping malls (except for children's and entertainment centres, cinemas, and public catering facilities), cafés, restaurants, and open-air sports competitions. COVID-19 cases spiked.

While the SMS system may have been considered strict, this weekend lockdown is even stricter. The new rules prohibit residents from leaving their homes unless faced with immediate danger to life and health. They may also attend a funeral of a close relative with permission from the #102 Call Centre, managed by the Duty Service Administration of the Ministry of Internal Affairs.

It was also announced that all stores and pharmacies would remain closed during the two-day curfew. This prompted a wave of COVID-19 panic buying on June 5.

Furthermore, all public transport ceased over the weekend and the use of private vehicles was forbidden. The country imposed fines in the range of $58 to $2,941 for the using any private transportation during the weekend lockdown, with higher penalties for state officials. In some cases, culprits may face administrative arrest for a month.

Head of the press service of the Ministry of Internal Affairs Ehsan Zahidov stated on June 5 that residents will not even be allowed to take out the trash during the curfew. Violators of curfew might be fined $58 (100 AZN), he warned.

There are some exceptions. The Cabinet of Ministers has announced a list of state agencies and other organisations whose employees are allowed to leave their homes during the lockdown, but only after being registered at allow.e-gov.az using an electronic signature. However, even in these cases, citizens are not permitted to go to work in private vehicles and must use transportation organised by their workplace.

Head of Baku Chief Police Directorate Kamran Aliyev told local media that those who have permits to work may reach their workplace by bicycle or by foot if it was nearby.

Earlier on May 31, the parliament passed a law mandating the use of face masks in public places as of June 3. The law imposes fines ranging from $29 to $235 for failing to wear masks. The law also encourages social distancing of 1.5 to two metres in all public places.

The national flag carrier Azerbaijan Airways (AZAL) announced on June 4 that all airports will remain closed until July 1. Azerbaijan suspended all its air traffic in the second half of March.

Russia  23 hours ago
Cancel this reply