In Nicaragua, people apparently die of ‘pneumonia’, not COVID-19

Today, like in 2018, doctors are put into a tough situation 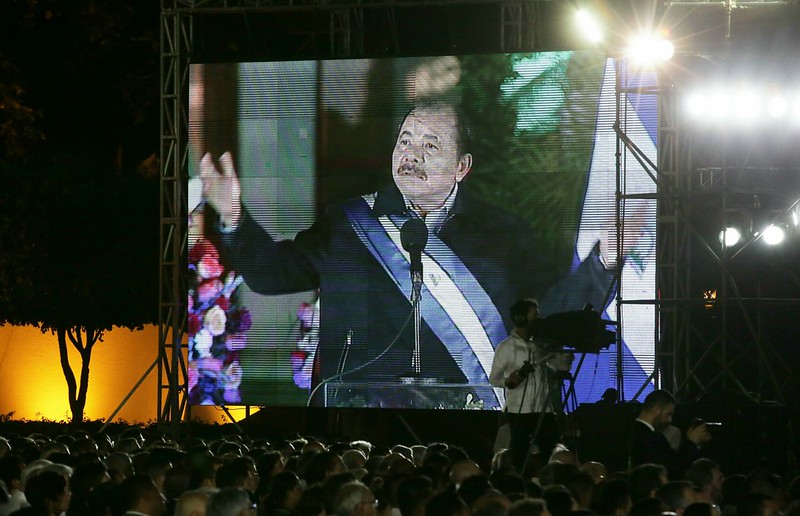 President Daniel Ortega during his inaugural speech in 2017. Photo license CC BY 2.0

In the midst of COVID-19, Nicaragua has been living in an alternate reality. President Daniel Ortega and the Vice President, his wife Rosario Murillo, have neglected the pandemic. While global health organizations and governments in other countries have instructed their citizens to quarantine, wear masks, and adopt social distancing measures, Ortega and Murillo have done the complete opposite. Today 980 people,according to a non-governmental estimate,showing COVID-19 symptoms have died in Nicaragua, the highest figure in Central America. Ortega says these deaths are due to “pneumonia“.

This problem is not new. The Nicaraguan government has been neglecting the healthcare system and letting people die since 2018.

The recent negligence became evident two days after the World Health Organization called COVID-19 a pandemic. On March 13—while neighboring countries like El Salvador, Costa Rica, and Honduras had called a state of emergency—Murillo promoted a march titled “Love in times of Covid-19,” declaring that in order to combat the virus one must do it “with love and faith.” Businesses, schools, and government offices remained open. Behind the facade of this declaration of love, however, are all the human rights abuses perpetrated by the couple since Ortega's return to power in 2006.

In April of 2018, massive anti-government protests broke out throughout Nicaragua. Citizens, and especially students, were injured or killed by police and paramilitary groups. According to the Inter-American Court of Human Rights, some 317 people died in the space of four months. As part of that scenario, Nicaragua's Ministry of Health was already committing abuses against the population.

For example, 15-year-old Alvaro Conrado, who was shot in the neck by a sniper while protesting, was denied access to the nearby Cruz Azul public hospital in Managua, the capital. Alvaro was taken to Hospital Bautista, where he died hours later. According to medical staff at Bautista, Alvaro would have survived if medical personnel at Cruz Azul had attended to him.

Why would a public hospital refuse to administer to injured people? Because the Nicaraguan Health Ministry is controlled by Ortega and Murillo. During the protests, medical staff were threatened with dismissal if they helped protesters. The Health Ministry fired about 135 doctors, nurses and other medical personnel. The majority of them left the country due to constant persecution from government authorities. Now, two years later, Ortega and Murillo, along with the Health Ministry, continue to inflict human rights abuses on the population by minimising the danger of the pandemic.

Hospitals are filling up. Late-night undercover burials show that the situation is out of control. A video from the AFP news agency reported that one funeral home buried 200 people in one night. The western city of Chinandega attracted international attention when videos of “express burials” circulated on social media. Vice President Murillo called the burials “fake news.”

On May 19, an announcement from the Health Ministry said that Nicaragua was doing a great job, despite the fact that the number of official cases of COVID-19 had jumped from 25 to 254 in the space of a week. These numbers also contradicted those recorded by the interdisciplinary collaborative project El Observatorio Ciudadano COVID-19, which at the time of writing is reporting 3,458 “suspected” cases of infection.

As for doctors, they are living their worst nightmare. One doctor at the Hospital España in Chinandega said that hospital authorities continue to ignore safety measures and failing to provide medical protection equipment. “They are literally throwing us into a slaughterhouse,” he said.

Doctors fear a “viral genocide” in the country as a result of government actions and have called for an immediate “voluntary national quarantine” of four weeks. More than 500 doctors signed a document insisting that Ortega-Murillo take the proper measures before it’s too late. Again, the Vice President reacted by saying the doctors were “spreading lies”, which begs the question as to why bodies were buried in secrecy if they died of pneumonia. Nicaragua, a country whose weak health infrastructure was already ill-equipped to contain an influx of patients, now witnesses dead bodies outside hospitals.

Entrance to the morgue of the Hospital Aleman. The situation is only getting worse: The average number of deaths per day is 10. Authorities have set up a room for patients with #Covid19, and another one they have called “Pre Covid”. Health personnel is alarmed, but the regime denies the seriousness.

The negligence of Ortega and Murillo regarding the pandemic was no surprise, given the governing couple's pattern of committing human rights abuses.

Today, as in 2018, doctors find themselves in a tough situation. They can either speak out against the Ministry of Health and face the risk of being fired and be eventually forced to flee the country due to persecution; or they can decide to stay and work without proper medical equipment and run the risk of contracting COVID-19.

Opposition members also report they are likely to be denied medical attention at public hospitals. Wendy Juarez, a former political prisoner and member of Construimos Nicaragua, described the situation as follows:

By going to public hospitals as an opposition member you run the risk of not getting tested, because the medical staff decide who gets tested and who doesn't.

She said that to receive immediate medical attention she would have to go through a medical hotline, Nicaragua's Medical Unity.

In the meantime, Nicaraguans are doing their best to survive by taking care of themselves, amidst growing discontent. No one knows how this is going to end, but with express burials taking place and no sign that the government is going to listen to scientific advice, Nicaragua may have already lost its battle against the pandemic under its alternate reality.