Is this how the Socialist Party of Serbia sees voters? 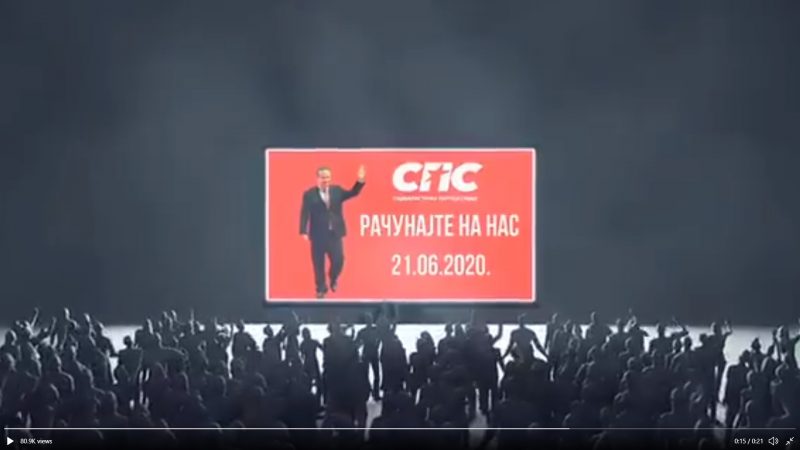 Photo: Screencap from video clip published by Branko Ružić, vice president of the executive board of the Socialist Party of Serbia.

The leader of the Socialist Party of Serbia (SPS), Ivica Dačić, has distanced himself from a pre-election video clip that has become the butt of zombie film jokes on social media.

The video was published on Twitter on May 31 by Branko Ružić, the vice president of the SPS executive board.

It shows a crowd consisting of animated gray figures flocking slowly towards a billboard featuring an image of Dačić and the scheduled date for parliamentary elections – June 21, 2020. The slogan asks voters to “Count on us…Towards victory! #socialists”

Both Dačić and Ružić serve as ministers in the coalition government of Republic of Serbia.

Dačić occupies the position of First Deputy Prime Minister and Minister of Foreign Affairs, while Ružić holds the post of Minister of Public Administration and Local Self-Government

The background music for the advert is a punk version of the iconic song “Računajte na nas” (Count on us) by singer and songwriter Đorđe Balašević, which was originally published in 1978.

Ružić’s tweet received over 80,000 views and hundreds of negative reactions in its first two days online.

Many of them described the video as “horror” or “creepy” while comparing voters depicted in the advert as characters from TV series such as the Walking Dead and Game of Thrones.

Count on the zombies. This is what they are.
It can't get more creepy than this.
As if [horror filmmaker John] Carpenter himself directed the video.

Dačić reacted with a statement published on the SPS website, saying the clip was not an official publication of the party, but rather “an independent creation.”

This is not an election video and has nothing to do with SPS. This is an independent creation which appeared on social networks. As of this moment, SPS has not released any video clips.

The Socialist Party of Serbia ruled the country from 1990 to 2000, at a time when Serbia led several bloody wars in the Balkans. Back then the party was run by Slobodan Milošević,

Some of the reactions to the video related to that legacy, in particular commenting on the text of the tweet “Towards Victory!”

These reactions sarcastically referenced supposed ‘victories’ that included the slaughter of civilians in Vukovar, Sarajevo, Srebrenica and during the War for Kosovo.

Which victories do you refer to, man? In Vukovar? Sarajevo? Srebrenica? Kosovo? I'd like to get some of the drugs you are on, but I don't have the money!

In 2008, after several years in opposition, SPS once more joined the government, this time as part of the ruling coalitions dominated by current President of Serbia Aleksandar Vučić.

Vučić himself had served under Milošević as information minister during the 1990s.

Đorđe Balašević was among the few famous Serbian artists who openly opposed SPS policies during the rule of Milošević.

His anti-war and anti-corruption positions earned him a wealth of respect in former Yugoslav countries, including those who were targeted by the Serbian nationalist regime's aggression in the 1990s.

The 1978 song “Računajte na nas” became a pop rock anthem across former Yugoslavia, and was widely performed and sung at youth gatherings during the 1980s.

In the years following the breakup of Yugoslavia, when the ideals of brotherhood and unity guiding inter-ethnic policy dissolved, Balašević stopped performing the song at live performances.

During a 2018 concert in Split, Croatia, he explained his refusal:

Kids, don't raise those subjects. Tonight with us is Dino Rađa, one of the greats of world sports. These kinds of things should bring us joy, not Yugoslavia. Yugoslavia was no good, if it was good it would not have broken down in such a bloody way. Some people call me a Yugo-nostalgic, but I'm not Yugo-nostalgic, I miss [the Split basketball club] Jugoplastika, I miss those times, but not that state.