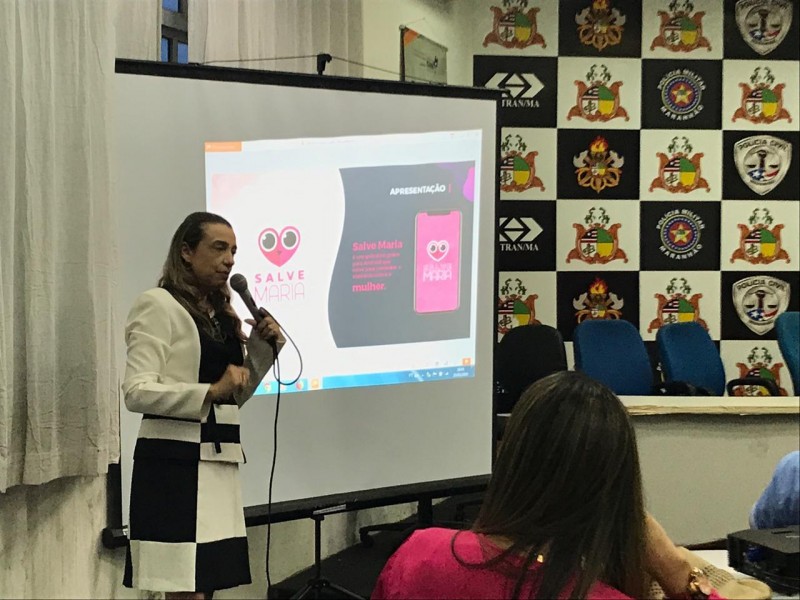 This story is part of Global Voices’ special coverage on gender-violence in Latin America [1].

A glass container the size of a mayonnaise jar was filled all the way to the top with a clear liquid. Inside, there was a human body part that looked like it had been severed with a knife. ​Cinco Estrelas, a police clerk who was working on the case, took it to the magistrate in charge of internal affairs (corregedor) at an appeals court of Piauí, one of the poorest states [2] in Brazil.

The year was 2002, and that magistrate was Eugênia Villa, who recently recounted the story to Global Voices in a conversation via Skype while quarantined in her home in Teresina, Piauí's capital. When she asked the clerk what the item in the jar was, he replied: “It's a woman's ear. I'm taking it to the morgue.”

Villa still remembers the shock. “That was a first for me,” she said. Since the women's police unit was on the same building, she headed there to investigate, as she recalls:

The female police chief told me that the ear belonged to a woman who gave permission to her partner to cut it off. The woman had cheated on him and she said she deserved it. This is not something they teach you at the police academy or at law school. They don't teach you that it happens, that this is real life.

That episode would forever change Villa's career. At that moment, she decided to dedicate the rest of her life to bridging the chasm between real-life violence against women and Brazil's legal system. She dropped a 19-year career in architecture to join the police academy and went on to become a superintendent in her state's civil police.

In 2015, she created [3] Brazil's first police unit focused exclusively on investigating femicides. To this day, Teresina remains the only Brazilian city with such a unit.

Femicides are on the rise in Brazil [4], even though general homicide rates are down. An analysis [5] by newspaper Folha de S. Paulo published in February showed that 2019 saw an increase of 7.2 percent of femicide cases in relation to the previous year — that's 1,310 women killed in the country last year, most of them in episodes of domestic violence.

Villa's personal story is a testament to the struggles women face in Brazil's police forces. At age 32, she left a career in architecture and enrolled in law school. Shortly after graduating in 2000, she passed the test to become a police officer. Villa entered the police academy while pregnant.

I hid the pregnancy [during the test]. I was afraid they wouldn't approve me. (…) My career was made out of shattered paradigms.

Once in the academy, she teamed up with two other colleagues who were also pregnant to ask their superiors to be relieved from physical activities. Not only the academy rejected the request, but it also marked them zero in those disciplines, affecting their global average.

Eugênia went on to become the dean of that same academy a few years later and says that one of the first things she did was to ensure pregnant students were treated fairly. She says:

Changing the system from within

Women's rights legislation was slow to catch on in Brazil.

It took another 10 years for the country to pass legislation that punished women's attackers: The Maria da Penha Law [8], named after a women's rights activist [9] who became paraplegic after her husband tried to kill her, was sanctioned in 2006 and became Brazil's first law against domestic violence.

But for Villa, there is still much to be done:

There are several weaknesses. Starting with the term domestic violence, which limits women to the condition of “housewife.” Besides, under national law, killings of trans women aren't seen as femicides. Marital rape was inivisible for a very long time. There is a blindness around femicides outside of relationships.

Along with Brazil's first femicide department, Villa created a study group focused on gender violence as well as a method to investigate femicides. She is also the mastermind of Caravana Salve Maria (Hail Mary Caravan) [11], an interagency government program in Piauí focused on educating women about gender violence. She says:

Misogynistic ideas are embedded into the system. They have been reproduced for years, never questioned. What we did was to explain, through the scientific method, why this was wrong and how we could fix it. The prosecutor, the judge, the police… For a long time, they were blind to those issues.

Villa says that a former colleague of hers, a police chief, used to joke that Eugênia must have been beaten up by a boyfriend for her to care so much about violence against women.

“I was never physically beaten,” she laughs. “But I've taken a figurative beating when opening doors for change and for other women.” 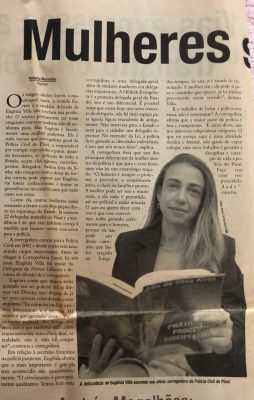 For an interview to a local publication, Eugênia made sure that the photograph featured her holding a book, instead of a gun | Photo: Personal Archive/Used with permission

After she took over the internal affairs department, a reporter from a local newspaper who was profiling her was surprised to find her in a floral dress while helping her son with homework. Villa says she intended to be photographed in that dress — while also holding a book, rather than a gun, she says.

At her current job, Villa is in charge of evaluating and improving the penal system in Piauí. As such, she oversees the training of police agents and stations when it comes to assisting women in situations of violence.

She never learned what happened to the woman who had her ear severed, the case that first piked her interest in gender issues within the legal system. But she believes that Piauí's security has vastly improved when it comes to supporting its female citizens.

Today, it's unlikely that that case would be left unresolved. What is lacking in the struggle against violence? An understanding that violence is structural and structuring of social relations.