Is China's ‘House of Cards’ in the Czech Republic beginning to wobble?

From Tibet to Taiwan, Beijing's insecurities have often found a stage in faraway Prague 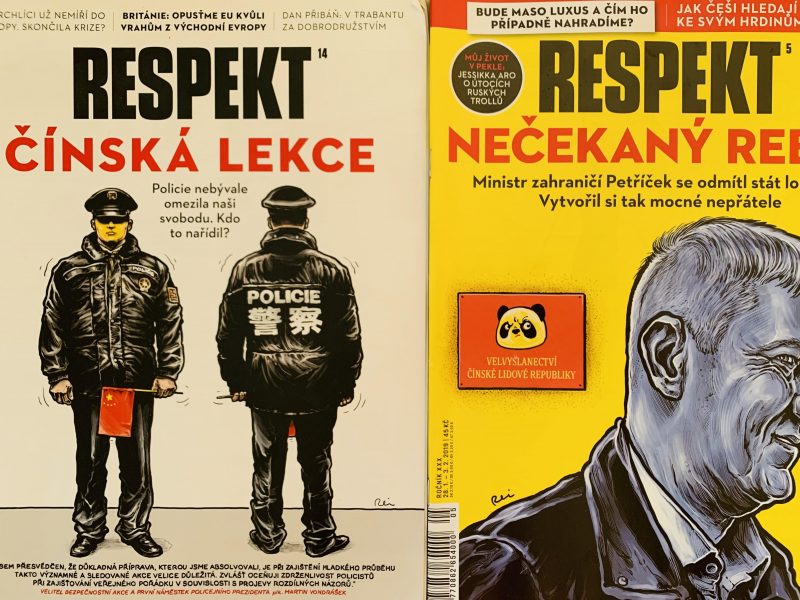 Cover of Respekt magazine, one of the most widely read weeklies in the Czech Republic. Recent covers have mostly been related to China's influence in the country. Photo by Filip Noubel, used with permission.

Back in 2015, when Czech President Miloš Zeman was the only leader of a European Union member state to attend a military parade in Beijing marking the 70th anniversary of the end of WWII, it seemed China and the Czech Republic were destined for a glorious friendship, leaving behind forever the raw feelings that they began the century with.

Five years on, China's footprint in the central European country has grown inexorably.

But as Beijing has made friends at the top, scandals have piled up, stoking public resentment towards the Middle Kingdom and empowering anti-China politicians in the process.

Global Voices looks at the television series-worthy developments that have shaped perceptions of China there in recent years.

Beijing could have hardly hoped for a more pro-China leader than Zeman of the Czech Social Democratic Party, who was elected president for the first time in 2013.

The country's first leader following the fall of communism in Central and Eastern Europe, Václav Havel, a dissident and outspoken critic of Communism, had been a disaster for the relationship.

Havel's friendship with the Dalai Lama, whom he invited several times to Prague, was a particular sore point, and made the Czech Republic an official ‘enemy of China’ amid sensitivities over Tibet.

Havel's successor, Václav Klaus, an economist, took a more pragmatic, business-first approach to relations with China. Klaus paid the first ever visit by a Czech president to Beijing in March 2004.

Yet it wasn't until Zeman's presidency that a Chinese leader — current President Xi Jinping — visited Prague, ushering in a strategic partnership, that encompassed political rapprochement and investment.

Many activists and oppositions feel that Zeman got too close to China for comfort, however.

The first scandal to insert China as a major political issue in Czech domestic politics was the reported arrest in Beijing on bribery charges of Ye Jianming. Ye headed the Czech operations of a Chinese investment company called CEFC China Energy. The precise nature of the allegations against him has not been made public.

Problematically, Ye was also Zeman's personal economic adviser and had his own office in the presidential administration at the time he was abruptly summoned back to Beijing.

While his sudden disappearance indicates that Ye ran out of political favour back home, the episode alerted the wider Czech public to the fact that Chinese investments can bring with them corruption concerns.

The political opposition, as well as citizen movements such as the Million Moments for Democracy, demanded transparency and investigations.

That same year, the Czech Intelligence Service, BIS — a body that reports to the government and not the presidential administration — released a report that rated China as a greater threat to the Czech Republic than Russia.

China has also increased its influence over Czech media.

According to Kateřina Procházková, a China expert and member of the Sinopsis project that decodes Chinese influence in the Czech Republic, the July 2019 purchase by Chinese company CITIC of Medea — one of the largest communication agencies in the Czech Republic — marked a new milestone in China's image-making efforts in the country.

Medea is a communication and media agency that commissions advertisements worth three million Czech crowns (US$ 120,000) every year. It can thus act as a distributor of paid ads and promotional articles, written in the interests of China and Chinese projects. (Then there are) media directly connected to Chinese partners, state partners and Czech pro-China lobbies, such as Info.cz, Sinoskop or TV Nova [a private TV channel with the largest market share], whose new owner is PPF [one the largest investment groups in the Czech Republic]

In November 2019, it emerged that the Chinese embassy had been secretly paying professors at Charles University to paint a positive image of Chinese investment and economic opportunities. The prestigious university is one of the oldest in Europe and widely revered in the Czech Republic.

In December 2019, it became known that top millionaire Petr Kellner — the owner of the PPF group referred to by Procházková — had hired a PR agency to support a local network of influencers, including politicians, journalists and China experts, to promote a positive image of China in the Czech Republic.

Now Taiwan has become a thing, too

As a communist state Czechoslovakia was among the first countries to recognise the People's Republic of China after the People's Liberation Army claimed victory in the 1949 civil war. That stance did not change, even after the disappearance of the “Iron Curtain” in Europe.

But just as Tibet haunted relations in the early years of the Czech Republic, so too diplomatically-isolated Taiwan has emerged as a surprise stumbling block.

At present, the President of the Czech senate, Miloš Vystrčil, a rival of President Zeman, is set to make an official visit to Taiwan, which is a major job provider in the Czech Republic.

The trip has taken on added significance since January 20, when Vystrčil's predecessor in the role Jaroslav Kubera, unexpectedly died of heart failure weeks before he expected to make the very same visit.

Just five days before his death, Kubera received a letter signed by the Chinese Embassy in Prague, warning him of serious consequences should he go ahead with the planned visit:

The Czech companies whose representatives will visit Taiwan with Senate Head Kubera will not be welcome in China, not even by the Chinese people. Czech companies that have economic interests in China will have to pay for Kubera's visit to Taiwan.

According to statements made by Kubera's widow and daughter, the president of the senate was under extreme pressure at the time of his death.

Further gripping public opinion was the revelation that the letter Kubera received was accompanied by a two-page note issued by the Czech presidential administration, which called Kubera's visit to Taiwan “krajně nevhodná” — “extremely inappropriate” — due to the harm it might inflict on Czech businesses operating in China.

This unfolding story comes as Taiwan has made inroads into Czech public opinion though successful “COVID-19 diplomacy”.

The unrecognized island-state has been donating masks just as COVID-19 test kits that Prague purchased from China proved largely unreliable.

Tapei's advocates in the Czech Republic include Zdeněk Hřib, Prague's mayor since November 2018, a member of the opposition Pirate Party, who studied there in his youth.

Popular and social media-savvy, Hřib's emergence as a serious political player at national level is perhaps the biggest threat to China's influence in the country in the medium to long term.

In the meantime, China expert Procházková predicts future drama in the Prague-Beijing-Tapei triangle.

“The planned visit [to Taiwan] by the new Senate president Vystrčil is a thorn in the eyes of the Chinese,” she told Global Voices. “They will do all that they can to prevent it.”