Will the government's patch approach make the country a new epicentre? 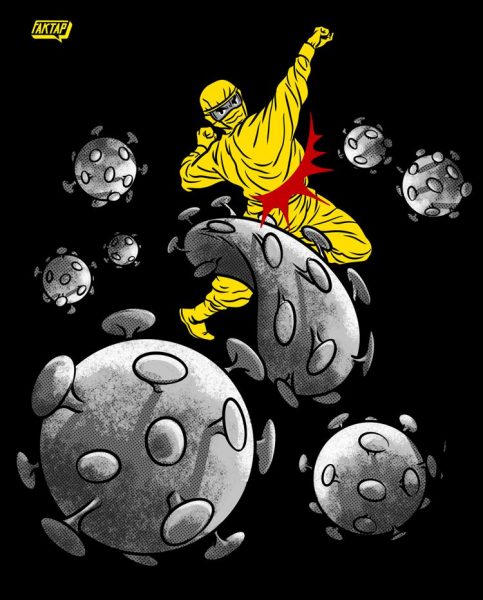 Not all heroes wear capes by Komik Faktap. Used with permission

The Twitter hashtag #IndonesiaTerserah (Indonesia, whatever) trended in Indonesia after health care workers expressed frustration over the relaxing of restrictions and the failure of many to observe social distancing protocols.

Doctor and prominent social media user Tirta Mandira Hudhi holds up a sign saying “Indonesia??? Whatever!!! Do whatever you want.”https://t.co/kjhHpM1bDF pic.twitter.com/BMwrAY2jGW

Health professionals later clarified that they have no intention of giving up, and they will continue to serve the public despite the non-compliance of some people with health guidelines.

An infamous example of this breach in guidelines is the gathering of a crowd to bid farewell to a popular McDonald’s branch in Jakarta, the nation’s capital, which is closing.

Indonesia is struggling to contain the spread of new COVID-19 clusters. According to government data, there are 24,538 confirmed cases and 1,496 COVID-19 deaths.

COVID-19 cases have been recorded in the country’s 34 provinces.

The Indonesian Pediatric Association said that the number of children dying there from COVID-19 is the highest in Asia.

The Indonesian government imposed movement restrictions only on April 10, which some observers believe was too late to prevent the spread of the virus. President Joko Widodo had earlier said that a total lockdown approach would harm the economy and displace millions of informal workers.

There are suspicions that Indonesia is trying out the controversy-laden herd immunity approach, although this has been denied already by a government official.

Nevertheless, the government approach has been criticized by several scientists. Biostatiscian Dr. Pandu Priono is one of them:

Whatever, perhaps there's no serious will to control the pandemic in Indonesia. Bear in mind that the Indonesian government has the obligation to protect the nation and homeland, etc. in accordance with the Constitution.

Let me repeat: Herd immunity without mass vaccination is genocidal.

The delay in rolling out COVID-19 measures by the central government has left provincial governments across the archipelago scrambling for solutions they can apply in their constituencies.

The lack of coordination between the central and local governments has put an additional strain on frontline health workers, many of whom are exposed to dangerous working conditions while receiving inadequate benefits.

“We risked our lives, but are being paid less than is adequate. Hundreds of nurses faced pay cuts and their thirteenth-month salary was withheld. Similar to others working on contractor status.

The Indonesian government has invested heavily in ventilators, which are made locally. It has also set up a dedicated website to monitor COVID-19 statistics and the spread of the disease.

But many have wondered if these efforts are too little, too late.

A public health expert quoted in a New York Times (NYT) said that mass transmission has already happened. In the coming weeks, new clusters might emerge due to Mudik.

Mudik is an annual homecoming tradition that sees urbanites join their extended families in the villages to celebrate Eid.

True to this habit, many went home to celebrate Eid with their family, ignoring the accompanying risks.

Meanwhile, President Jokowi announced on Instagram that his government will deploy the military to enforce health security protocols in public places once the quarantine directives loosen.