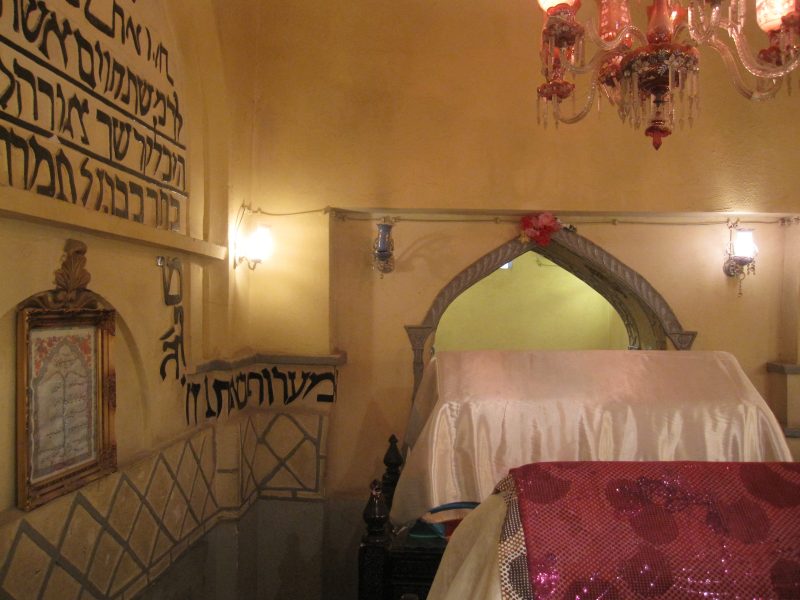 The interior of the tomb of Esther. Photo courtesy of Pooyan Tamimi Arab. Used with permission.

The desecration of three religious sites in Iran in the space of less than a week is a stark reminder of the insecure circumstances under which Iranian religious minorities have been living since the Islamic Revolution.

An attempted attack on May 15 on the tomb of Esther and Moredchai in Hamadan, an important pilgrimage site for Jews in Iran, attempted attack to Esther tomb, was followed a few days later by a fire in a Christian cemetery in Eslamshahr, just south of Tehran, and another fire at a Hindu temple in Bandar Abbas.

The authorities in Eslamshahr blamed the cemetery’s guard for burning grass. The Hindu temple fire was deemed accidental.

The threat made by members of Hamadan’s Basij militant student group to destroy the tomb of Esther and Mordechai as an act of revenge against Israel and Washington made headlines, and provoked reactions from several Jewish organizations, as well as the US government.

The tomb—believed to house the remains of the Jewish Queen Esther, wife of the ancient Achaemenid king Xerxes, and her cousin Mordechai—is also a protected Iranian Cultural Heritage site.

The Iran-based journalist Farzane Ebrahimzad tweeted that according to a local source, someone had thrown an object at the tomb. Iran officials confirmed that there was “minor damage” by fire at the site.

This incident is neither new nor isolated: since the Islamic Revolution in 1979, the symbols, places of worship, cemeteries and other buildings belonging to religious minorities have been attacked by unidentified perpetrators and official agents.

“The elimination of Persian-speaking churches has not always been violent, but more often than not this elimination has been accompanied by a gradual and systematic approach. Forcing churches not to accept new members, drying up their financial resources, limiting the days of meetings, forcing leaders to exile or threatening them to send to jail….there are pieces that are put together to rot the official churches, and finally, by removing their identity marks (such as the church and their tombs and other properties).”

Pooyan Tamimi Arab, assistant Professor of religious studies at Utrecht University in the Netherlands, shared with Global Voices his experience of visiting the tomb of Esther and Mordechai:

“I have been there myself several years ago, and already then a closed atmosphere surrounded the gated building. The person present at the time was clearly nervous when showing me around, asking not to be filmed, and avoiding sensitive topics. While the Islamic Republic may honor its Jewish citizens on occasion, this does not mean that Jews are not discriminated against in Iran or that anti-semitic tropes are not rampant as they have been for decades. The list goes on, attacks against Dervishes and persecution of Christian converts, which leads to a steady flow of religious minorities fleeing Iran to countries like the Netherlands, where I live.”

For 40 years, attacks on religious minorities in Iran have gone hand in hand with hate speech by the authorities and media, ranging from denials of the Holocaust to vilifying Baháʼís, Christian converts and even Sunni Muslims.

Regarding the impact of these actions, Pooyan Tamimi Arab said:

“[that] there is an impact should be without any doubt. Those who attack a Jewish mausoleum may feel emboldened by anti-semitic discourses. In other instances, when the state resorts to using concepts such as “superstition” (khurafat) to describe other minorities’ practices, this may give license to discrimination. In the anthropology of religion, we know of such cases, for example when white Americans designated native American dances as “superstitious”, this could be used to argue that that practice was not properly religious and hence did not fall under constitutional freedom of religion. In Iran, which does not even formally recognize all religions as equal, hate speech against religious minorities should thus be considered as having great potential for violence.”

Ayatollah Ali Khamenei, Iran's supreme leader, recently sparked outrage after releasing an anti-Israeli poster bearing the message: “Palestine will be free. The final solution: Resistance is referendum.”  The term “final solution” was used by the Nazi regime to refer to the genocide of Jewish people during the Holocaust.

Pressure on religious minorities has also taken the form of persecution of individuals by accusing them of promoting “propaganda against the Islamic Republic” or “belonging to hostile groups”—actions that have been condemned by international organizations such as the United Nations.

But these reproaches have had little effect, and Iranian authorities have continued, if not intensified, the discrimination against religious minorities.

One example of this is the recent change in ID card application forms. According to Pooyan Tamimi Arab:

“the pressure on Baháʼís has increased because the option of “other religions” than the officially recognized is no longer there. We know from other countries like Egypt, which also does not recognize the Baháʼí religion on ID cards, that such illiberal bureaucratic policies can have grave consequences for people’s status as citizens and for their everyday lives.”