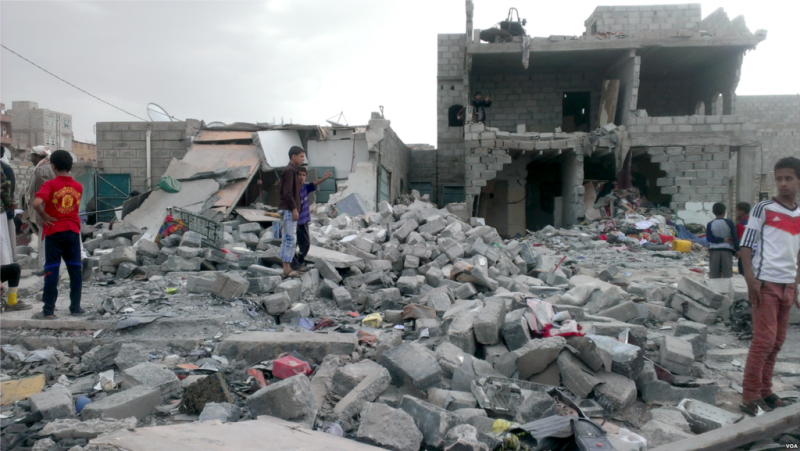 In October 2015, buildings in a neighborhood in Sana'a, Yemen lie in rubble months after an airstrike. Photo by Almigdad Mojalli. Public domain by Voice of America.

Yemen, which has been embroiled in an armed conflict since Iran-backed Houthi rebels ousted the government in September 2014, is considered the worst humanitarian crisis of this century. Around 80 per cent of the population is in need of urgent humanitarian assistance and this month, as Yemenis celebrated their fifth Eid-Al-Fitr since the conflict began, they suffer the accumulated agony of war and related diseases—and also COVID-19.

Although the first case of COVID-19 was officially confirmed in Yemen on April 10, today the virus has spread all over the country; the number of infections now stands at 278 and 57 people have died. The unreported numbers are feared to be much bigger. The novel coronavirus also circulates in Yemen alongside other deadly diseases such as malaria, cholera, dengue fever and Chikungunya.

On March 25, United Nations Secretary-General António Guterres called on warring factions in Yemen to cease hostilities and focus their efforts on dealing with the virus. Saudi Arabia made a unilateral ceasefire decision in April, but the conflict in Yemen continued. While leaders have stalled on a unified response to ending the violence to deal with the virus, several activist groups are pushing forward a ceasefire agenda, calling for an end to the long-standing conflict.

These factors, in addition to ongoing threats from extremist groups in some parts of the country, have rendered Yemen a fragile state with a collapsing economy. Yemen’s fragile infrastructure and feeble economy cannot withstand the potentially devastating impact of COVID-19, which has brought far more robust economies to their knees.

A society in denial

Despite the fragility of Yemen’s health system, there is widespread social and political denial about the gravity of COVID-19. Although some temporary curfews have been imposed by the de facto authorities in various regions, people are not staying at home or adhering to social distancing measures.  While half of the world’s population lives under varying degrees of lockdowns and stay-at-home orders, Yemenis have continued to go about their daily business—including religious and social gatherings related to the recently concluded holy month of Ramadan and Eid celebrations—despite warnings that COVID-19 could turn Yemen into an even worse disaster zone.

Meanwhile, local politicians have neither acknowledged the enormity of this challenge nor suspended their internal disputes even for a brief moment, in order to collaborate and fight against this urgent public health challenge.

Secretary-General Guterres’ call for a ceasefire went unheeded and the Saudi-backed government continues to face two challenges: from separatists in the south and Houthis in the north. The armed conflict in the north includes a regional element, as Houthis continue to launch ballistic missiles toward Saudi Arabia and Saudi Arabia responds with airstrikes on Sana’a, the country’s largest city.

While leaders have failed to unify against COVID-19, however, Yemenis activists are working to transform this public health crisis into an opportunity for a ceasefire to be imposed.

The Women Solidarity Network, of which I am a member, issued a joined statement with eight other women’s groups on April 15, calling for a ceasefire and demanding that authorities from all political sides collaborate with civil society organizations to prepare for COVID-19 by creating quarantine areas, testing systems and training. Particularly at risk are internally displaced persons (IDP) and poor people.

COVID-19 has forced millions across the world to take their activities online. Perhaps this shift could present an opportunity to better facilitate the peace process in Yemen, by removing many of the usual logistical obstacles related to travel, visas, and accommodations. Online peace negotiations are not unprecedented. The Women Solidarity Network, which includes more than 250 women leaders spread across the globe, has also been holding regular virtual meetings facilitated by the Peace Track Initiative.

Moving Yemen peace talks online could allow leaders to dedicate more time to discussions that include stakeholders from around the world in different time zones. For example, the UN secretary-general’s envoy to Yemen, Martin Griffiths, has been holding talks online with various Yemeni political leaders.

Millions of Yemenis are suffering as a result of the war. Before thousands fall prey to COVID-19, politicians must realize they cannot fight the disease without collaboration.

Hooria Mashour is a political activist and human rights defender specialized in gender and transitional justice. She was minister of human rights in the Consensus Government between 2012 and 2014 and an official at the Women National Committee before that. Mashour is a member of the Women Solidarity Network and a recipient of the Peace Track Initiative Feminist Peace Fellowship.