Russia's doctors, paramedics, and ambulance drivers are struggling to be heard 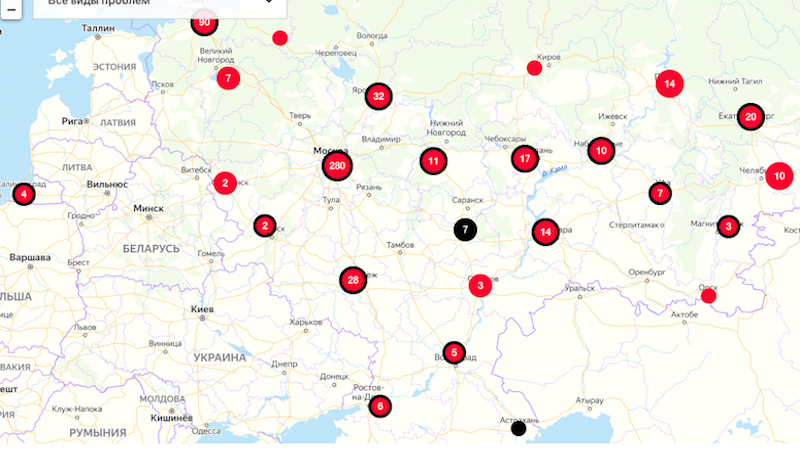 At the time of writing, Russia has 370,680 confirmed COVID-19 cases according to the Johns Hopkins University Map.

In recent days, Russian health officials have claimed that the situation may stabilise. However, severe regional outbreaks such as the recent spike of infections in Dagestan could jeopardise any slow recovery.

In these conditions, the country's medical system is under enormous strain.

That's why on May 20, the Doctors’ Alliance of Russia, an independent trade union founded in 2018, released an interactive map detailing the problems faced by hospitals across the country. A contact form allows medical staff to report a problem. Once these cases are verified by the trade union's staff, they are added to the map. In less than a week, the map has recorded 490 such problems, many connected with insufficient supplies of personal protective equipment (PPE), unpaid wages, or failure to test medical staff for COVID-19.

In the video below, founder of the Doctors’ Alliance Anastasia Vasilyeva introduces the new interactive map and calls on Russian officials to use the data to understand the true scale of the problem. Further categories for complaints will be added based on the nature of the appeals, she adds.

The Doctors’ Alliance has become increasingly prominent as Russia's COVID-19 crisis has developed. Its founder Anastasia Vasilyeva has shot to fame with her strident criticisms of the Russian authorities’ responses to the COVID-19 pandemic; she has also cast doubt on official COVID-19 statistics. Vasilyeva, a trained opthalmologist, became an activist after she attempted to challenge her mother's dismissal, and that of many other employees, from a Moscow clinic in 2018. One of the public figures she appealed to was the prominent opposition activist Alexey Navalny, whom she had treated a year before after an attacker threw chemical dye in his face. Navalny supported Vasilyeva's cause. Ever since, his Anti-Corruption Foundation has fought with the Doctors’ Alliance for better pay and conditions for medical staff, as part of its own bid to engage with independent trade unionism.

Like Navalny, the doctor-turned-activist regularly records short, accessible, and fiery YouTube videos. Vasilyeva has no shortage of material; the Doctors’ Alliance's VKontakte page brims with comments by medical staff voicing their frustrations with their workload and provisions.

Public attention has also been drawn to the plight of medical staff by several recent cases of frontline workers jumping to their deaths from windows. While some international publications have suggested foul play, more thorough reporting from The Independent suggests that many of these incidents may have been suicides — very probably prompted by the same conditions now being recorded on the interactive map.

In a YouTube interview taken two days after the interactive map went live, the trade union's press secretary Ivan Konovalov appeared to have high hopes for the project. Konovalov said that the issue of PPE supply had generally been the easiest to resolve in recent weeks; the Doctors’ Alliance not only delivers equipment itself but has also run a high-profile campaign on the issue for well over a month.

The most effective thing, of course, is publicity. Why do they speak so directly about their problems? We spoke about them, I guess, three weeks ago. As soon as May began, medics realised that nobody was planning to pay them for [their work] in April. So they began to turn to us. We told them to raise the issue publicly. Of course, at first they were all afraid, but bit by bit, one hospital started to appeal publicly, then another, and then there was a wave of appeals. And that wave, well, maybe it's not proper to say so, but it spread dramatically, almost like the coronavirus itself.

Interview with Ivan Konovalov, YouTube/VKontakte, May 22, 2020

Konovalov acknowledged in the same video that not all Russia's medics were even aware of the Doctors’ Alliance.

Nevertheless, such public appeals from doctors are a long-standing phenomenon among Russia's beleaguered medical staff. The Doctors’ Alliance did not start this trend. Neither did the coronavirus — Russia's healthcare system has been famously brittle for years, with staff regularly complaining about poor pay and overtime. According to reporting from Deutsche Welle last November, about ten percent of Russia's medics turn their backs on the state healthcare system every year.

But these angry messages have reached a fever pitch since the start of the COVID-19 pandemic. Medics from dozens of hospitals are now recording video appeals protesting against their lack of resources. Members of the Doctors’ Alliance who have tried to raise concerns about the state of medical provision have come under pressure in recent weeks (Vasilyeva herself was detained in April while delivering surgical masks to a rural town).

On May 7, police in Sochi opened an administrative case against Yulia Volkova, a doctor in a city clinic and local coordinator for the independent trade union. Following a video in which she requests personal protective equipment for local medical staff, Volkova was charged with “disseminating false information,” or fake news. “Ninety percent of employees are wandering around without face masks, but I'm the one destabilising the situation,” protested Volkova.

Volkova's protest was not unusual. In Ufa, several doctors have recorded videos to complain about the general conditions of their work; others, such as in Rubtsovsk, focused on the failure to pay promised bonuses to medical staff.

These bonuses, says Konovalov, feature in the majority of appeals he and his colleagues receive via the interactive map. In early April, President Vladimir Putin decreed extra monthly payouts of between 25,000 and 50,000 rubles (US$300-600) for frontline medical workers such as nurses, paramedics, and ambulance drivers. Doctors treating COVID-19 patients were to receive 80,000 rubles ($1,000). The Russian government set aside some 45.6 billion rubles ($619.7 m) for these payouts.

In mid-May many medical staff started to complain that they had yet to receive a kopek. An online petition demanding payment of the promised bonuses has now received over 116,000 signatures.

The Russian authorities appear to have taken notice: on May 19, the prosecutor's office launched a criminal case against the administration of a hospital in Armavir for non-payment of the promised bonuses.

It is not known whether this case was initiated due to the Doctors’ Alliance. However, the trade union's own social media accounts are now celebrating similar successes in holding hospital administrations to account for the treatment of medical staff during the pandemic, as shown by this letter, announcing a case against a hospital administration in the Krasnodar Region:

Here are the first results! A medic complained via our site about a violation, we filed a complaint with the supervisory bodies. Rospotrebnadzor launched an investigation and opened a case against the hospital and its head doctor. Speak up about your problems, it works.