"Over-exaggerated portrayal is definitely not something new" 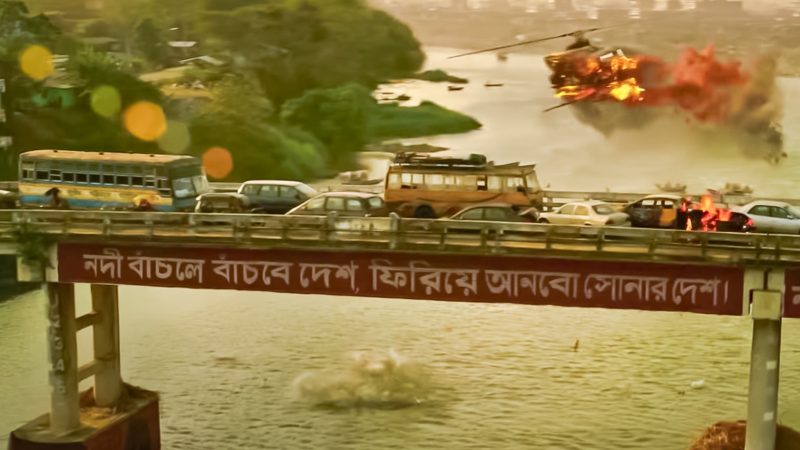 Screenshot from the trailer of Netflix Original movie Extraction showing a bridge in Dhaka, Bangladesh.

American action thriller and Netflix original “Extraction” (previously titled Dhaka) debuted on April 24, and quickly became the topmost watched title with 90 million views in its first 4 weeks. The movie drew a lot of interest from viewers in Bangladesh because the plot is based in the capital, Dhaka. However, it wasn't long after the film began streaming that it attracted criticism and debate for its inaccurate and stereotypical portrayal of Bangladesh and Bangladeshis.

The way Dhaka was shown in Extraction, the Netflix Original movie, it was ridiculous. They made it seem like Dhaka is full of slums which portrays how they look down to us. It's pathetic how they've shown the worst places in the world to be in Dhaka. Pathetic! #ExtractionNetflix

Extraction stars Chris Hemsworth of Avengers fame and is the directorial debut of famous Hollywood stunt coordinator Sam Hargrave. The film's protagonists, Tyler Rake (Chris Hemsworth) and Nik Khan (Golshifteh Farahani) take a mercenary job to rescue the son of an incarcerated Indian drug lord who was kidnapped by a Bangladeshi drug lord and smuggled somewhere in Dhaka. The movie was based on Ciudad, a graphic novel written by Ande Parks which is set in the real-life Paraguay town of Ciudad del Este. Joe and Anthony Russo adapted it for the screen, basing the story in a South Asian city instead.

Although the movie takes place in Bangladesh for most of its duration, it was predominantly filmed in the Indian cities, Ahmedabad and Mumbai, and also in Ban Pong, Thailand. However, some real images of Dhaka were used in the film, as Hargrave shared on his Instagram account.

Dhaka in “Extraction” versus Dhaka in real life pic.twitter.com/OdaqNcMkcs

Bangladeshi film critics complained about the lack of research into the local culture and the yellow filter used to depict Dhaka as a sickly, exotic location. They also criticized the portrayal of Bangladesh as a failed state as the storyline involves a drug lord who makes a senior Bangladeshi law enforcement officer deploy his army against Hemsworth's character.

Aminul Islam Emon, an architect based in Dhaka, commented on the movie after watching it:

Too much violence. There is no compelling story. The stunts and actions tried to compensate for this.

I watched the movie with interest to look at Dhaka city in the eyes of foreigners. Most Bangladeshis will dislike watching this movie. Because Dhaka has been portrayed in a very bad way.

Banker and film buff Muqit AL Rahman sent this review to Global Voices, highlighting the fact that the local casting was inaccurate:

How Dhaka has been portrayed can certainly irritate any Bangladeshis without a doubt. There are certain details which are at times annoying and at times funny e.g. many Bangladeshi characters speaking in Kolkata (from West Bengal, India) accent. Characters based in India having generic Bengali names such as Ovi and Saju is also unacceptable and last but not the least, the way Bangladeshi defence forces were portrayed in the movie was far from the truth.

Honestly speaking, in such movies over-exaggerated ultra-fantasized portrayal is definitely not something new. For a movie, with such a simple storyline, Dhaka could just be any random city from certain countries in Asia, South America and Africa. But, I would like to look positively at why Dhaka was chosen.

I could only watch the first 20 minutes of Extraction. The Bangla accents are pathetic… enough for what I have seen…

However, the reviews weren't all bad. Global Voices also interviewed copywriter and movie critic Reza A. Rabbi via email, who saw the film as an enjoyable action movie:

Screenplay, Actions and Locations are the areas where the director could show his magic and I think he did it pretty well. Especially the action sequences.

I did not see such raw and vibrant action sequences in any other Hollywood movie in recent past. Hargrave changed the original region – a city of Latin America where the events in the graphic book took place and replaced it with Dhaka, the capital of Bangladesh. If you are a Bangladeshi, you will spot the discrepancies in a minute. From the accent of local people to the details of the police forces and everything in between will be unsettling for you.

But if you look at other Hollywood movies set in an international location, you will see that lack of proper details and resemblance is not a new thing and you rather have loved those movies if they were not set in your own backyard. Apart from some drone shots, the whole Dhaka part of the movie was shot in India and Thailand.

And here I have to give full marks to the team. Although it had its issues, the details of their portrayal of Dhaka was eye-catching. Even in a 5-second shot, there were both static or dynamic things happening in the background that reminds you that it's Dhaka that you are watching.

So, as per story and screenplay goes, ‘Extraction’ is just another enjoyable action film from Hollywood which had a pretty much cliche story – Mercenary, Kidnapping, Extraction etc. But all in all, it was enjoyable and you got a previously undiscovered location.

The inclusion of this Bangla rap probably did bring some authenticity to the movie:

Any publicity is good publicity. [..] They wanted to give the viewers a new location. Netflix plans to have 100 million new subscribers in India in the next 5 years. So they are investing a lot of money on India related contents. This movie is an example of that. They also have to come to Bangladesh.

In view of the success of Extraction, Joe Russo has announced that a sequel is already in the works. However, Rafeul Hasan reminds Hollywood to take authenticity seriously the next time around:

Next time Hollywood centres a movie around Dhaka, they better get everything right down to the last details.