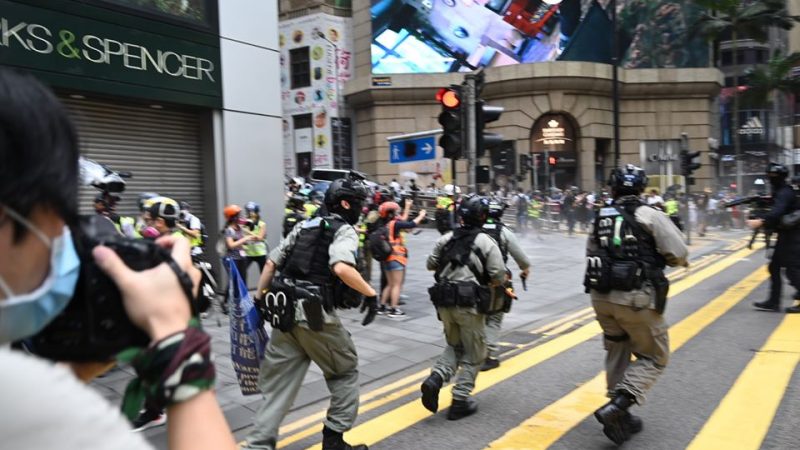 Police fired pepper rounds at Central District on May 27. Photo from inmediahk.net.

Hong Kong’s mass protests are back after China moved decisively to impose a series of mainland-style national security laws on the city, threatening what little remains of its autonomy.

After a rally last week against Beijing’s decision to promulgate tailor-made security legislation for Hong Kong, about 100 workers, business and student unions called for a general strike May 27-28.

Police responded by swarming the city to prevent protesters from getting near to the Legislative Council (LegCo) where a second reading of the controversial National Anthem Bill — another import from Beijing — had been scheduled. At least 300 protesters were arrested as of 5:30 PM local time.

One Country, One Police State?

Hong Kong-based Human Right researcher Patrick Poon said the police presence in the city on May 27 was similar to that witnessed in the Chinese capital during the National People's Congress (NPC) that finishes its work May 28:

Alongside the police concentration at government headquarters, heavy armed riot police were stationed along major roads and highways all around Hong Kong to prevent roadblocking.

Below is a screen capture from a protest map which indicated police checkpoints as of 6:47 AM on May 27.

#NOW at HK Cwb #Hysan Place. More than 50 people are stop and search by #police. pic.twitter.com/L2MRGCklBM

At around 1 PM protesters started walking from Causeway Bay and Central District towards the LegCo, Apple Daily reported on Twitter:

Protestors are gathering in #Central & #Causewaybay to oppose the #NationalAnthemBill. Police fired pepper balls in response.

In addition, civil servants and office workers entering office buildings located near or at the government headquarters had to show ID to police officers at various checkpoints. Some were searched:

#HK feels like a police state this morning. We’ve just been searched, as has nearly everyone heading towards Legco #HongKongProtests pic.twitter.com/VV8i4MPPUR

The China National Anthem Law was enforced in mainland China on October 1, 2017 and was inserted into Annex III of the Basic Law of Hong Kong a month later.

Laws listed in Annex III can be enacted in Hong Kong either by promulgation or by means of local legislation.

While the resolution tabled at China's National People’s Congress (NPC) on May 22 specifically stated that the Hong Kong National Security Law inserted into Annex III of the Basic Law would be enacted by means of promulgation, Beijing has allowed local legislation to determine how and when the national anthem law is enacted in Hong Kong.

The draft national anthem bill became a source of public concern as soon as it was published in January 2019.

The bill seeks to criminalize disrespect of the Chinese national anthem by requiring Hong Kong people to stand up whenever the anthem is heard in public.

Insults directed at the anthem — for instance, by changing its lyrics — will be punishable by up to three years imprisonment if the bill passes in the pro-Beijing LegCo.

By the time the legislation entered a second reading in the LegCo in June 2019, civil society's sights had been retrained on an even more controversial piece of legislation — the China Extradition Bill.

The scale and intensity of the anti-China extradition protests, which brought the city to a months-long standstill, caused readings of the National Anthem Bill to be suspended along with other legislation.

Deliberations on the bill were set to resume as the LegCo reopened in October 2019, but minority pro-democracy lawmakers used filibustering to postpone the election of the Chair of the House Committee, further delaying the second reading.

On April 13, Beijing stepped in, accusing opposition lawmakers of paralysing the legislature and not taking their oaths seriously.

Beijing’s statement was viewed by the general public as a threat to disqualify the filibustering lawmakers. A total of six pro-democracy lawmakers have been disqualified in recent years over oath-taking controversies.

Under pressure from the centre, pro-Beijing lawmakers in the LegCo had to act tough.

On May 8 and May 18, opposition lawmakers were physically thrown out of the House Committee by security guards under the instruction of LegCo president Andrew Leung Kwan-yuen.

The May 22 NPC resolution on the Hong Kong national security law added fuel to the fire as the LegCo returned to business May 27.

Thousands of protesters gathered at Causeway Bay on May 24 to express their anger over Beijing's move in the largest demonstration since the COVID-19 lockdown forced citizens off the streets.

A total of 193 protesters were arrested during the day-long demonstration.

Tear Gas City:
The police fired TG once again in the city center of Hong Kong, without any forms of disorder from the people. This is the future of Hong Kong under National Security Law: No freedom of assembly and speech.
Source: CUHK student press#HongKong#Protest pic.twitter.com/dYy8iOCCLI