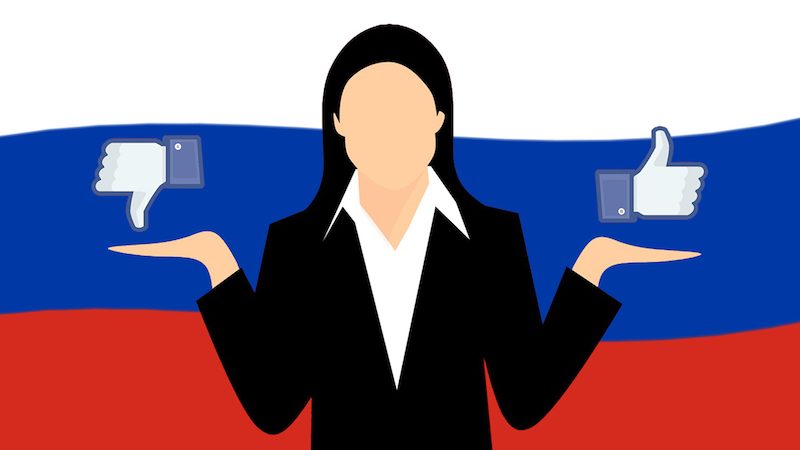 Remix of image by Mohamed_Hasan / Pixabay. Published under a simplified Pixabay licence.

Russia's parliament has passed a law to extend the possibility of “distance voting” — particularly online. The amendments to the country's Law on the Basic Guarantee of Electoral Rights now allow citizens across Russia to cast votes by post and online. The law was submitted for consideration by deputies from ruling party United Russia on March 2 and passed on March 13.

If that turnaround seems unusually quick, that could be because of the bill's provenance. On May 12, independent investigative outlet Proekt.Media reported on its Telegram channel that it was an initiative of the presidential administration.

The bill essentially removes any federal legal obstacles to expanding distance voting. This includes postal voting, which has not proven particularly popular in the past. In 2011 the Central Electoral Commission (CEC) clarified that postal voting was only permissible if allowed by regional law and if the voter could not visit the polling station in person. It also allows elections and referenda to be postponed if more than two districts of the region in question have declared an emergency situation.

Discussion about the bill's implications has been quite incoherent. For example, Dmitry Vyatkin, one of the bill's co-authors, told Interfax on May 13 that the bill did not oblige any regions to carry out voting in this manner but simply permitted them to do so if the CEC deemed it necessary. Vyatkin also implied that distance voting could have a very practical use in light of Russia's COVID-19 epidemic:

We don't know how long these restrictions will last, nor what the epidemiological situation will be. But these amendments must be passed before the election date is announced

In recent weeks, state officials have busied themselves with working out the practicalities of online voting.

So far, we know that voters will have to apply on the government's public services portal or to other sites approved by the Central Electoral Commission to cast a vote online. But it is not yet known which regions had taken steps to prepare for online voting themselves; CEC head Ella Pamfilova said on May 26 that while it was up to regions to request to the CEC to assist them in establishing online voting, none had yet done so as the date of Russia's next general election had not yet been determined.

It is fair to assume that no large-scale elections will be held under current conditions. This gives the Russian authorities more time to prepare, and perhaps perfect, methods of online voting based on past experience — which have seemingly brought only mixed success.

Voting online, before it was cool

Although the context of the COVID-19 pandemic may have increased the urgency of this bill, it's important to remember that Russia has a long history in experimenting with online voting.

In 2008, online voting was permitted as a non-binding option for voters in a handful of regional polling stations. President Dmitry Medvedev's government presented it, along with voting by telephone, as an ideal solution for both the government and its citizens — it could make elections cheaper to hold and would be convenient for Russian citizens overseas and in remote areas. By 2017, Russia's Central Electoral Commission had declared online voting to be its main priority, to be delivered by 2021 under the country's Programme for a Digital Economy.

But it is Moscow which has blazed a trail. In 2014, the capital's mayor Sergey Sobyanin launched the “active citizen” app, a system which allowed residents of the capital to have their say on non-political municipal decisions.

By the time Moscow's municipal elections came around in 2019, internet voting was ready to be rolled out and was put to the test in one single-member district of the capital. Absentee ballots were replaced by a “mobile voter” system which allowed voters to switch districts ahead of the vote either online or in person. But opposition members and election observers expressed doubts about the system; when its initiator Vyatkin was asked how it would function, he simply responded that it would use “blockchain technology” with little further elaboration.

Moscow's election day was marred by accusations of electoral fraud; protests erupted after dozens of independent opposition candidates were barred from competing on spurious bureaucratic grounds.

While these hurdles were linked to the usual system of collecting signatures in support of independent candidacies, the experimental online voting system was not free from criticism. The opposition figure Alexey Navalny alleged that two independent candidates in Moscow would have won had it not been for the results of online voting, and denounced it as a tool of electoral fraud. One of them, Roman Yuneman, even vowed to take his allegations of electronic voting fraud to the European Court of Human Rights (ECHR) if necessary.

Ultimately, only 9,810 Muscovites voted online. But this number seemed more significant when it emerged that these voters’ personal details were leaked around a week after the vote, suggesting problems with digital security.

Alexander Isavnin, a researcher at the Internet Protection Society, a Russian NGO defending digital rights, stated in an interview with RuNet Echo that the outcome of the Moscow elections did not give cause for hope:

The “success” of the Moscow “experiment” was the fact that society reacted rather sluggishly towards it, even though it was completely hellish. There was no control over voting lists, everything was simply conducted technologically and was supervised by employees of the mayoralty. There was no certainty as to whether voting was reliably anonymised, there was no certainty that it was the voters themselves who were voting, no tests or demonstrations of vulnerabilities were conducted, and so on. The point is that there are no reliable algorithms for secret voting which simultaneously guarantee secrecy of the vote and provide reliable identification of the voter. Not only in Russia, but in general.

Despite criticisms like these, the Duma also passed a bill this month extending Moscow's experiments with local electronic voting throughout 2020 and 2021.

Although COVID-19 is dominating the airwaves, these new electoral changes have not escaped the attention of more critical observers.

Sergey Smirnov, editor of the independent media outlet MediaZona, voiced concern at the use of a social welfare portal for voter registration:

That same day Lyubov Sobol, a prominent member of Navalny's Anti-Corruption Foundation, argued on Facebook that the authorities’ turn to online voting was its response to her colleagues’ “smart voting” initiative. This data-driven online tool allowed Muscovites to identify the strongest challenger to pro-government candidates in their precinct, regardless of their political allegiance.

United Russia politicians have justified the move by saying that it will allow voters to exercise their rights during an emergency.

Politicians from the “systemic opposition” (the three other parties permitted parliamentary representation alongside United Russia) also fiercely criticised the law after the vote. Gennady Zyuganov, head of the Communist Party (KPRF), told Svobodnaya Presa that “the entire system of administration in Russia is aimed at the theft of votes… everything concerning electronic voting is a complete scam.” As Oleg Sheinin, a deputy from A Just Russia, told Novaya Gazeta: “pretty much the entire opposition voted against this… it is a law which destroys voter privacy.”

Other analysts stress the potential role of expanded online voting in topping up the turnout, in order to enhance the legitimacy of future elections.

In his statement on the amendments Grigory Melkonyants, head of the Golos election monitoring NGO, lamented a “black day” for voters’ rights in Russia. Melkonyants pointed out that while the amendments technically empower regions to choose whether to use distance voting, the CEC can decide which requests to approve and deny — formally giving an institution under heavy influence of the federal authorities arbitrary power over the extent to which certain regions can implement online voting.

In a column for Novaya Gazeta on May 13, political scientist Vitaly Shklyarov raised Switzerland's experience with online voting, which was eventually abandoned due to perceived vulnerability and hacking attempts. What had the Kremlin learnt from overseas examples? Would the software be open source for full transparency? Unlikely, he argued — the Kremlin would declare it a state secret. Could these problems be overcome if blockchain technology were used? Unlikely, continued Shklyarov, given the small number of people familiar with it and the time pressure to prepare it in time for September 2020.

But most importantly, Shklyarov noted that internet votes have always amounted to a minimal share of the total. As such, officials wouldn't need to interfere with their content. If digital security proves to be brittle, then voters could easily be pressured by corrupt officials to vote as instructed — and this time, he stressed, it's impossible to spoil a ballot. The system will only accept completed votes.

The Duma has already approved holding electronic voting for Russia's next big election day; on September 13, 20 regions will elect their governors and 11 will elect members of their legislatures. In the event of another wave of COVID-19 infections breaking out in the autumn, citizens in quarantined regions would still be able to cast a vote — forgoing the need to delay election day any further.

But the burning question is whether these amendments will apply to a much-discussed referendum on constitutional amendments. The proposed changes are controversial as they will essentially “reset” the limits on Vladimir Putin's presidential terms, allowing him to hold onto power. That referendum was supposed to be held on April 22 but was reluctantly postponed in light of the pandemic, potentially until September.

There has been very little clarity so far as to whether the new amendments can apply to the referendum. Some legal experts claim that the voting procedure for the referendum was established when it was declared. In an interview with RIA Novosti, Vyatkin suggested otherwise; CEC secretary Maya Grishina stressed on May 13 that the amendments were made to a law which regulates elections and local plebiscites, not nationwide constitutional referendums.

Yet the very next day Nikolai Bulayev, deputy chairman of the CEC, told Kommersant that he could not rule out the use of online voting in the constitutional referendum.

The solution to this puzzle will soon become clear. As the Russian authorities cautiously relax their lockdown restrictions and permit large public events to take place once more, attention has returned to the referendum. As Bloomberg reports, Putin and his entourage appear eager to hold the referendum in June or July, before the president's approval ratings slip even lower.

The ever-present issue of ratings, as political scientist Maria Snegovaya has noted, may play a role the Kremlin's interest in holding the referendum on the same day as the delayed Victory Day parade.