"Why was the history of the Tharus always kept in dark?" 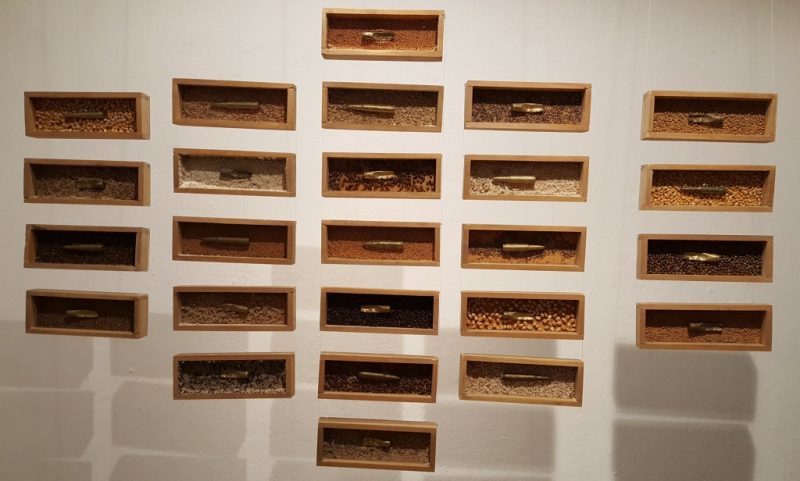 Some castes and ethnicities have been and continue to be marginalized in Nepal, and the Tharus, the fourth largest ethnic group in the country, are one of them. Through his art series ‘Masinya Dastoor’, Tharu artist Lavkant Chaudhary strives to tell their silenced stories by delving into the history of Tharu marginalization.

Chaudhary cites a six-month art research project looking into the history of the Tharu people as an eye-opening experience into the one-dimensional stereotypes about his own community :

All I came across were recurring stereotypical ideas about the Tharu. We were just water snail eaters, jungle dwellers, alcohol drinkers, and an honest tribe. That was our identity.

Global Voices author Sanjib Chaudhary caught up with Lavkant to talk about the history of the Tharus and how it has influenced his work.

Sanjib Chaudhary (SC): What inspired you to create artwork around social issues?

Lavkant Chaudhary (LC): I came to know about the marginalization of Tharus and other indigenous peoples only after completing my Bachelors of Fine Arts. Searching the history of Tharus, I came across the preconceived notions about the Tharus — like people living in the jungle and eating water snails, alcohol drinkers and honest tribe among others. However, the question kept hovering in my mind: Why was the history of Tharus always kept in dark in Nepal? So, I thought of asking this through my artworks. 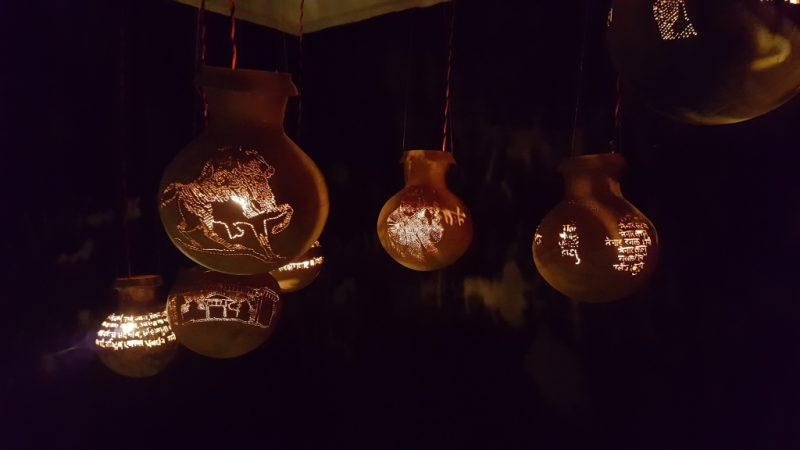 SC: What does ‘Masinya Dastoor’ mean? What are the artworks all about?

LC: My artwork revolve around displacement and resistance of Tharus, and the discrimination the community has faced at the hands of the state. Various ethnic groups including the Tharus were categorized as masinya matwali, which literally means enslavable alcohol drinkers, by the state through the Muluki Ain (National Code of 1854). The installation ‘Masinya’ comprises 13 ghaila (clay pots) with texts from different periods carved on their surfaces. The text ranges from statements from King Prithvi Narayan Shah who is credited for unifying Nepal to the Constitution of Nepal, 2015 – all of them have helped marginalize the indigenous peoples. 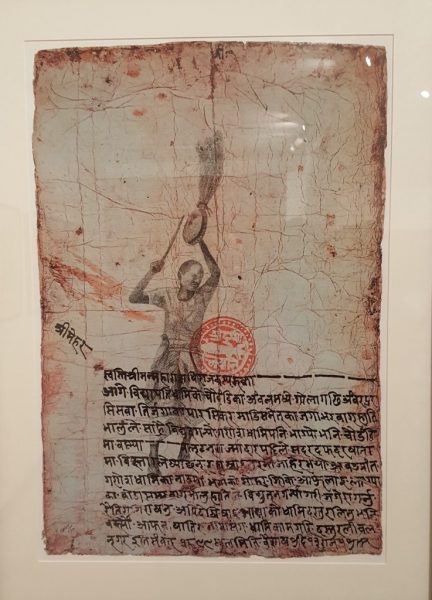 The ‘Tamasuk’ series tells the stories of systematic marginalization of Tharus. During the regime of autocratic rulers, the land belonging to Tharus were distributed and rewarded to different royal administrators and bureaucrats, leaving the Tharus landless in their own place. The kamaiya and kamalari system were introduced by which Tharu men, women, and their children could be traded as commodities.

In the ‘Dastoor’ series I have used official documents from different time periods in Nepali history as a backdrop for portraits of day-to-day Tharu activities. The documents, issued by the Sen, Shah and Rana rulers of Nepal, record the way different rulers issued dastoor (legal orders) to control native people in their own land by enforcing taxes. Heavy taxes, imposed on nearly everything, from land to water, forest to agriculture, and crops to animals, impoverished the Tharus and others.

Also read: ‘Opposite Dreams: The Politics of Local’: Art raises awareness around social issues in Nepal

SC: Your artwork ‘Ostracism’ contains grains and bullets. What does this mean?

LC: The cereals and grains symbolize the traditional land of the Tharus. The bullets then are placed on top of the grains to connote the systematic violence through which these lands were taken away. Although the grains get older and decompose, they still have the power to procreate. Perhaps resistance functions in a similar manner, growing out of centuries of violence.

SC: You’ve chosen an unusual and less attractive theme, a pesticide, as the inspiration for your artwork titled, ‘DDT’. Why did you choose it?

LC: DDT, also popularly known as ‘Dangerous Dose to Tharus’, is based on one of the silenced histories of the Tharu community. 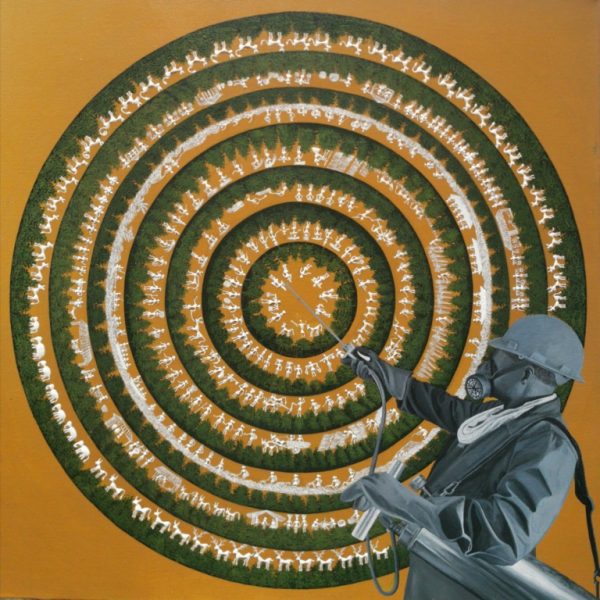 DDT. Artwork and photo by Lavkant Chaudhary. Used with permission.

During the 50s and 60s, with support from the United States of America and the World Health Organization (WHO), the Nepali Government led a campaign to eradicate malaria in the Terai region. This led to a mass migration of hill people to Terai and large scale of deforestation in the region. The spraying of DDT not only eradicated malaria and the Anopheles mosquitoes but also reduced the Tharus to a minority in their own land. In this painting, I have used a Tharu wall relief technique to paint various objects including images of humans. Each image is approximately the same size as a mosquito.

SC: You are quite vocal about the Tikapur incident and claim that mainstream media hasn’t dug out the real stories. What does ‘Citizen From the Land of Inequality Series’ say?

LC: During the Tikapur incident of August 24, 2015, and its aftermath seven police officers, a young child, and more than fifty people from the area were killed. The state played a big part in terrorizing the Tharu community by performing targeted arrests, killings and burning their houses. The Tharu community was portrayed as being ‘violent’ by the Nepali media, while the violence the community faced at the hands of state forces was ignored.

My artwork ‘Once There was a Village’ comprises a video of a miniature traditional village recreated using clay, bamboo, cardboard, ceramic pots, printed maps, glass, plywood, LED tubes. This work questions indigenous identity, rights, equality, and social discrimination. In the aftermath of the Tikapur incident, more than 88 houses were burnt, specifically targeting the houses of Tharus. The video begins with a Tharu folk song while eye witness accounts of the harsh suffering faced by Tikapur locals is heard as the houses burn.

SC: You’ve dealt with the issue of marginalization of the Tharu community in your artwork. Have you also tried telling the stories of Tharu individuals? 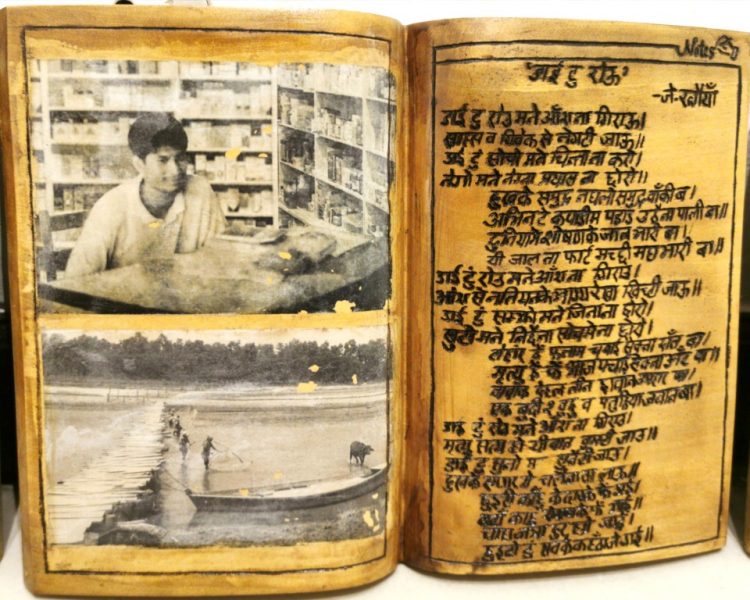 The Diary: Barefaced Truth of the Suppressed. Artwork and photo by Lavkant Chaudhary. Used with permission.

LC: My artwork ‘The Diary: Barefaced Truth of the Suppressed’ tells the story of Jokhan Ratgainya, a Tharu journalist, writer and revolutionary. I have recreated his diary by etching the texts and images on wood. Jokhan was murdered on June 11, 2001, by the then Royal Nepal Army at the time of the Civil War. This series depicts the situation of that period. It is rooted in the instability and killings faced by the Tharus of Far-Western Nepal at the hands of the Government of Nepal. People were arrested, murdered, and forcefully disappeared by the government in what came to be known as the ‘Operation Kilo Sera II’.

Some of Lavant's artwork can be seen on his Instagram page.