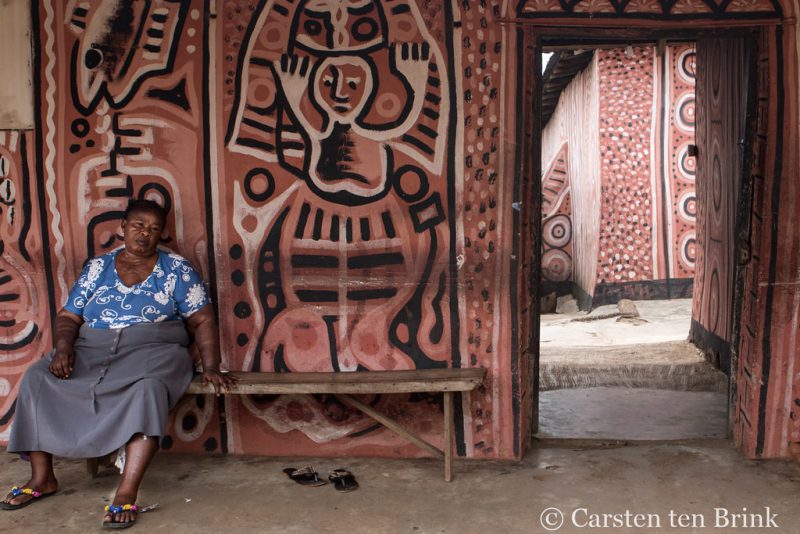 Editor’s note: This personal essay was written following a Twitter campaign [3] organized by Global Voices sub-Saharan Africa and Rising Voices where each week, a different language activist shared their perspectives on the intersection of digital rights and African Languages as part of the project, “The identity matrix: Platform regulation of online threats to expression in Africa.”

All groups of people in the world are identified by a unique culture and identity. Unfortunately, colonial incursion in Africa disrupted the pride that most Africans feel for their cultural identities — one of which is the erroneous narrative that Africa’s history only commenced [4] after the intrusion of European explorers.

This narrative is no longer tenable due to the ground-breaking work of African historians, like Kenneth Dike, who employs oral narratives [5] of our cultures instead of written histories. In addition, the codification of Yorùbá literature [6] in print and digital books reinforces the historicity of the language.

Yorùbá, a tonal language, is spoken by [7]some 30 million people in southwestern Nigeria, and in the neighboring countries of Benin, Togo and Sierra Leone. The language has about 100,000 speakers in the United Kingdom [8] and some 190,000 in the United States [9].

Yorùbá is not listed among [10] the endangered languages of the world, but is the Yorùbá language and culture safe? Will the coming generation identify with the Yorùbá culture or even speak the language in 100 years?

These questions motivated me to establish the Yobamoodua Cultural Heritage [11], an advocacy organization focused on the revival and documentation of the Yorùbá language in digital spaces.

“No man is an island” — or has a monopoly of knowledge. My people say ibi tí ọgbọ́n ẹnìkan pin sí ni ti ẹlòmìíràn ti bẹ̀rẹ̀ (“where one person’s wisdom terminates, there another person’s wisdom commences”).

For our world to advance, it needs to tap into diverse knowledge present in other regions of the world just like the adẹ́mu (“the palm wine tapper”) taps wine from the palm tree for everybody to consume. Besides, there are a million ways of doing the same thing. We say kò sí ibi tí a ì í kó ẹdìẹ alẹ́, omi ọbẹ̀ ló dùn ju ara wọn lọ (“we cook stews everywhere, only that one is more appetizing than another”).

Cultural values are core principles and ideals upon which an entire community exists. This encompasses all elements in the worldview of a people: Customs, made up of traditions and rituals; values or beliefs; and culture or a group’s guiding values. Cultural elements include food, folktales, fashion, philosophy, medicine, music, concepts, et cetera.

Language has been described as the conveyor belt of culture. Èdè ẹni ni ìdánimọ̀ ẹni (“one's language is one's identity”). Identity is embedded in the culture — the creative expression through which we tell our stories, remember the past and imagine the future.

Alas, the Yorùbá language is relegated to the rear on the internet and often gets trampled or ignored.

You cannot, for instance, mention a government agency or representative who is of Yorùbá origin in a tweet in the Yorùbá language and expect a reply. A rare reply often comes with a directive: “Please tweet in English.” When this happens, it makes me feel silly for tweeting in my language and looks as if I am communicating in a medium that no one is willing to hear.

And what about tacit hate speech or rather — “language hate” — that drives the Nigerian internet? I recall that I sent a direct message to an influencer who happens to be a Yorùbá man who writes his name in the Yorùbá language with the diacritics. Yet, he decided to ignore my candid questions — perhaps because I chose to write in the Yorùbá language!

But these encounters will not stop me from using my language — a store-house of experiences that must be preserved on the internet — because ‘ẹnìkan kì í pa ohùn mọ́ agogo lẹ́nu’ (“no one dares to silence the sound of the gong”). Anyone who attempts to stop me from communicating in my native lingua franca, attempts to halt the diffusion of my culture, and such a person hinders my right to freedom of expression.

Culture is a glue that brings people together, creates social solidarity and drives a vibrant community. Above all, economic benefits through cultural knowledge and creativity support thriving economies.

And culture is a right — both offline and online.

Opening digital spaces to all languages

My tweet for the week centered on the Internet Universality Indicators [12] or the ROAM principles promoted by the United Nations Educational, Scientific and Cultural Organisation (UNESCO). ROAM principles are four frameworks that measure compliance of the internet with human rights, openness, accessibility and multi-stakeholder participation.

I highlighted how sustainable development goals (SDG) — the blueprint [13] by the United Nations to achieve a “better and sustainable future for all” — will only be successful if the internet is open to everyone.

Every language and culture has the right to be freely and readily available online. However, this is not currently the case. The English language accounts for almost [14] 50 percent of the content online.

Most languages, like Yorùbá, are not readily accessible online due to a digital divide exacerbated by slow, expensive internet access in Africa.

This has also, sadly, hindered participation to promote cultural and linguistic diversity online.

For four days, I have been tweeting about the Yorùbá language & its Rights on the Internet. I've presented background info on the development of the Yorùbá orthography, its acceptance & how we have been employing tools on the digital space for advocacy. #IdentityMatrix [15] #Yoruba [16]

Lack of adequate support from government agencies and other organizations is a setback to the revival efforts by language and cultural heritage activists. Most funding opportunities are only available from external grant bodies and agencies — few come from within the continent.

Likewise, there are no government policies in Nigeria to push forward language resurrection activities and language activists are often left to carry the heavy cross alone.

On my Twitter handle (@yobamoodua [18]), I share the ancient knowledge of my ancestors to educate and motivate my followers to preserve our precious cultural heritage. I usually dedicate Wednesdays for questions and answers and usually, the winner receives a token of airtime data as a prize.

As a way of making terminologies which never existed in Yorùbá available, Yobamoodua [19] is creating new science and technology vocabularies. To further this initiative, I plan to organize a pioneering summit on the Yorùbá meta-languages before 2020 ends.

The knowledge of the world needs to circulate and this is why I created educational resources on climate change in the Yorùbá [20] language, as well.

To meet SDGs, we must create an environment for indigenous languages to flourish. Our world will advance when the internet becomes home to multiple languages. With a sense of belonging and pride, Yorùbá speakers like myself will sense that our culture and identity is safe online for generations unborn.

The Identity Matrix is funded by the Africa Digital Rights Fund [21]of The Collaboration on International ICT Policy for East and Southern Africa (CIPESA [22]).