As Brazil's COVID-19 figures soar, people grow desensitized to them 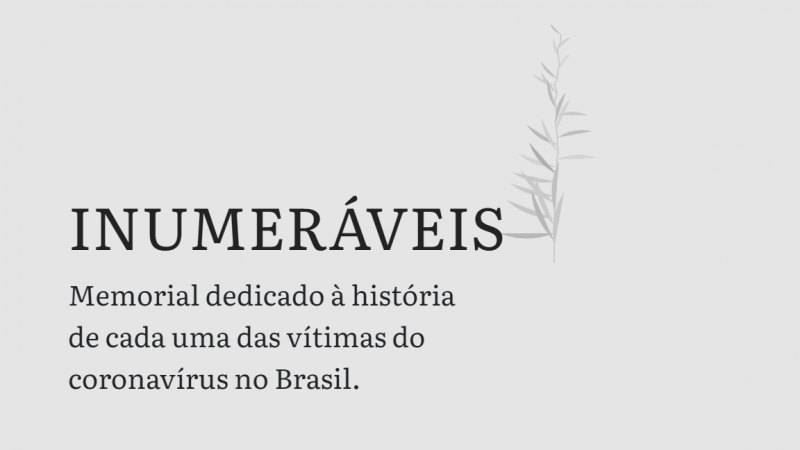 “The uncountable” — a memorial dedicated to the history of every victim of the coronavirus in Brazil. Screenshot.

On May 23, Brazil passed Russia to become the second worst-hit country from the COVID-19 pandemic in the world, behind only the United States. Two days before, it had registered its deadliest 24 hours yet: 1,188 dead from the disease, according to the Ministry of Health. As of May 25, COVID-19 has taken 23,473 lives in the 200-million nation among 374,898 cases confirmed.

Brazilians are gradually becoming accustomed to statistics breaking records each day. On May 6, when the total death toll reached 8,500, newscaster William Bonner, the anchor of TV Globo's 50-year-running prime-time news show Jornal Nacional, took a moment to reflect on what the numbers meant:

Eight thousand lives have ended. Those were lives of people loved by other people. Parents, siblings, children, friends, acquaintances. And then, these families’ grief stays just with them, because others are no longer capable to reflect on gravity of so many deaths pilling up daily.

Bonner's words resonated with many Brazilians who feel the human stories are getting lost behind the staggering figures. But one group of artists and writers decided to make sure they aren't forgotten.

“Inumeráveis,” or “the uncountable,” is an online memorial created by Brazilian artists Edson Pavoni and Rogério Oliveira that honors the lives of those who have died in the pandemic. Launched on April 30, it lists people's names, their ages, and a short obituary. About 20 people care for the site, be it by doing research, writing, or reviewing.

In a conversation with Global Voices over WhatsApp, Pavoni said:

You wake up and 68 people have died; you wake up the next day and 120 people have died; another day and it’s more than 200 people dead. After a while, those numbers start to lose their meaning and become a kind of clock, a warning, anything but people. And we become desensitized.

Pavoni had the idea for the memorial after his exhibition in Lisbon was canceled. He says he wanted to find a way to work the theme of “connection” while under social isolation. He then reached out to Oliveira, who was also unsettled by the growing numbers on the news.

The memorial's first obituaries were about the in-laws of a mutual friend — Edgar Farah, 81, the proud owner of a beige Volkswagen Beetle, and his wife Eunice Farah, 77, who spent this year's carnival partying with her children and grandchildren.

The list has currently just over 600 names — a long way still from the plus 20,000 deaths Brazil has so far recorded. Among them, there is  25-year-old Agatha, who loved cats and was attending nursing school while working at a health center at one of Rio's favelas.

And of legendary Brazilian composer and musician Aldir Blanc, or 101-year-old Julia Nieto Parra, who was born on a coffee farm, saw electricity come to homes and streets and had 17 grandchildren.

In a conversation with Global Voices, Pavoni noted that Brazilians are so overwhelmed with their own financial stability amid the crisis that it's easy for the statistics to become background noise. He says:

The numbers are not enough. They are not enough for each individual to understand the depth of the transformations and the historical moment we are living through.